No carrier ops like in FSX?
Really?
Slightly disappointed.

Lads, i think Touching Cloud’s F18 Warrior and PhotosbyKev’s carrier mod still remains your best bet of actually having carrier ops with friends in multiplayer. Shout out to Alex/Kev for their amazing work on the free mods on .TO

Just loaded the darkstar to egnt.ctd ■■■

I was really hoping that the carrier would be placed in the default world map for every day use just like how it is in FSX Acceleration. Had a lot of fun landing all sorts of inappropriate planes on that carrier, plus it was also good for the third party naval planes too.

Even freeware sometimes isn’t worth it if it cannot justify the disk space or add quality to the product, Grasshopper.

Yeah i agree… I have the F14 i would of liked to of landed on it. The F14 is Top Gun related after all

They give you two free airplanes (don’t forget that the F-18 was originally part of this) and yet there are those that are still not happy??? The F-18 is a blast to fly.

Well if you dont like it, There a delete the content option for DLC for a reason

The experimental aircraft can do 6,100mph?? So it’s hypersonic, then. Good job it’s only a film, I’m sure the heat generated by that sort of speed would obliterate the aircraft. Of course I’m happy to be corrected.

Yes, I know I sound like a bore. Lol.

I’ll give it a little look, but rather like the Reno stuff, I anticipate it being consigned to the bin relatively soon after.

It’s a movie tie in event, I don’t see why so many people are getting worked up about this.

I have already dissolved it into the ether.

I’d have preferred to see more attention being paid to fixing the awful state of the simulator on Xbox platforms to be honest - to many Xbox users the simulator is unplayable, for most of us it’s usable with limitations on what we can do - and much of the DLC available on the store (especially airports) causes CTDs - this last point is totally unacceptable for any store operation.
In short, to see this release being celebrated and pushed feels inappropriate to me and I’m sure many other Xbox users.

Update and DLC free addon worked like a champ. Took the new plane out for a flight. Also tried the new F-18 Livery.

So far looks and performing great! Will try some of the missions later today! 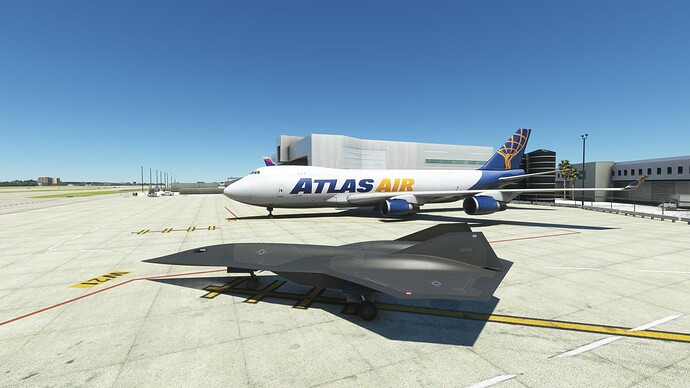 I think maybe Asobo should have done some expectation management with it. People were expecting moving aircraft carriers with working lifts etc, outside of the challenges.

You’ve got to remember this DLC would have been finished last summer and has just sat there waiting to be released.

should have done some expectation management

awefull marketing job with it

Read the rest of my post. People were expecting working aircraft carriers. Its been a hot topic of discussion on this forum for months now and for a lot of people the only thing about this DLC they were interested in or excited about.

Sad that it’s really hard for some to just be happy/grateful with Free Addons.

All we need is a toolbar widget to place the carrier scenery via a user menu, like the old AI Carriers tool or SWS Carriers Extended tool did for FSX and Prepar3D. You could also define the speed and path and they were moving with wake effects and so on. AI Carriers was a simple application (just few kb). Both allowed you to define your own formations. I mean, they were super versatile.

This shouldn´t be rocket science as the spawing was done via Simconnect. I can´t understand why something like that was not included.