By full setup I mean chair, yoke, throttle, rudder pedals and radio panel. I don’t buy or use instrument panels obviously as I see them in VR, but you can’t simulate a plane without having a yoke, throttle and pedals.

Totally overexposed, massively reduced textures, totally unnatural oversaturated colors, much poorer water display, often with steps in the water surface, which can cause a rollover when taking off and landing with seaplanes. These steps can also often be seen on land as blue lines.

The things you say did not come with Sim update 5. People were saying all that stuff before update 5 came along.
And those steps that you point out, which make your plane roll over and crash, well there are videos of that bug happening months ago. I’ve encountered them before myself. If you search on Google you’ll find examples.
ps. You say “massively reduced textures”, that’s only because they recalibrated the LoD settings in the options menu. Go into the CFG file instead, and edit Objects LoD and Textures LoDs both to 3.000000. Then you get back higher-rez textures when you are at a distance, or looking down from high cruise altitudes.

Oh, and one other thing: in Graphics Options make sure your “Render Scaling” is set to 100 or higher.

Ugh, no every user is having the issue.

Are you serious? It is a huge difference indeed, specially the quantity and quality of the houses/buildings. I am so sad to see this among with other graphical downgrades. I am on vacations far from home so I haven’t seen SU5 with my own eyes.

You haven’t seen the SU5 ? How can you be so sure then, about houses/buildings ? To prove your point you should show us some examples of houses/buildings… What I’ve seen sofar is more flickering. When it settles down, it looks the same…

In the opening video’s I see little or no difference at all between XBOX-X and PC… a bit in the reflections maybe… Also on tree distance, I don’t see differences… the XBOX-S seems downtuned (medium ?) and XBOX-X does the same as PC.

Of course, with a 3080 under the hood, you want more… To get that, I’d suggest go Search for Sliders in the Wish List category. Sliders for LOD, sliders for trees… You’ll see a lot of proposals about the subject of scenery quality. Just support these proposals ! Use your vote ! As a screenshot fan, I voted for all of them. I’d like to be able tune my PC performance down to do 1FpS, then I take my screenshot… It is always a tradeoff, there is no conspiracy.

And yes, they tuned things. They did that with SU-4 (not 5). Now suppose they would not have done that… this forum would now be filled with XBox-users complaining about scenery quality on PC’s being far better, or FpS far worse on XBox. They would state: “XBox-users have been treated as kids”,

Now instead, PC users with high end GPU’s are frustrated MSFS looks the same on a $800 XBOX-X

see video… issue is… what would you prefer, being marketing folks ? Pssing off 10 million new XBOX- customers with differences in favour of PC, or letting the 2 million PC have the same as XBOX-X, like above video shows ? I think there is no issue, this is all temporarily… It will all be solved, when the sliders can be made available. If you want to accept 25FpS on your RTX 3080… you’ll have Ultra++ quality.

In the greatest contempt of the PC gamers who paid a game to be downgraded 1 year later all this to serve as a marketing campaign, abject.

Not pointing the finger directly at anyone here, and I don’t want to sound like an ■■■■ but I feel like there is some underlying console/pc master race thing going on here, alot of what I’ve read, in the hundreds of post on the forums is evident enough.

My thoughts, End users have always been subject to what ever the Devs and Publishers drive for through out the life cycle of any IP. MSFS is no different. Can’t we all just Share this amazing game and be Flexible with what we are given?

I know alot of noses got bent out of shape but the attitudes of the minority here are flabbergasting.

Take it or leave it.

Ugh, no, stop talking for others

If you look at your total of CPU usage and GPU the total still stays below 16gb, it’s odd.

I don’t think that’s odd. I’m running at 1440p resolution, not 4K.
4K needs more than twice the frame buffer VRAM memory usage in the GPU than does 1440p.
And I’ve also set my GPU so that it doesn’t triple-buffer with FS2020.

It can be done. 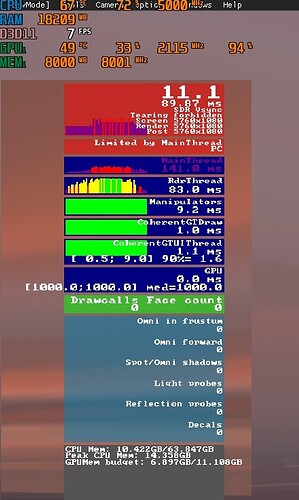 And yes I did a lap of NYC below teens

Must be more than 10 characters

The dispute is about nothing. Facts with which few would argue: 1. Have the color balance and saturation changed? 2. Have the LOD drawing settings changed? 3. Has the LOD quality changed?

I have listed 3 points with which even those who like SU5 in the form in which it is now do not argue most often. Someone says that you need to stop complaining and just change the LOD in the config. Someone advises to simply correct the gamma through third-party applications (nvidia), someone claims that this is normal, since reconfiguring the LOD loading system was needed to increase performance. I have simple questions: Why, after the update, we (users) have to come up with some workarounds? Why do you have to pay for “performance” with quality? Why say that in the future “additional graphics settings sliders” may be added if everything was fine before the upgrade to SU5 and nothing “additional” was required? If this is all a price to pay for performance improvements (new smart LOD rendering system, etc.), then it might be worth admitting that this new system is not performing well as it negatively impacted what everyone liked about previous patch?

And which person or department made the decision that everything in the game should now be tinted yellow and so bright? How was this question studied? Were taken for reference hundreds of real photos / videos from the cockpit, or did someone just say “I think this is better”?

… and yet the most basic reason for all this controversy, speculation and frustration is the complete absence of comments from the developers on these issues. Everything would have been decided and everyone would have calmed down hearing the answer “We see your concern. We will fix the color scheme, we will work on the LOD loading speed and quality and will optimize it” At the moment it looks like “They will shout and get used to it. They have no choice.”

Again, you are wasting your breath… somethings have definitely changed and/or are broken. We have to wait for the DEVELOPERS to FIX these issues, it’s really that simple… that’s what they get paid to do. Too many people throwing all kinds of crazy ideas up in the air here.

The trouble is that everything that I have so far heard from “official” sources on any issue with quality or important errors that came with the SU5 patch is NOTHING. There was something like “we were sure that it should work, but for some reason it does not work” after the hotfix. Is this supposed to calm us down somehow?

Of course, they will resolve the issues. We are just coming off a weekend. It’s definitely not the new standard, don’t let anyone make you believe that.

” At the moment it looks like “They will shout and get used to it. They have no choice.”

I concur. It’s quite remarkable.

The hotfix was a critical fix for the most serious CTD issues for the most severe cases. It doesn’t come close to all the issues that need to be fixed. This is usually a single error timeline fix. They are working their tales off to get issues resolved.

But you watched the video, right? Because we can clearly see the buildings popping on the SU5 vs SU4 comparison shots.