Hi! Has anyone tried the Okavango Delta add on by SimWorks? https://simworksstudios.com/okavango-delta-msfs.html Seems really cool!

I bought it yesterday and did a quick fly with the H135. It is really nice, today I start the animal spotting bush trip, I will report back later!

So far I can’t say I’m impressed. Have been flying around quite a while now, and most animals are clustered around the so-called camps. Some kind of luxury bungalow hotels.

All animals that I encountered so far are non-animated, even animals for which animated versions are available in MSFS already (elephants for example). The animals are clustered far too close together, and much too close to the buildings to be realistic. At one camp there’s a herd of some 50 giraffes surrounding the buildings with elephants close by.

Near or at the water, the animals are often not standing IN the water but are either hovering above the water or are “walking” on water. 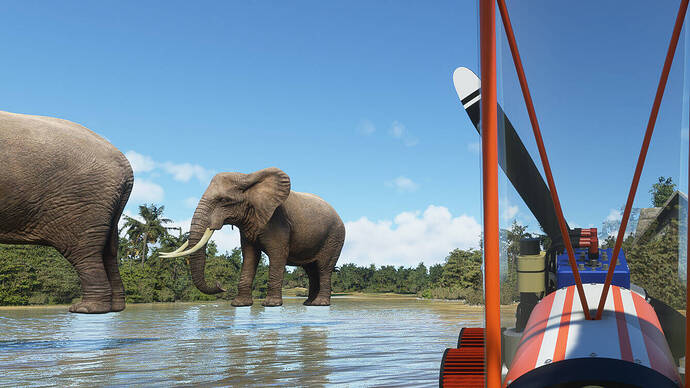 The camps themselves are not bad and also have some additional buildings like solar panels or shacks as well as some elevated walkways over the marshy and watery areas. This looks quite good. A few more vehicles, paths to connects the buildings and stuff like that would have been nice to make it look more real. Some airstrips look very barren as well. While some have at least thing a fuel tank or a shed or something, some others airstrips are lacking any sort of detail apart from a large fuel truck or a waiting jeep . 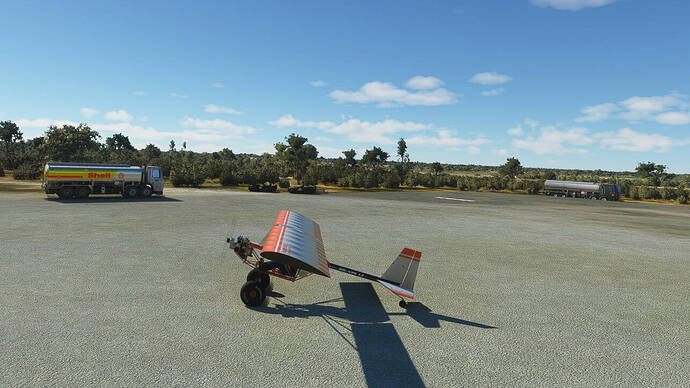 Another problem is: everything is just placed on the ground without any additional improved ground textures. In some areas that looks out of place because the standard resolution is quite low and since autogen also often does not create any grass or shrubs, which would be there in reality, it all looks rather artificial and unconvincing. This would have been possible in FSX as well. All contrary to the screenshots which look quite lively. And as long as you’re in an area with grass on the gorund and close to the buildings it works quite well. Flying over it even in slow planes like the Power Solo it mostly doesn’t work for me. At 1000ft altitude it looks very nice again, but that wasn’t the objective of this mod after all. 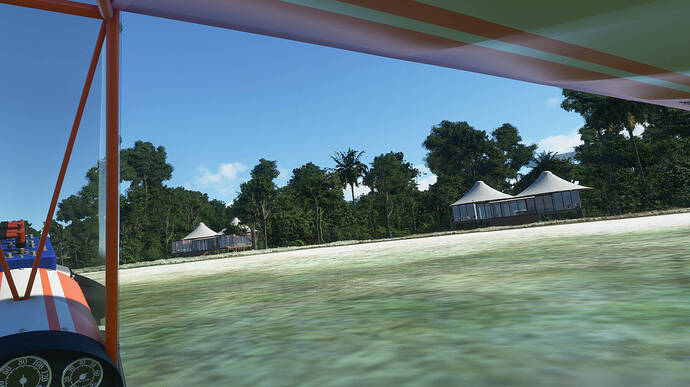 All in all I get the impression that much work has been put into the marketing side of the product. The photos, videos and also the brochure that comes with the download all promise much more that the product can deliver at the moment. It reminds me of the olden days, when one had no option but to book the vacation from the pictures of the catalogue. And finding out on arrival that the supposed luxury hotel is still under construction and that the beautiful beach is next to the entrance of the oil harbour.

So at the moment I don’t think it’s worth the money. While the area is gigantic, the additions are few and far between and not very diverse. Maybe they’ll improve it in the future.

All animals that I encountered so far are non-animated

I’ve just opened a ticket and reportet this as a bug.

A little head and tail movement - it wouldn’t take more to make everything look alive. In the current state we have lots of statues of animals and a few moving ones. I’m disappointed for the same reasons and I cannot recommend this scenery to anyone until at least the animals get animated.

Ah! Thanks for the tips. That’s a pity, I’ll keep an eye on it and see how they get on with it, if it gets developed, etc!

@Archer374’s impressions are right on the money, but on the other hand I think it does offer just enough to be worth its price tag. I personally am the sort who doesn’t see much point in spending 15-20 euros on an airport, so while many of the additions in Okavango Delta are underwhelming, the whole package does offer me something to do beyond the scope of the base sim and I like its vibe in general.

I started one of the bush trips with a herd of elephants marching across the runway and I am going to remember that moment for quite a while. Sadly, I enjoyed it a bit too much and forgot to take a screenshot. 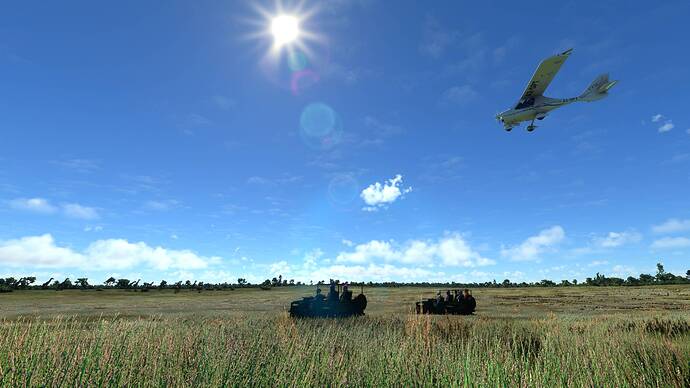 That would have been something nice. Moving cars, moving animals. That could make it more worthwhile for me too. But I only encountered static stuff (apart from the people in the bungalows you can’t see from the plane). If they manage to animate the animals and have some safari car’s driving around - bringing the whole thing to life - it would definitely be worth the money.

I am one of the Okavango developers and the sculptor of statues.

The reason that elephants and giraffes are statues (default btw) is because the animated versions are simobjects. As they cannot move without a Worldscrip(more later) they would be stationary animated animals standing upright. In the meantime, the CPU would be doing speed, altitude and contact point calculations which would bring the FPS down to 10. This is what happened when we tried it with 6000 animals, which is less than half of what is in there.

Worldscripts: a series of waypoimts that simobjects follow. This is how we put some moving elephangs and giraffes (default) across the delta to disrupt the static displays. There is no documentation on how to create these so that forced us to use some default ones to the extent it didn’t harm fps and go static with the rest. That also applies to vehicles.

For the custom animals, we opted for statics with a bit of animation on their tails, heads or breathing. Scenery and not simobjects for the same reasons as above.

Overall, animals are clustered where you would expect to find them IRL and keeping in mind the limitations of the sim when it comes to their application and population.

You can expect to find animals more often near water bodies than away from them. Some animals are limited to certain areas (hippos in the North for example), others are just rare (rhinos) and others abundant (elephants).

I hope that clarifies some of the design decisions. The scenery is vast but has to be able to run and be seen from a low flying aircraft. When the tools, sim and hardware allow for more, we will definitely jump on it.

Thank you! This is very clear actually just before reading this I bought the add on, I was just too curious and flew the first leg of the bush trip and enjoyed it very much! Just a question is fauna always in the exact same spot or are there areas where they can be found and each time they would be in different places in that area? Thanks.
Overall compared to the price of other add-ons it’s pretty cool. Perhaps the marketing could have been clear that fauna and vehicles where mostly static, but still it’s a very nice area to explore! Thanks

Edit: PS I really appreciate ensuring that there is no fps drop even if that means animals are static. After all this is a flight sim I don’t expect to land close to the animals and study their behaviour - but I do think that it is a tad oversold with all the encouragement to use drone cameras etc which would just mean looking at statues of animals!

Is there anything that can be done to cover up the low resolution base terrain textures in this area? That’s a bigger issue to me than the animals.

The bad terrain textures are due to the age and resolution of bing maps in the area, Africa seems to be 4-5 years old in the sim and Bing. Sattelite pictures could be introduced from us, but other than increasing the product cost a lot (it is a big area) and would introduce some technical challenges that we don’t want to address until the simulator is in a more completed state.

@xexets there are generally two types of animals: those that are stationary and can be found in the same spots all the time and some that travel across the delta. The latter can be found near some airports and they might even cross a runway sometimes (random). Travelling animals can also be found together with other animals, or roaming between water bodies. We know how many they are but don’t know where exactly they are as they spawn randomly near their start locations and always move. I think that’s the idea.

Going from memory, I remember seeing some near Guma, to the North of Mombo and between Abu and Nxabega.

I bought it. It’s pretty nice so far. Flew the Caravan Bush Trip.

What’s this discussion I read somewhere about you guys doing a driveable jeep? Or is that hearsay?

We are working on a drivable jeep which will be a separate release-freeware.

Nice! Looking forward to that! Imagine the possibilities to take a jeep around the Okavango delta!
You guys did something pretty special here. I am happy to have it.

Finally I got some time to take a flight around the Delta and I enjoyed it a lot.

Thank you @SiRRiPPERORiG and team for bringing more life to MSFS!

There are some texture issues and limitations indeed, but for me it’s still fine as long as I fly in a reasonable altitude.

In RL nobody in the right mind would fly only few feet away from the wildlife anyway.
I remember it was not easy at all to find animals from the air smaller than elephants or giraffes when I was there.

What I’m missing is some more navigational information.

So far I couldn’t find any VFR charts for the Okavango Delta on the web at all, not even pay ware.

The included map provides the camp names and ICAOs and for planes with GPS it’s ok.
But without GPS you’re lost or you have to spawn every time new from the desired airfield.

However there is the Maun navaid in the south which covers the Okavango Delta.

So I’ve put a list with radials and distances to that navaid to be able to navigate without GPS.

Maybe you could include such or even better navigational information in a future update.

I have visited Okavango Delta in real life and I must say that this scenery for MSFs is excellent. Great job.

Yes, I got it today and was just about to take off from one of the airports and as I opened up the throttle a heard of elephants decided to cross the runway so I closed the throttle and waited for them to cross.

Glad to see people like it, it has been a big project but very unique, adding all that fine detail while keeping performance good. We are still working on the scenery, fixing bugs and looking for ways to squeeze more FPS out of it, in order to add more animals.

For me, i like it, just a bit overpriced for what it is, but ok immersion experience. Waiting for the car to be able to commute from airports to camps.