Welcome to the City of Sails!

First impression screenshots below. As a local who has flown over the city countless times, I’ve been looking forward to this one all year and am certainly not disappointed!

It’s great to finally see recognisable 3D counterparts of all the CBD buildings replacing the generic autogen tower blocks. The skyline of the city centre is pretty unique, and it looks fantastic in the sim early morning or evening with the PBR texturing. 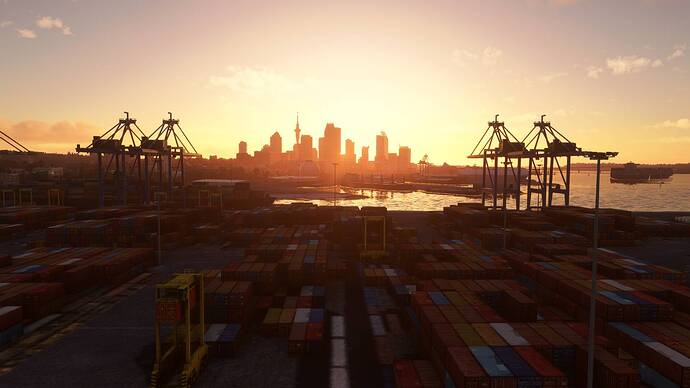 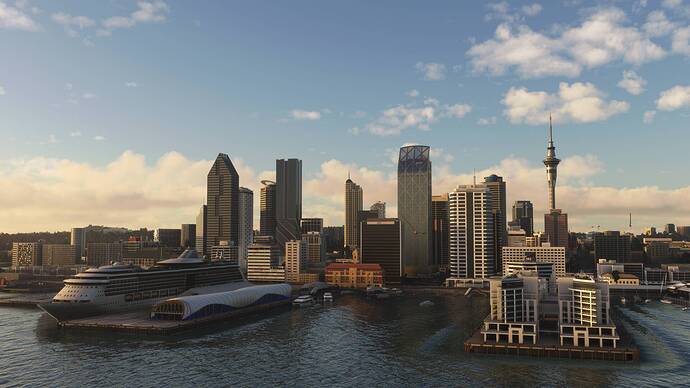 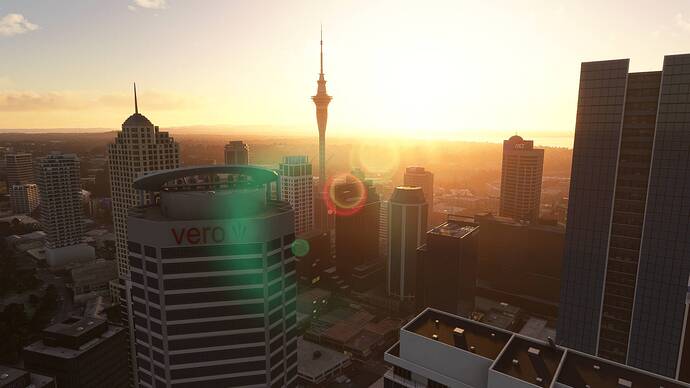 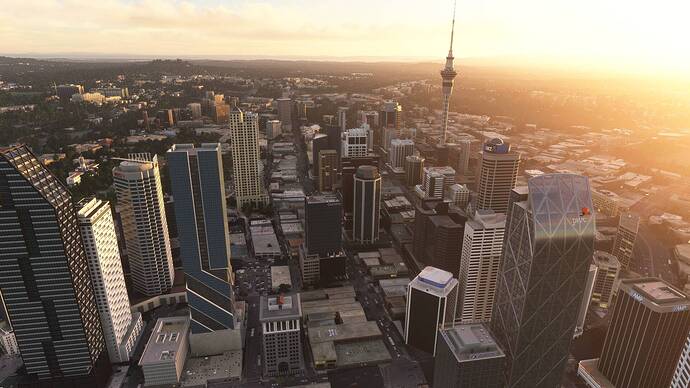 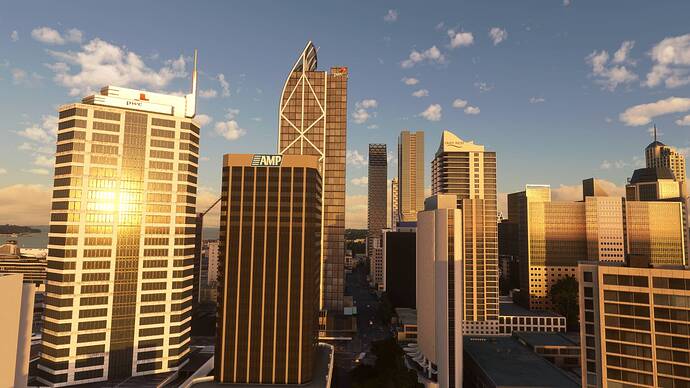 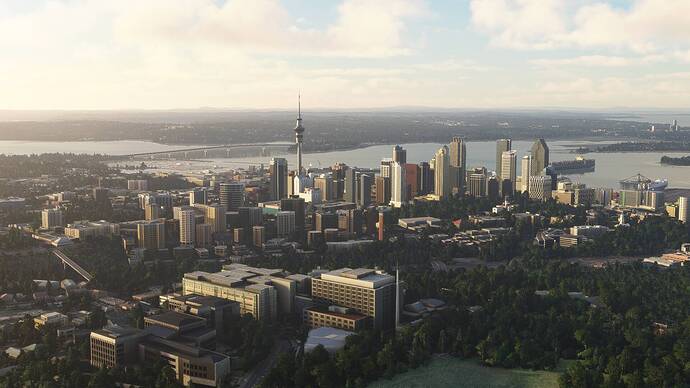 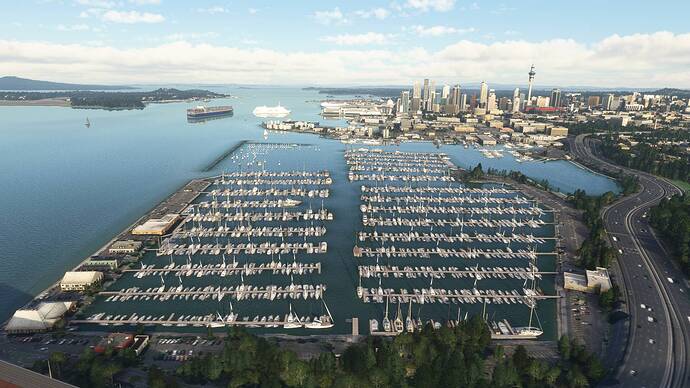 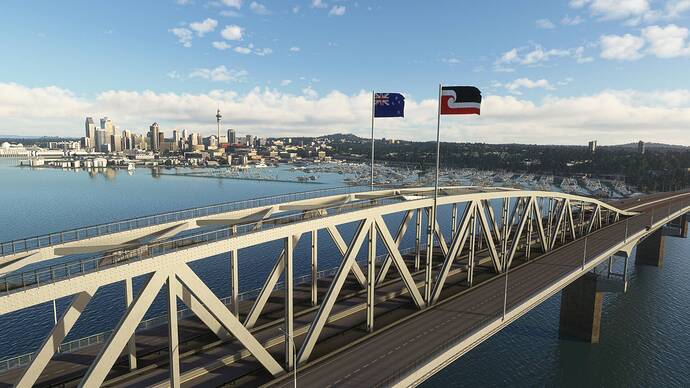 I’m stoked with how much detail was given to the harbors too- with Westhaven Marina, the largest in the Southern Hemisphere actually visible now and 3D boats moored at the jetties, as well as animated boat traffic on the Waitamata.

A huge photoreal groundplate stretches nearly the entire width of the city with higher res ground textures replacing the Bing maps data. It includes watermasking of the many estuaries and bays (all be it at very low tide) and is a huge improvement from default. 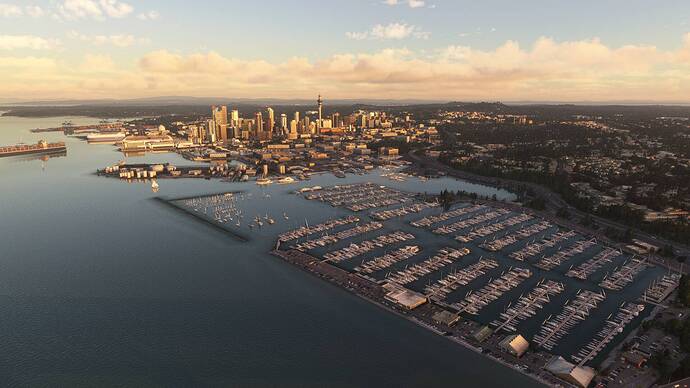 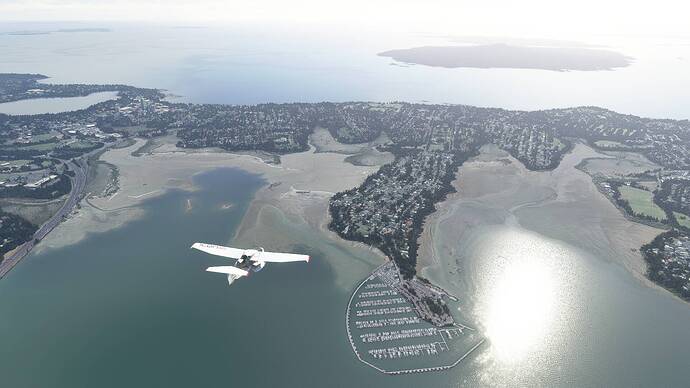 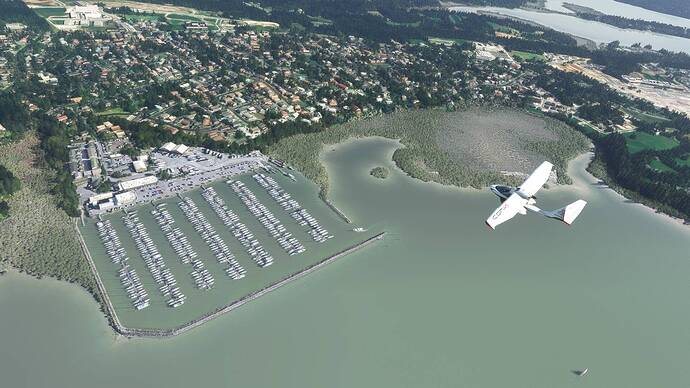 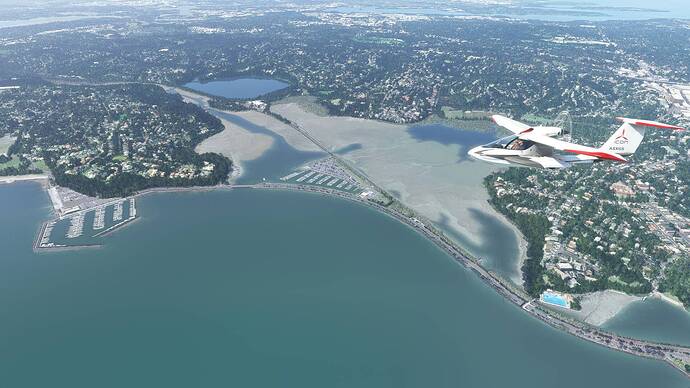 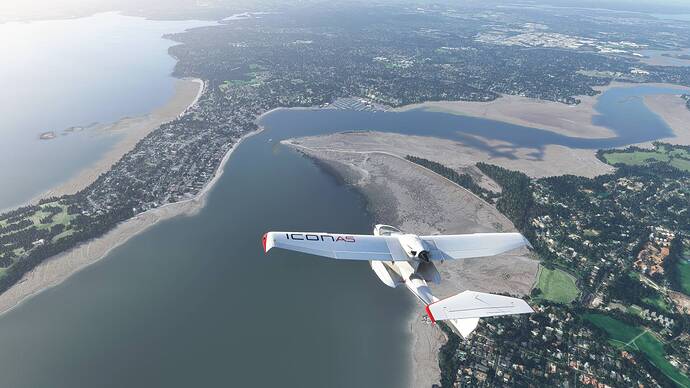 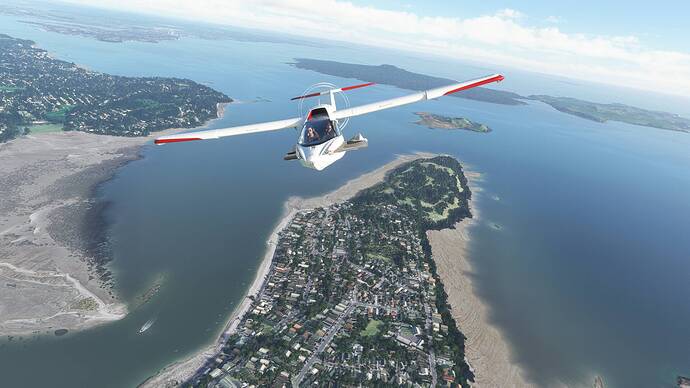 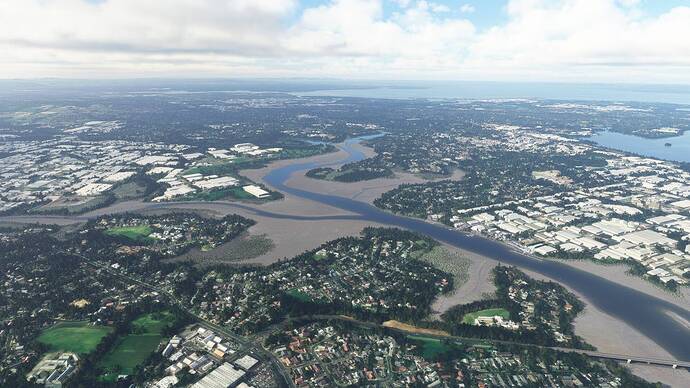 Yes the Sky Tower and other sky scrapers look really good,the helipad on the ASB building is handy if you need cash in a hurry!!!
They (ORBX) have made a pretty good job of this ,just needs a bit more detail .The heli pads at Mecanics Bay spring to mind.I like all the warships with heli pads.Would be nice if they had our actual ships there instead of what looks like someone elses navy.
Love the Huey parked at Mechanics Bay.

Has Devonport Navy Base received any love ?

Lets hope Flightbeam releases the airport very soon, deffo will get both.

This looks good. Love Auckland, visited a couple of times, it’s a beautiful city.
I like the way ORBX has given some attention to the water masking here, with the mud flats visible, nice touch. Could do with some of that in other areas of the world like around the Wirral / Liverpool bay instead of it being constantly flooded. Nice job by ORBX will pick this up later

Just had a brief flight around to check it out and spotted the edge walkers and Skyjumper on the Skytower! 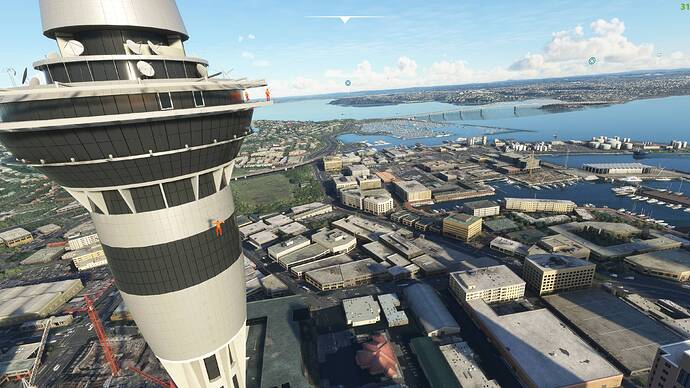 screenshot.1143816×2148 1.24 MB
It’s a close call whether this pack is greatly better than the freeware Auckland packs, but that little Easter Egg makes it worthwhile for me.
I’m slightly disappointed that they haven’t modelled Holy Trinity cathedral and St. Marys, as it is quite a prominent feature in the cityscape. But I think overall it’s a good buy. 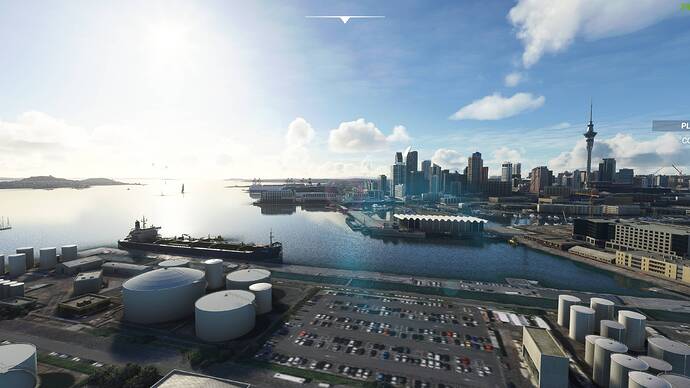 Anyone else getting really bad framerates when the CBD is in view, I mean I expected some drop off but I’m seeing drops from 35ish to 19 or so.

Initially I had a scenery double up with a freeware version but even with that resolved it seems unexpectedly heavy on the system.

For reference I can fly around NY quite happily at 30fps and the ORBX Sydney addon works similarly. Auckland though tanks my framerate. 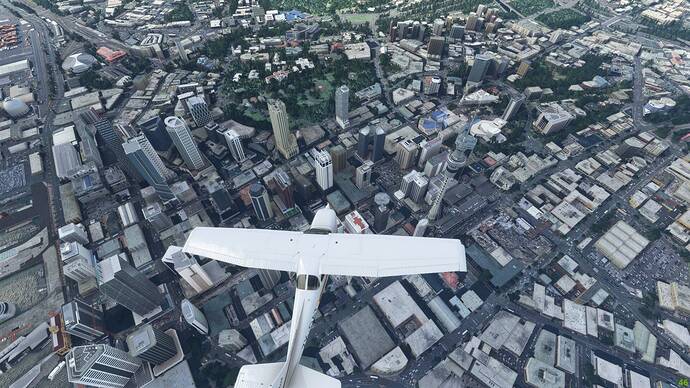 Yup. Has several warships moored that mostly line up with current RNZN vessels. Buildings have a bit of love too.

Does it drop much with and without the cbd in view?

Has Devonport Navy Base received any love ? 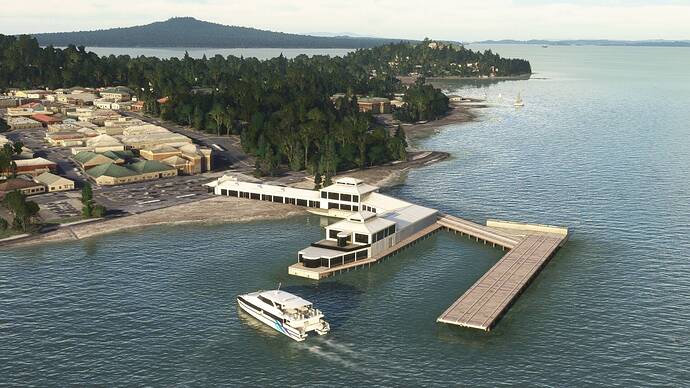 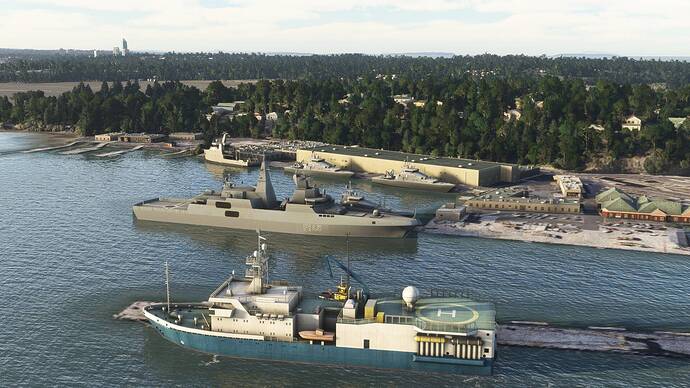 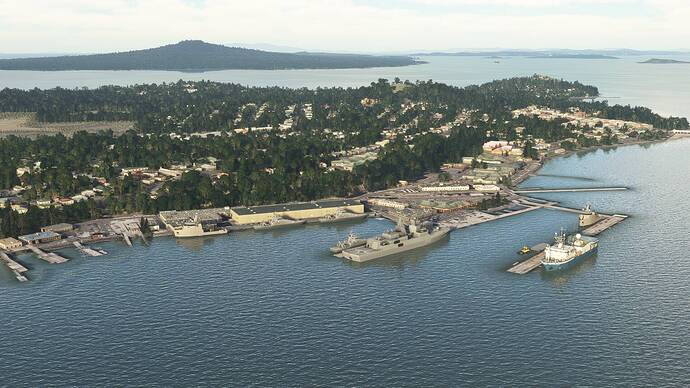 Does it drop much with and without the cbd in view?

Negative- just did a trial flight around with the FPS counter up the whole time and performance remains consistent for me. It sounds like you may have a possible conflict with another addon?

Interesting I’ll do some experiments

overall would recommend the pack…
however I seem to have many completely static boats with wakes! that look weird (not so much the larger cruise ship but the smaller sail boats in mid channel).

I am also running the seafront global shipping addon - but presume the static boats are from the auckland pack - is there anyway to disable them?

however I seem to have many completely static boats with wakes! that look weird (not so much the larger cruise ship but the smaller sail boats in mid channel).

I have noticed the same @mac2244 and it doesn’t look quite right to see some boats with a wake trail and others without. On a busy day on the Waitamata, there are wake trails criss crossing all over the place which can be seen very clearly from above: 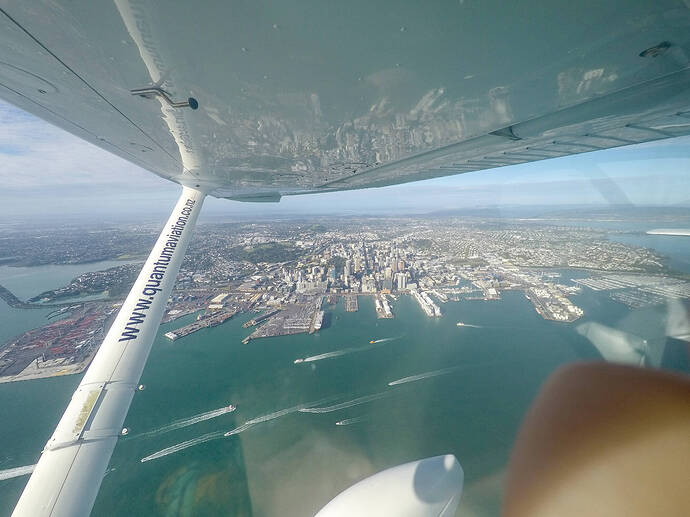 I did note on yesterdays Dev Q&A that adding wake to generic AI ships is on the to do list, expected in 2022. However I expect it would require an update from Orbx to add the visual FX to thier custom placed watercraft.

For those who are interested, I’ve created an Auckland City Scenic flightplan on worldtour.flights based on a pretty commonly flown circuit out of NZAR: https://worldtour.flights/flightplans/162

I am also running the seafront global shipping addon - but presume the static boats are from the auckland pack - is there anyway to disable them?

The wakes look like they are from satellite images, so if you get rid of those ships, you get to see a ship under it from the satelite images, which will looks much worse.

actually I think the static sail boats with wakes does look slightly ridiculous so maybe should just be removed (the cruise liners and warships are ok).
note I also use all the seafront add ons which gives proper moving ships with wakes which looks much better…

I’m also finding Orbx Auckland has some extremely FPS sapping areas, just like Orbx Brisbane does. It seems to be just a certain building or object that does it. Glancing in the direction of the offending object sends my GPU usage from its normal 70%/75% straight up to 99% and frames absolutely plummet.

I’m seeing this as well, really hope they can fix it, probaby some misconfigured lod.