Orbz NZ mesh released but I won't be buying it. Here is why

Firstly I want to make it clear that this thread is in no way anti Orbx. I think they did a phenomenal job on this addon and I am glad they found a fix for the terrain morphing issue.

But I won’t be buying it. Period. This fix should have been provided by Asobo. I dont want to spend hundreds of dollars to fix the morphing terrain for the entire planet. This is the issue that has been raised multiple times on this forum and in Q&As and has been consistently ignored by devs. We still don’t have an eta on the fix.

It’s your money and I can’t and won’t stop you from buying such addons but you should know that the responsibility falls on Asobo to fix the various terrain issues that plague the sim. Last thing we need is mesh addons for MSFS. It’s like fsx/p3d all over again.

Agreed, this type of thing should be first party fixes. The terrain morphing and bubbling problems are not too egregious, I was just flying around Morocco and the terrain looked phenomenal, so if it can look good there it can look good everywhere.

Sure it is Asobo’s responsability, but come on they recreated the entire earth ! It’s so big and so long to find and fix all mesh issues, while at the same time adressing other one that simmers can encounter with planes, airports, cities, etc…

I agree with you that it’s worthless to pay for add-on about mesh, as Asobo will fix it one day or another. It surely takes time but they are doing the job, step after step. We need to be patient.

Anyone know of or could be kind enough to provide before/after images? They do say they plan 1m meshes in the future from lidar (satellite lidar? How does that work?), but the 10m mesh doesn’t sound that different from what I see most places by default? I may sit this one out until the higher res mesh is out. And I sure hope there’s some bespoke work on airports and city scenery for NZ. I tried flying out of Wellington and the auto gen just was so generic and blah, it didn’t feel like Wellington at all. Maybe there’s community improvements for airports and cities I just haven’t stumbled on. I should look.

NZ is an amazingly beautiful country, amazing flying to be had. I just have been underwhelmed when I’ve tried flying many places there, so I mostly gave up. But I’m sure there are great spots I missed.

Anyways, YES, Asobo default meshes could be better in general, the lack of any sharp rocky anything, everything being rounded unless at a distance is very unfortunate and so is the LOD shifting. So, I’ll buy add on meshes, but they better look great close up and I don’t see 10m meshes looking great close up in the craggy mountains.

Yesterday, Orbx announced they would be bringing a new form of technology to Microsoft Flight Simulator that enhances the default mesh of specific regions. Today, they have released NZ Mesh for the

Some befores and afters here.

I can’t imagine the manpower it would take for them to make sure every area is perfect. Consider this, there are hundreds of community developers creating addon sceneries and airports each day and even with the sim being released 9 months ago there is still work to be done.

With that in mind I think you can understand why it’s not a reasonable expectation for Asobo to have the entire globe perfected when even the hivemind of hundreds of community developers haven’t been able to accomplish that.

Oh man, that is an improvement. OK, now I am, A: very tempted to buy it, B: even more upset at how mushy and inaccurate the default mountains are, C: very hopeful ORBX does British Columbia next!!!

But I do wonder how well this will work with trees and other objects placed on the default meshes? Does this add on adjust them to the height of the new mesh? Sounds complex.

My apologies, I didn’t get it that way. I though GridRisen was talking about the mesh issues that can usually takes place randomly in some places like Norway with terrain gliches, mesa or wrong river altitudes.

Constant morphing is for sure a huge and global bug that was introduced by last updates and need adressing by Asobo, I do agree.

I can’t imagine the manpower it would take for them to make sure every area is perfect. Consider this, there are hundreds of community developers creating addon sceneries and airports each day and even with the sim being released 9 months ago there is still work to be done.

That’s why we have computers. It’s not a matter of doing this stuff by hand but developing the tools to take care of it for you so the work is done faster. Given the way roads, bridges, rivers and lakes are handled by Asobo’s code, I fear they don’t have the skill set to pull it off.

You do you I guess… 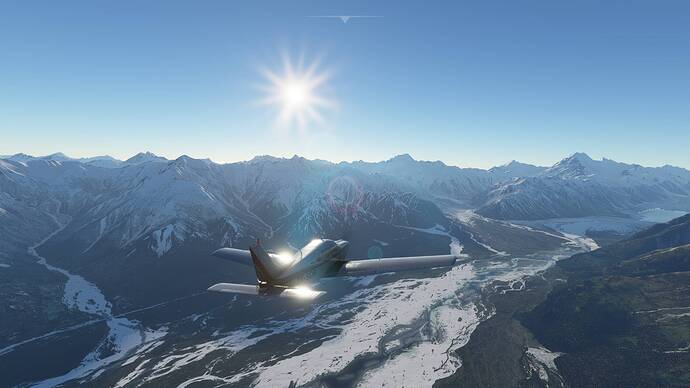 This product is a really nice improvement though, flew around the alps a bit and they look lovely and sharp. There was still a little bit of terrain lod switching but it’s not as noticeable.

If we’re all in agreement this is a huge task for any company, why are we holding Asobo to this unreasonable expectation?

I just think we should focus on the good they’ve done, allow payware developers to go into extreme for overlooked areas and let the users decide where their money goes.

MFS is a platform and I for one love all the action from the community and payware developers - it keeps the scene fun.

It’s a fine sentiment but over time, extrapolating out the cost model, these type of mesh fixes covering, conservatively, 50 regions that have issues would run the users (ie:us) to about $500 each. Making a mountain look like a mountain should not be beyond Asobo and their software engineers capabilities.

It’s certainly an interesting product.
Judging from the World Updates up to now, and the improvements on the simulator’s mesh from Asobo, I don’t think I’ll be buying 10m resolution meshes anytime soon - seems like something that will be included sooner or later.

I truly understand your argument, I just think the ecosystem is fine and well balanced. Users do a good job of reviewing addons and helping other users make informed decisions.

I’ve probably spent over $500 in the sim already between addon aircraft and airports, but with over 1K hours in sim I feel I’m still getting a good value.

A 2 hour movie will set you back $20 which is $10 per hour. My 1000 hours in sim would equate to $0.50 per hour and because most devs offer good post launch support in time my investment will have an even better ROI.

I have a few paid for several addons, the planes are great (and I would happily pay for the Hype helicopter, with steam gauges though, the digital displays don’t work for me in VR but that’s another discussion), the airports, less so since many have bugs that will probably never be fixed. I understand the value of a paid add-on but mesh updates are not something I would be willing the pay for and as @SteepFarez points out, detailed data exists for free, so why haven’t Asobo used it?

Thanks for the kind words about the Hype helicopter, I’m here as an user right now though - I just want to clarify my stance here isn’t as dev but as a consumer.

In terms of why they aren’t using the free data, I’m not sure - I don’t think Asobo would ignore it unless there’s a good reason they can’t use it.

There’s a few annoying areas to me that I wonder why they aren’t done well, but I just keep reminding myself that this stuff ain’t easy.

I do enjoy looking at scenery, that’s my major delight in the sim. But I’ve looked at the before/after images shown in the first link and frankly although I do see a change, to me it’s not as much as I would have hoped and as such for now I won’t be buying it. No disrespect to Orbx (I have a ciuple of their addons which I am more than happy with) but this does very little for.
Asobo have done a fine job with what they’ve been given but they can’t be expected to be able to do everything straight away, so I’ll wait for them.

…as @SteepFarez points out, detailed data exists for free, so why haven’t Asobo used it?

Probably because New Zealand isn’t a priority. I would expect we will get a world update in the future which would include better DEM data among other things, but they’re targeting the more populous regions at the moment.

I am hesitant to buy this addon, while I have a few friends using it who swear by it, I don’t want to buy an addon that could be redundant in a years time.