Over 1 million players to date

“As of today the community has flown more than 26 million flights and logged more than 1 billion miles – the equivalent of flying around the world over 40 thousand times.” 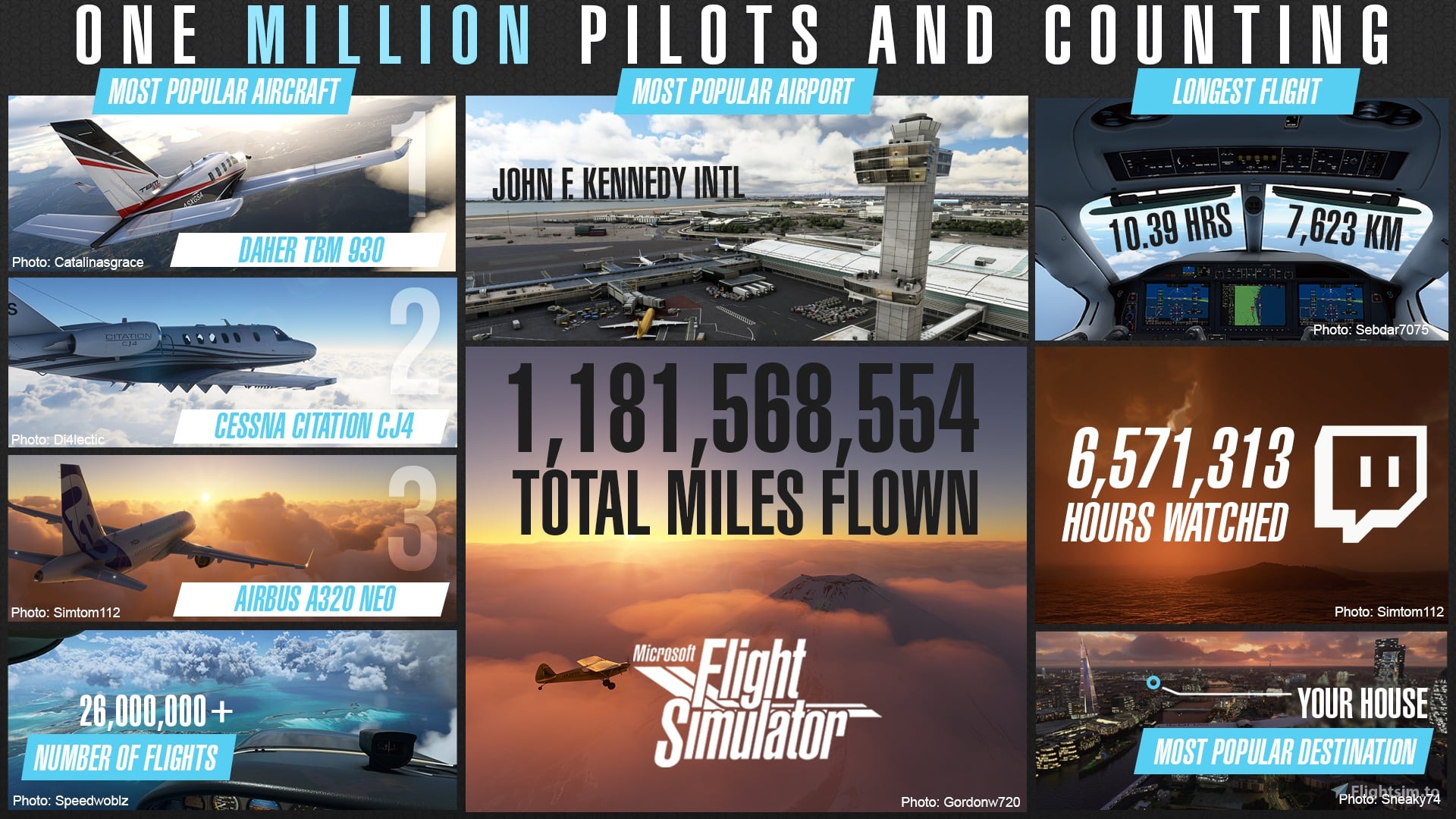 Microsoft Flight Simulator is the biggest game launch in Xbox Game Pass for...

This news was released 6 weeks ago.

I hadn’t seen that, so thanks @AthenaGrey1

From where does MS get that data? From our log books on our PC’s?

Probably it’s from the server statistics.

Its probably a bug too. lol

Thanks for bringing us this extremely fresh and juicy news

From where does MS get that data? From our log books on our PC’s?

All games with online features nowadays have extended telemetry that allows developers to gather data on what players do.

Thanks, but is that not general info (and IMO a privacy concern perhaps)? Does x-plane have that, without a disabling function?
Also, perhaps my wording mistake. What I actually wanted to know is if the log book is on our PC or on Cloud.

Depends on the telemetry, but the EULA of the games usually warn you that data is being recorded.

I have already given you a lot of likes. I have just given you another for avoiding the question.
(joke)

haha, can’t respond with details a question in which I don’t know the details.

I only know that such telemetry is an industry standard for games with online connection and that it varies depending on developer.

I don’t know what exactly is recorded, but for instance some RPG and FPS developers record where everyone dies and have detailed heatmaps of deaths and kills over time so that they may see where the maps may need improvement.

OK, I’ll leave it at that and will take care nobody kills me (not even for my unwanted posts) and that I don’t leave a heatmap in the event of my imminent death.

Well, you can double those numbers at the top as MSFS 2020 only seems capable of logging about half my flights. Sure wish the flight abacus would get repaired soon.

And the real question is…how much of them are still flying?

If their logging works as well as the log books in MSFS, I wouldn’t put too much weight in that.

Probably about 99% are still flying and enjoying of this beautiful sim, which is only getting better all the time.
Only whiners have dropped out, and that’s good.

EDIT:
Sorry… I was being rude…
I meant to say only whiners and kids who can’t use computers have dropped out… and that’s even better.

Only whiners have dropped out, and that’s good.

You have to take things into perspective a bit with those numbers.

Many of those people who “bought” the game were ones using the Gamepass $1 thing, and not people who actually bought the game for full price. A very high percentage were likely not people interested in a civilian flight sim at all.

There was a lot of hype surrounding MSFS when it launched over its graphics. To an extent, that was warranted, at least when it comes to flight sims. Even with the graphical issues we’re currently experiencing (bad LOD, blurred textures, etc), it still looks better than anything else out there. A lot of people will have gotten on board for that reason. Some of them will have stayed, but that will have limited appeal to others.

I suspect it’s not so much the “whiners” that have left, but more like the ADHD-stricken "game o’ the week’ kids with the attention span of a squirrel on meth. They played it a bit, saw there was zero instant gratification, no blowing up of things, and no potential for griefing other players. Those will be the ones that moved on to something new.

And the real question is…how much of them are still flying?

Exactly. I just had a really great flight in FS9. I went from CYYZ to KJFK in the HJG DC9-30. Weather worked and so did everything about the aircraft and sim. It was very relaxing to have everything work like it’s supposed to. I read the forum hoping that MSFS will improve. So far all I’ve seen is it getting worse. For now I have canceled my XBox For PC subscription. I didn’t buy the new sim. I am enjoying FS9 again. Flying airliners I don’t care about the pretty scenery. And before one of the fanboys say I am not a real simmer I am. I have used every sim since Sublogic and still sim several hours per day. With me I want a sim that works. And one where the planes work also. With MSFS all I see is a pretty scenery simulator. Nothing more at this point. I am hoping that changes. But I doubt it will.