It gathers some doubts about this aircraft. All in relation to the PA44 in the MFS2020.

I am afraid that none of what you describe here sounds like a bug to me, but as you become more experienced, you will cope better with the myriad things that the environment or the sim will throw at you.

I think my English is worse than I thought.

I apologize to everyone for the rudeness of my limited English.

1-Yes, I must be quick about the battery. But the GPU should provide the necessary energy for as long as I need it. I was wondering if Carenado’s GPU is just an ornament or if it really works. If it works, I don’t know how to activate it.

2-The question that I reported about the Mixture, is the image below.
The 100% mixture creates RPM movement in the engine, even with the other Idle levers. This causes the aircraft to move on the ground and I need to taxi using the fuel mixture.
How do I solve this? 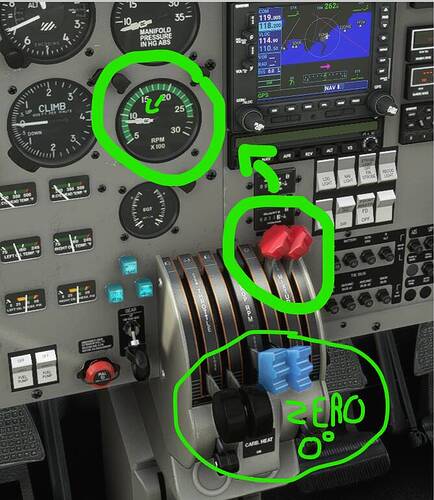 Your English is fine.

I don’t know about the GPU but yes it should give you power and I suspect they have a bug. As for taxiing I have this issue too and suspect they have the idle speed set too high. This was often a problem with Carenado planes in X Plane as well. This is a bug as well. With zero pitch like in your picture the plane should not be moving. I have this plane also and have been doing the same as you to get around the issue.

Thank you for your replies.

I was devouring the Aircraft Manual looking for answers to these questions.

Yes, do not fly in the clouds when the air temperature in the vicinity of your plane is below 1C. It may be warmer on the ground, but it could be colder in the sky, and any moisture will freeze on you. I haven’t seen it myself yet, but, if the dew point is above the air temperature, you might accumulate ice from that as well, even without clouds. What I do is create a keybind to the three “Deice” commands you can access in the controls menus for the Keyboard, Deice Windshield, Structure, and Propeller. Not real for the plane, but, then again, the icing isn’t real either.

GPU, I have no clue. I agree that should work, but I don’t know if it was implemented, and there’s no way for us to check the code as the package is encrypted.

Have you flown a real PA44 and know that the plane doesn’t move with the throttle at idle? That would be my first question. When I start the Warrior I fly, I have to keep my feet on the brakes (or, I set the parking brake, and I still hold the brakes with my feet.) or the plane will move. As the other person said, don’t be afraid to use the brakes when taxiing.

Your description of your questions was fine, I fully understood your questions. The only change to your message I would have made would be to say “I have some questions about this aircraft”, the rest was perfect.