The last few updates have ruined the optimisation of the game.
I’ve tried it on a 10900k,64gb ram, 3090 setup and a 9700k, 2090ti, 16gb ram setup and both are facing unbearable stutter and erratic framerates. Especially in areas with photogrammetry. Lowering settings doesnt help.

Chiming in to provide another example of a customer seeing these problems.

I have had FPS deteriorate down to around 8FPS on a strong gaming system.

Example of where I’ve seen this problem: Mountains ~ 50Miles East of Seattle (importantly, not in a dense urban area).

What I am seeing is an issue with a single CPU thread maxing out - clearly visible when looking at Task Manager. GPU jogging along at around 20%.

Anecdotally, I reckon that main memory usage seems to be typically 5-6Gb higher than previous.

Regardless of irregular extreme performance drops , overall, FPS perforamcne is significantly down since update 3 . Previously I would see ~45FPS in and around NYC, now I’m typically seeing ~30 -FPS in rural locations.

It’s the CPU, or rather one thread having problems, maxing out one logical processor. The GPU usage drops since it has nothing to do but wait for the CPU to ask for the next frame.

Check in the task manager, performance, CPU, view logical processors. One will be maxed when your GPU usage drops and FPS tanks.

This is exactly what I am seeing. Frame rate as shown by nvidia overlay drops from high 40s into teens. Task Manager shows a single logical processor (always 15 on initial checks) maxed out. As soon as usage on that processor drops below 100%, back up to 40+ fps. Not tied to specific scenery or conditions, has happened coming in to a fairly quiet airport like KCOS, or up at FL440. Fly mainly WT CJ4 or Longitude w/ flight dynamics mod.

Edit: I should note this is not a complaint and overall I’ve been very happy learning this, as this is my first sim. Just wanted to note the same symptoms were being seen.

Maybe there are multiple bugs. I got the one processor fully taxed bug in the world map, crippling my frame rate even when backing out of the world map in the menus. 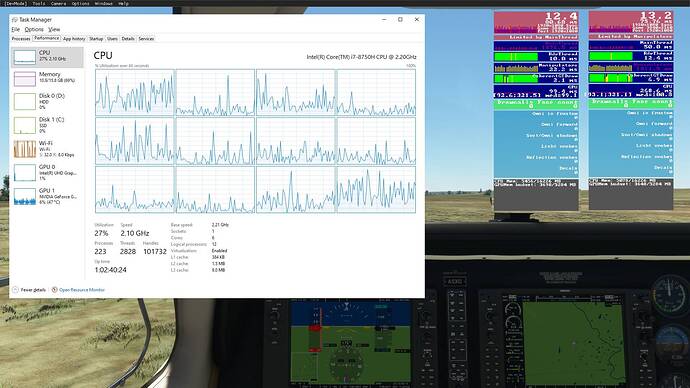 I get random drops while flying normally as well, not that bad as above there but still a crippling drop in fps without being able to identify any direct cause for it. RAM, GPU, CPU all have plenty resources to spare.

Something very weird is going on here. I start a flight at EDDF with high settings at ca. 16-18 fps, take off with this frameate, reach a certain altitude. The framerate suddenly jumps to 30 fps and stays there all the time when I land back in the same airport. These are the fps that I used to get before the last update. Comparable drops occur everywhere in the world and are suddenly gone again. Please fix, and please stop introducing new (severe) problems with each and every update. I would really like to start using this sim after so many months of frustration.

After a few hours of testing… I found for me a few settings that seem to have helped reduce the stuttering.
In Nvidia settings…
pre render frame to 4
power management - prefer maximum performance.

I have seen a noticeable reduction in stuttering and pauses with only a tiny FPS drop.

Give these settings a go and see if they help.

I think it has something to do with the trees, man… 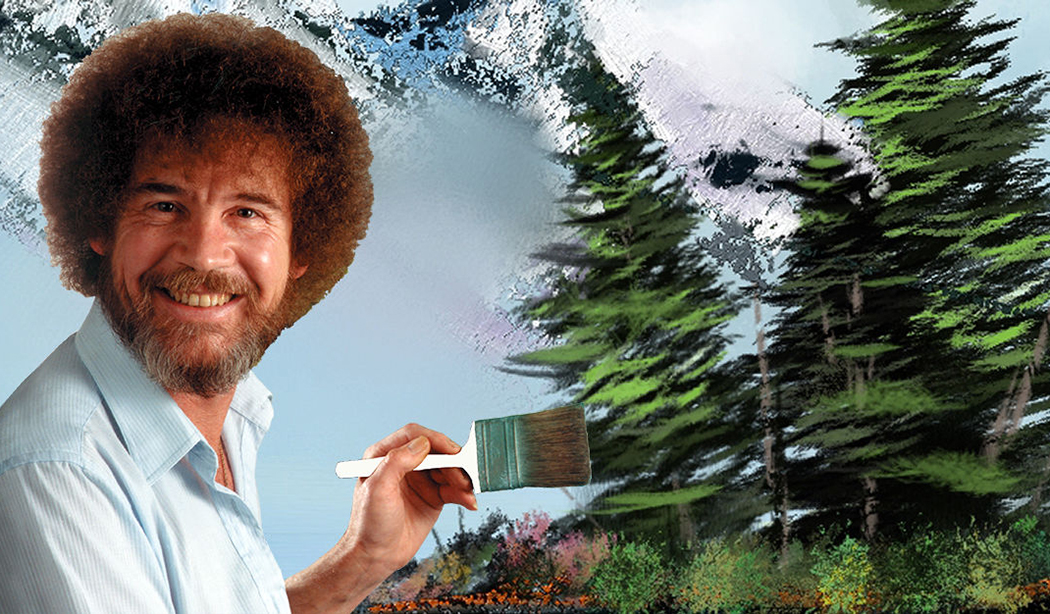 Adjusting CPU affinity and changing process priority messes up Windows scheduling and may impact other things not evident to users.

If you have determined that MSFS performance is improved by tinkering with the Windows scheduler, this information should be sent to Asobo. MSFS could change certain Registry keys as part of an update or patch making these affinity and priority changes permanent for all users.

I installed it earlier, still have the issues with my 3090

Thank you for the response.
The more data we collect the more likely a faster / accurate fix.

I mainly fly small GA aircraft and have been flying on the small islands around St Maarten and i am getting a complete slideshow after take off.

I have just taken a 15 minute flight after applying this “fix” and observed no stutters. Will test more thoroughly next week when I have more time, in the meantime it would be interesting to see if it works for others…

BUT after the update, the sim dropped to 20fps in areas and planes I used to get 35fps or higher (I tested this objectively) and upon further inspection, I was mainthread limited BUT my CPU core was now maxing out at about 75%, GPU dropped to about 30-40%. I made sure I was on windows high performance mode etc etc but still no dice. Have a look, I used to get over 30fps here with this exact aircraft, now 20: 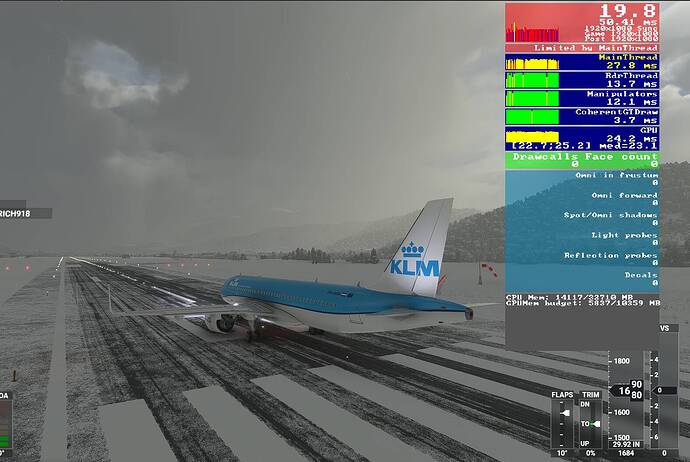 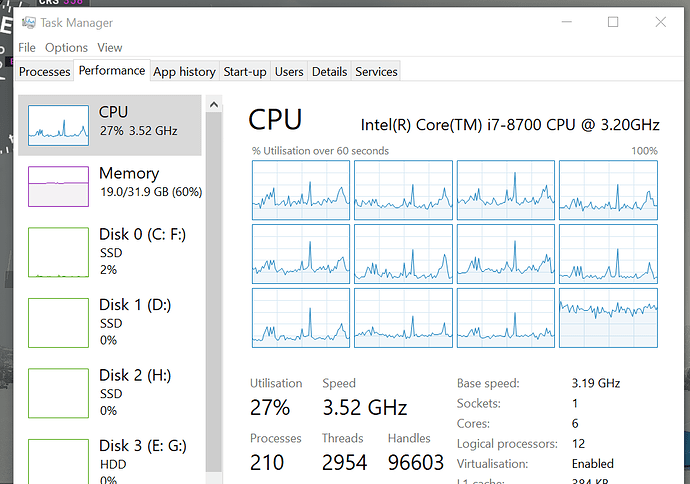 The issue here is the difference between 20 and 30 fps, IMO really makes it a bit annoying and sometimes borderline unplayable

Guys, I struck gold! I managed to solve my issue and got the framerate back up to where it used to be!

Keep in mind that I have no idea how this worked, or if it will work for all of you.

All I did was move all my community folder packages to a different place, start the sim, and set the graphics to the preset ULTRA, applied and saved, and then turned up the settings I wanted to turn up again (such that it was back to the way it was when I experienced low fps) and hey presto! Back to 35fps. I even moved all my community folder stuff back to where they were, and still no drop in fps! Running at >30 fps no problem, and its maxing out (100%) my CPU core AND GPU!

So it wasn’t a problem with community stuff… I think re-applying the graphics settings is what fixed it.

Again, this only worked for me and I have no idea why. Try it and see…

[edit] I know OP did re-apply his settings, and it still didn’t work… Maybe re-applying after SU3 helped? No idea…

Example of what I am seeing. Flight from KLBB → KSAA, so not a whole lot of scenery to have issues with. Started with FPS in the 50s on takeoff. This was fairly close to the airport, but the time I landed the Nvidia FPS counter was fluxuating between the teens and <10, which is the worst it has been (had to keep AP down to last 100 ft).

Looking at the task manager, this is consistent to what I always see when FPS drops. The last logical processor is always pegged. While not present in the screen shot, also seeing 1-3MB/s bandwidth usage, wonder if flying an area I hadn’t been before is causing it.

Exactly the same problem on my side. CPU usage at around 40% with the last core hitting the limit. Therefore limited by Mainthread. Seems like the CPU isn’t able to devide the workload even to all available cores.

A new thread has recently been created pertaining to the implementation of optional beta versions of the game before the mandatory updates are rolled out. If this interest you then don’t hesitate to cast your vote