Does anyone know if there is a way to “save” your tail number+callsign?
Had a look around briefly but cant see one so far. 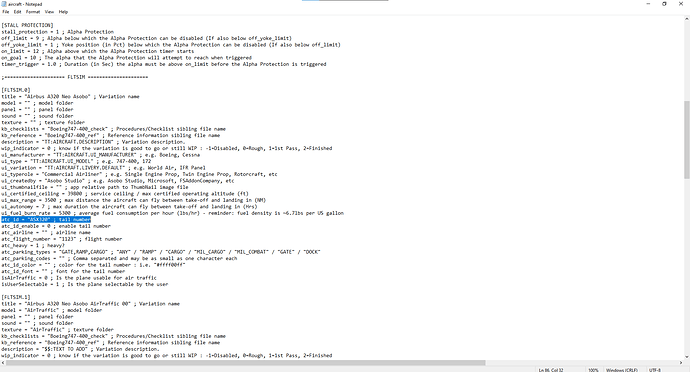 Thanks for that, much appreciated.

oooh nice thank you SuddeN!
Was wondering this myself.

No problem! You can also set a static callsign and flight number with the two lines underneath.

Where is that file on a Win 10 machine

My install is the windows store version so…
wpsystem/s-1-5-21-(long string of numbers again)/Appdata/local/packages/microsoft.flightsimulator_(insert random numbers here)/localcache/packages/official/onestore

What Resyke said above… There is one *.cfg file for each AC

What Resyke said above… There is one *.cfg file for each AC

Exept for the B787-10 … Is it just me or am I missing the aricraft.cfg for that one… The one I want to find

Got it… Thanks for all the info…
Will check it out now at KPNS (Pensacola, FL)

On WIN10
C:\Users"Your User Name"\AppData\Local\Packages\Microsoft.FlightSimulator_8wekyb3d8bbwe\LocalCache\Packages\Official\OneStore\ pick the folder of the airplane you want

Or, depending on where the software has been installed:
G:\FS2020\Official\OneStore\asobo-aircraft-c172sp-as1000\SimObjects\Airplanes

Does not seem to be working for me. I located the .cfg file…made the appropriate change with wordpad and saved the file. Started FS and picked the A/C that I modified the tail number for… no change, tail shows ASXGSA. Went back to main menu in FS. Went back to file location to verify that the file was actually changed. The tail number I applied is, in fact, in the file.

Some of the planes have multiple entries at the bottom of the CFG and all of the tail number entries need to be modified, not just one.

Thank you for that tid bit of info…will take another look at the TBM cfg file.

No problem. I had the same issue as you found, changing every number solved it for me.

Tail number, airline name, and flight number can all be edited. I set mine up like that with my custom skin for the TBP930 as I was fed up of forgetting to do it manually.

For some reason, premium and premium deluxe aircraft don’t have some config files (including aircraft.cfg)…
I already raised a bug report asking to change that.

Well, I changed 3 locations in the TBM930 .cfg file and it still shows ASXGSA.
Maybe I missed one or just maybe I have to go completely out of the FS for the new file to be recognized. We will try that approach.

Well, I am still missing something. There are FOUR (4) places referencing the TBM930 Tail Number and I changed all four and still my tail number shows ASXGSA. Maybe I have something wrong or I put a tail number that it did not like… I used Meridian_Owl that was probably a mistake and the default was used instead…I will make another change with something more logical and see.