Photogrametry is worse than ever

I know about the limitations it has but I think photogrametry has gone to a level that is far from being acceptable and to me it looks even worse than before with the beta because buildings appear to load at even lower detail than before. This is North Hills area, to the north of Van Nuys (KVNY). More precisely 34.24296, -118.49377 (where the iconic truck jump into the channel from Terminator 2 film was shot). This does not look like a house at all. It´s not even close to be a cube with at least the proper textures on the walls or ceiling. What size those textures are? 10kb? And how many polys does the object has? 20? But the whole area, like any other photogrametry areas, still kills performance massively, even when setting terrain viewdistance to 100. How can such a low resolution set of items produce so bad results both in terms of quality and in terms of performance? Are for some reason the buildings not loaded at higher detail due to any bug? All settings are on ultra, except terrain viewdistance (set at 100). Increasing viewdistance does not improve quality.

Fly on any photogrametry area.

This is due to steaming. Check ur rolling cache setting. If it is disappeared, then you have the same bug. Hope the coming update fix it. I have been waiting for it too long. The game is totally unplayable .

I am reasonably sure that it mostly has nothing to do with PG quality as is.

It’s often either a server-side issue (the server you’re connecting to is overloaded or doesn’t provide enough bandwith for you), or it has to do with the internet connection.

That said: I also noticed some areas are better in quality than others. And the greater LA area is not exactly the best but from an altitude of 500ft AGL it looks alright. 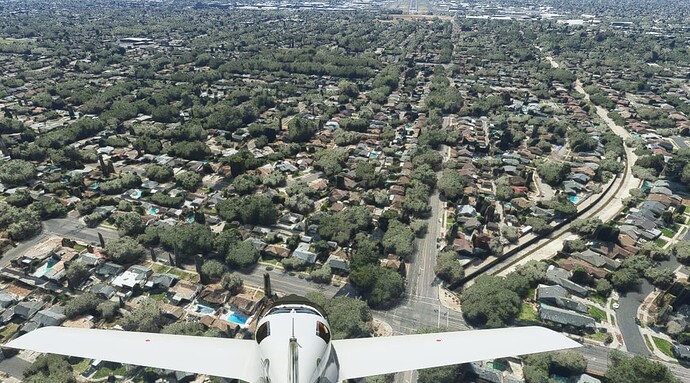 HOWEVER, one also has to take into account that this is a truly VAST area of PG coverage (180miles from Santa Clarita to the Mexican Border and about 120 miles between Redondo Beach and Palm Springs). And with current performance problems it’s a trade-off. If you want high LOD PG for the whole LA area including the valleys and down to San Diego, you’d either have buildings popping in all the time, OR you’d probably get a performance hit that would make flying there almost impossible for anyone without the most high-end system.

Even if it’s hard to accept: technology in MS (or available hardware) does not seem to be ready to give us photorealistic scenery where you can land a helicopter anywhere and it looks like the real world.

Also PG isn’t one of the topics addressed by SU10, so the Beta shouldn’t make any difference in any way, so I don’t see the point of your post.

Yes that´s why I posted here, in case is something could be server side. I know PG is not perfect but I honestly never saw such bad quality before. I fly over Paris some days ago and it was not as good as I remembered prior to beta. My speed is more than enough (1 Gb fiber) and it´s working with high speed and low latency all the time, so I never face issues on my side.

I´m willing to use PG but for some scenarios like helicopter low flying this is not as good as the generic buildings, even if they are not matching the real thing. The problem is that PG also includes some POIs (many important buildings in some cases) and disabling it you face the monolit plague as well, like skyscrappers instead of chimenys. On the other hand PG has monolit trees, trees on the ships, blocky trees/bushes… It´s not really easy to decide what is best.

This is Las Vegas (south of North Las Vegas airport). The difference is quite noticeable at ground level compared to the previous and atrocious example. At least here houses have the shape and the textures of a house. We shouldn´t have so big differences. The results should be more similar as the methodology to build the original objects and render them later on in game is the same.

Hi all, can you please let me know if your photogrammetry quality has improved, worsened, or remained the same after the 1.27.13.0 update on August 4?

Or, photogrammetry quality in general, regardless of geographic area?

Looking at my S Series, I notice a lot of differences in photogrammetry, it seems to work better in the USA than in the rest of the world. My suggestion would be to do a graphical downgrade to make it all more fluid and equal to the rest of the world. I don’t know if this is a server thing or hardware limitation but I would accept a reduction in the realism rate at the expense of a more flexible and dynamic SIM.

Seriously? You are suggesting they reduce quality where its good so it matches what we see elsewhere in the world rather than a graphical upgrade where its needed? I struggle to understand your reasoning quite honestly but you seem to want the sim to go backwards.

That’s right you read. What good is updated satellite imagery if the scenarios are melted in the game? It doesn’t make sense to me. The frame drop is so big and sudden that I sometimes wonder if it’s really worth having them? Will this get better with time? I hope so, but at the moment, honestly, it’s not worth having them in a very shallow way.

Dont assume that because you have performance issues that everybody else does too. I can run PG scenery with a perfectly decent frame rate and I dont get sudden drops in performance. As for the melting buildings, firstly some try to fly far too low, it isn’t designed for that. 1000 feet above the scenery is a more acceptable level. And more generally if there are melting building issues that’s a reason to improve PG, not downgrade it.

As it is, it’s not cool. I waited two years to play this SIM, a console in Brazil doesn’t cost less than two minimum wages, the least I would like for this SIM, it’s a fluid and acceptable performance, I don’t care about exorbitant graphics, nor do I have the hardware for it. Everything you read is a mismatch of performances that are blatant from one user to another. I think I have the right to want a SIM that works even if it costs graphically. I hope you understand and I will end the discussion here.

Yes we all want fluid performance but you want to move the sim in the wrong direction. If there are issues, they should be addressed but downgrading the scenery isnt the way to achieve that. And no offence but if you dont have the hardware to run the sim with higher graphics, turn off PG, you have that option.

Since the latest beta update on the Xbox Series X, I have noticed that many objects from cities only pop up at close range or even houses load slowly. Objects like the TV tower in Muenster, Germany, for example, are displayed as a straight line and are only loaded as a TV tower at a short distance and are recognizable from such a distance.
From far away many details are missing.
So you can’t tell if it’s a chimney or a TV tower.
For VFR flights, however, it is important to recognize whether it is the TV tower, because you can navigate by it.
However, if there is a TV tower and a smokestack in a city, it is difficult to tell exactly what it is.

In general, the photogametry loads very slowly and all houses look very washed out.
This was not the case with the previous beta update.
I am on the internet with a 1GB line and am directly connected to the router via LAN cable. The speed is at full speed, so it can’t be due to my line.

The performance on the other hand is very good, but at the expense of the graphics.

Have you tried setting your settings to low or off. I would guess that would give you the fluidity you want.

Today I experienced two flights with the same aircraft but with different photogrammetry. Using a Virtualcol ERJ190, I flew from Madrid to Bilbao and it was one of the most beautiful flights I’ve ever had, graphically flawless. The second one was from Munich to Milan/Linate and I wanted to leave here two different photos about photogrammetry (those in Italy) and I would like to understand why in some places it works perfectly and in others it leaves something to be desired? Is it hardware limitation? Connection? Server problems or just a poorly polished graphic? I’m in Série S, I live in Brazil and my internet is fast by Brazilian standards.

When I talk about graphic fluidity, that’s what I question. After all, what is missing for everything to be uniform regardless of world updates or not? 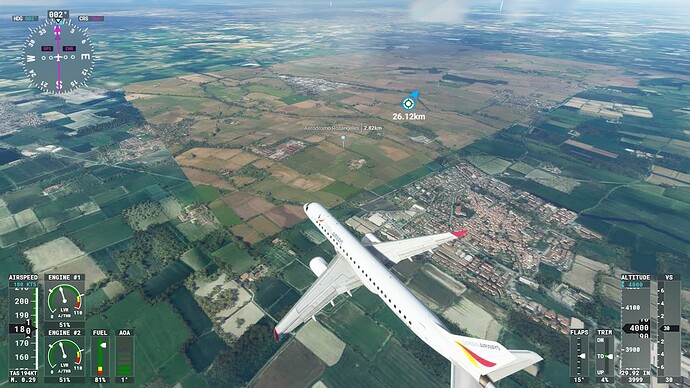 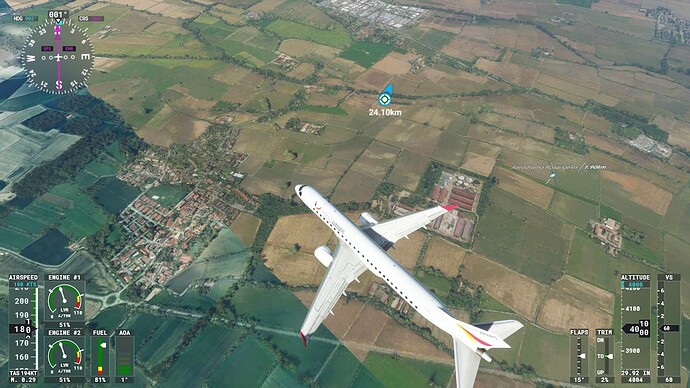 I would say the results are the same. Same coordinates as in original post produce similar aspect as you can see. 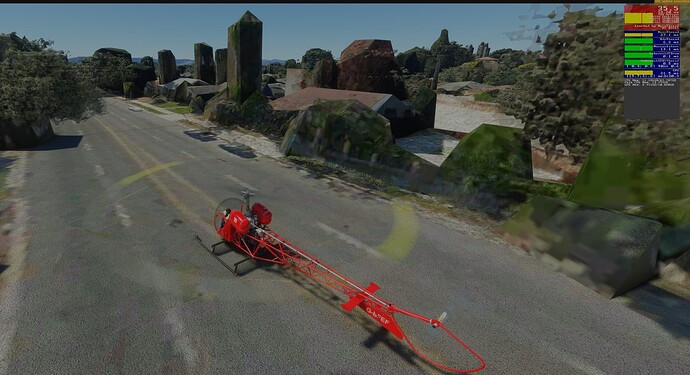 I flew over Italy/Bolognia yesterday and it was pretty bad there. I use terrain lod at 160 and object LOD at 110, but the photogrammy loaded only half of the city despite flying almost over it on the STAR for RW30. Same with Rennes, France. Despite hopping in and out of there frequently and rolling cache enabled at 20GB, it just loads very late and needs to do that every time again I visit.

Not good. Do you have to delete rolling cache after turning Photogrametry on? 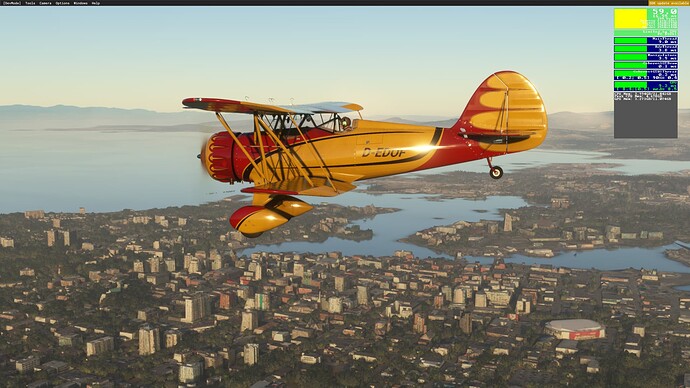