I’ve been using VR since the new year fairly regularly, initially on a Quest 2, and now on a Reverb G2.

I’ve noticed recently, that sometimes when flying the head position (and/or the cockpit itself) shifts a little, usually straight back again, so it feels like a wobble. It seems almost like it could just be a bit of FPS stutter, but it’s not.

It could easily have started coinciding with either a sim, WMR, OpenXR, or even an nVidia driver update … but I don’t know which it would be, as I don’t know exactly when it started, but I would say it started within about the past month, and probably all of those things have seen updates in that time.

Has anyone experienced the same?

It’s not the end of the world, but it is a little uncomfortable when it happens (on average probably roughly once or twice in 5 minutes). I’m just curious if anyone knows what could be causing it and if there’s a potential fix by rolling something back.

This isn’t related to the “camera shake” effect that the sim uses to simulate the movement of the pilot when encountering turbulence, etc.?

Happens to me occasionally too.

I have narrowed it down with some degree of certainty that it’s data dropping off the USB link on the Quest2.

Running the Oculus fixer.exe in the diagnostics directory periodically, seems to eliminate the problem.

I have been experiencing the same thing as well. I was worried it was a tracking issue but it does seem to be related to an update as I have updated drivers, WMR, OpenXR dev tools etc. It is very immersion breaking. I am on an HP Reverb G2 as well.

It would be interesting to see if any other WMR users that are non G2 users experienced it as well so we can rule out the G2 itself.

Ah interesting, so I’m not the only one, and since one of you has this with the Quest2, and the other (like me) with the G2, then it’s got to be either the sim, or potentially GPU drivers.

To answer @willisxdc I don’t think it’s anything intentional. Infact, perhaps a better way to imagine it is almost like a short zoom in/out. I think sometimes the head position (or cockpit) might shift left/right or right slightly, but most of the time it’s as if the cockpit suddenly jumps closer for a frame or 2, then jumps back.

Does the above description describe what you are seeing too @YearlingDeer319 @fulatoro ?

Perfectly describes it. I just downgraded to my trusted 457.30. Have not experienced the issue yet.

I’m on the VP2 and unfortunately it won’t run with old drivers. Says you have to update.

Mine primarily jumps side to side and up and down, rather than in and out. The space key is my friend.

It’s definitely, in my case, a less than perfect USB connection. Without the cable link there is no problem.

It’s happening to me too on a G2. Started in the past few days. Its not just happening in MSFS2020. I have had it occur now in Elite Dangerous Horizons, No Man’s sky, and just in the Steam VR space (not home). It does not seem to occur when I’m in WMR home, however.

I updated my nvidia drivers again to the most recent release (466.63), and did a short-ish flight (around 30 minutes), I didn’t really notice the issue, but that could just be coincidence.

If that’s it though, it would seem to be a nvidia problem … unless anyone’s getting this issue on an AMD GPU?

This used to happen to me all the time with my Reverb G2 and drove me nuts until I discovered that clicking “Clear Environment Data” in the WMR settings fixes the wobbles entirely. Runs like brand new now! 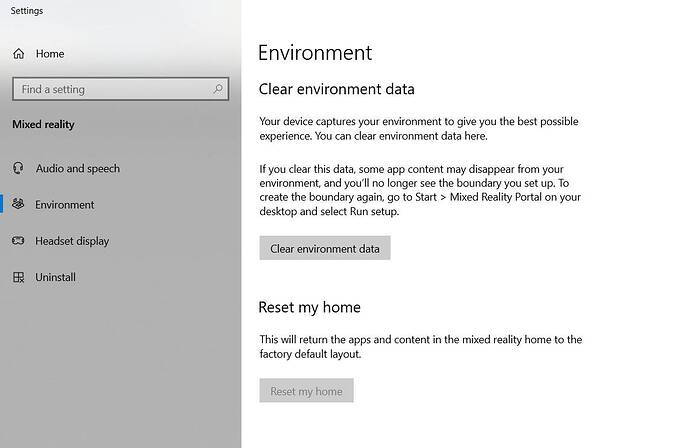 I was aware of this as well but it did not consistently resolve the issue. The only thing that fixed it this time was for me to go back to 457.30. Granted the Clear Environment days did work on multiple occasions with this sim and other sims.

I have experienced this, and wondered if maybe the room is too dark for the tracking sensors on the headset to function properly?

This can be caused by room and room lighting issues and apparently also by driver/computer issues from the posts here. Can’t help with the computer/driver side.

But the room lighting is easy. The tracking cameras need good room lighting to be able to pick out markers to use for tracking. If the room is dim or dark, the cameras will have a harder time. Worse, if your monitor becomes the major source of illumination, you get changing lighting conditions too. Fluorescent lighting can also be an issue.

Best to have good, steady lighting, and things for the tracking cameras to see and fixate on. If I’m not recording video, I switch FS2020 to windowed and make it as small as possible so most of my monitor is fully static and can also be used for tracking. Full-screen displays put moving images in view of the cameras which can confuse the tracking. You don’t want to cover your monitor because of heat buildup, but something in front of the monitor to block the images can also help.