Planes that do tactical flight in the su10

ok, it’s not a subject for the su 10, so that’s when we can talk about it because if the artifacts that still appear whether it’s in directx 11 or 12 which seem to be a super important problem, but planes in tactical flight no, especially in a flight simulator like msfs2020, excuse me but where is the logic. and at the 40th anniversary what are we going to see. I have nothing against Developers must be quite complicated, but at least visual effects like planes should still be taken into account.

Topic moved into Community > General Discussion as this isn’t Beta related nor in the scope of the Beta objective.

I am just not sure what you are trying to point out here.

The user is talking about AI behavior in the pattern above an airport. Instead of following a departure or arrival, it simply buzzes the field at low level. This is a known behavior.

ah… I must have had a “Senior Moment”… seems more frequent lately.
Thanks for the clarification.

flying low scrambles the targeting of sidewinder missiles. They must have a bogey on their six

It´s not only the tactical flying but the airliners capability to travel across mountains. This needs a redesign because now it´s just a joke. I saw an airliner passing over runways at 100 ft yesterday and short after that it disappeared on the mountains…

I returned to p3d less beautiful graphically but at least has the merit of presenting something more realistic, it will be necessary to wait on msfs2020 for the su 3000 000 so that it says ha there are planes which make tactical flight above the airports, more seriously it’s the known 10 they could make an effort, I understand the difficulty of solving the problems on such a simulator, but the minimum is to have something realistic even if there is still defaults. If I want tactical flight I go on DCS it is planned for but MSFS 2020 I ask myself the question (beyond what flies in combat aircraft).

I’m going to assume English is not your first language? Your terminology is confusing me.

I agree, the implementation of AI aircraft in MSFS is extremely poor at the moment. It is on the roadmap, but they haven’t given a lot of details about what they are going to develop and when.

If you’re actually looking for AI military tactical operations, yes, that would be DCS.

yes, sorry for my english, I use google translate, when I talk about tactical flight, it’s the planes that fly at low altitude as in the photo, these are planes that don’t make any approach or departure, I have the impression that 'they should fly at high altitude above the airport but there must be a bug that dates back a very long time but has never been fixed. 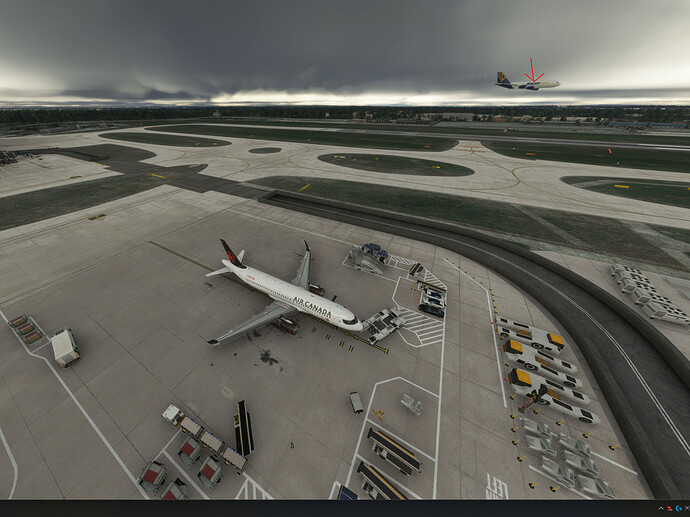 There’s no need to apologize for your English. I just wanted to make sure I understood the terminology translate was creating. And I imagine you are correct there is a bug in play here, or, all aircraft are using small prop plane pattern procedures, or you have live traffic on and it’s a player flying through.

Is that plane just passing through or is it in a landing pattern. If it’s just passing through, yeah, that’s low. In the pattern, well, it depends on if it’s an accurate representation of aircraft or a poor choice of replacement for another player’s plane that you don’t have, and/or they are purposely “violating” the airspace. Did you turn on labels and determine if it’s AI or somebody else?

There are a lot of things that could be going on.

it only passes by and sometimes it’s up to 6 planes at the same time a real joke. it’s an AI plane, I never take live traffic, and I never fly in multiplayer.