Unless the local logbook and profile files that got reset by something in the code then gets synced to the cloud.

Yes just happened to me. I was wondering what was going on? I have 517hrs showing on Steam. So it would be close to that in game. Now my pilot log shows 2hrs after I just got through flying. A lot of my settings went back to default also. Not happy about it. What happened?

No one seems to know

So was this happening due to 3 scenery files being updated ( kdfw / alaska bush / another one ) ???

Was this beta tested ???

I always defended asobo and MSFS … but things are now spinning out of control !!!

Wonder what next weeks world update will cause

Same for me! I don’t understand why some of us have this and others not.

First it started with the ATC not replying with voice, then because I add and remove scenery packages to save on the load time, after i restarted to do my next flight thats when i got the full effect.

ATC voice not working, graphics quality severely hampered by lack of photogrammetry, one thing i am finding though is better processor performance without the Online AI Traffic and Multiplayer not working.

I’ve tried everything suggested by everyone even support via email nothing is working ! I’ve not been able to use my sim since Friday ! This is so disheartening! Every time there’s an update something goes wrong

I opened a ticket with that info. I’m not in front of it now though. User tag Weeezel5

It seems we might have had an update, from 1.14.5. to 1.14.6, which was pushed through while we were flying, rather than on start-up then waiting for us to say yes/no.

This then made the sim/game installer realise that there were three files which needed updating (an airport or two and a bush flight I think?). The installer then forced people to quit mid-flight, and to re-login to their Xbox account, that seems to have caused a loss of flying hours. (this was accompanied by the old “Press a key to start” screen).

The files for updating were not required files, released through the Profile->Content Manager and so should not have needed installing, as they are an optional install.

this update was long ago

I already was on 1.14.6 for a few weeks … like a million other users … so that has nothing to do with it

does anyone found a solution that MS-Store users can backup here files from time to time ?

For Steam Users it’s ‘easy’, but MS-Store I not sure.

The same happened to me. Steam version. 300 hours gone.

I’ve still got logbook hours showing but I’ve lost all ATC sound. No servers available so no Marketplace, live weather or multiplay. Getting sick of the problems updating causes.

There are two possibilities:
…\MSFS 2020\Official\OneStore\fs-base-ui-pages\html_ui\Pages\Profile
(which includes a “logbook” directory)
and the recommended “wgs”
…\Users\NAME\AppData\Local\Packages\Microsoft.FlightSimulator_8wekyb3d8bbwe\SystemAppData\wgs

But who knows for sure, there is also another with “settings” in it …
…\Users\NAME\AppData\Local\Packages\Microsoft.FlightSimulator_8wekyb3d8bbwe\Settings

I have backed up all three, and any other ones I find or are suggested!!

thanks… then my former “guess” about the “wgs” folder seems correct.

May be all users which read here can before starting the app these days, made a backup

It was your “wgs” reference I was quoting lol, I do not know if it is right or wrong, but better to be safe than sorry !!
We would be best off knowing what that Steam backup holds, then we can see where they are kept ;¬)

We would be best off knowing what that Steam backup holds, 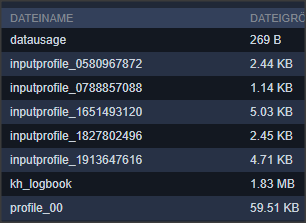 That’s why these games are called “Early Access Games” on Steam.
Oh, wait…