Note to the glacial ones [Asobo].
Well, it’s now day 6 and …Tick-tock, tick-tock.
But wait a minute, what’s this? …tumbleweed.

Seems the problem “packages-out-of-date” warning is happening for al users. Steam users can restore their playtime, logbook and profile if they have a local computer backup. I did this successfully and described the procedure in my message in this thread some 5 hours ago. I don’t know if Microsoft store users can do a similar procedure, or if unfortunately their logbook and profile are existing only in de Xbox cloud. In that case MS/Asobo can hopefully solve it at same time with the 'packages-out-of-date" warning.

Seems the problem “packages-out-of-date” warning is happening for al users.

Not for all as I have not had it…yet. A subset of users certainly, but I’ve not seen enough information in users posts to offer any possible reason. Going back over the thread it reads like both MS Store, and Steam users are equally affected:

Additional information may be useful:

Country of origin
Not sure if users under NDA are even allowed to say whether they are involved in the WU4 beta or not.

Guy’s, you think that with the World Update 4 the playing time & logbook etc. gonna be fixed?

I don’t think anyone outside of MS/Asobo can do anything other than hope that is the case. My hope is that this is somehow related to the beta, and there is some leakage between beta/non-beta infrastructure.

If you wanted to play it safe you could leave MSFS aside until the new update is released.

You’re right, I didn’t mean everyone, some, but it seems a problem that can occur for both types of users (Steam/Store)

Yea I meant that everyone has the opportunity to be affected. I’ve gotten the message 5 times and I’ve probably dealt with it in every way possible including hitting no, hitting yes, immediate restart, ect. I haven’t lost my logs though. So whatever is happening is completely random and is affecting everyone who had encountered the message differently. I believe everyone had equal opportunity to be affected though. There’s nothing ones self could do to avoid becoming afflicted with this new bug.

Simply switching to offline mode and back triggers it. Does it not for you? Beta testers might be unaffected.

I’ve had this several times now. Must be something spooky going on because even the press any kay to start splash screen is back and they removed that! I do hope they can just read off the achievements and replace parts of the logbook.

Well… That’s a way to discover that this game that costs as much as two AAA games doesn’t have cloud save.

Simply switching to offline mode and back triggers it.

Ah, that’s something new I think. Do you mean you turned off all online features like Azure TTS, photogrammetry etc.

Must be something spooky going on because even the press any kay to start splash screen is back and they removed that!

The only time I have seen that recently is when the XBox Live network was having issues. It logged me out of their network, and sent me back to that screen.

Asobo may get a law sue, if they can’t restore our pilot profile. I don’t think everyone here would want to log the profile from 0 hours, as we have spent lots of time and energy into it.

Really? It is a loss, yes, and I feel for all our fellow airmen and airwomen who lost their hours. But we need to stay realistic here. The loss of virtual flying hours will most definitely not be an object for litigation. You can be sure of that. I understand that ppl need to vent their anger and disappointment but that overshoots the goal by any measure.

EDIT
I just received an update via the store of 1.23 GB - maybe that’s the remedy we’ve been waiting for?

I experienced this error (pictured below) while descending on a flight from Birmingham, UK (EGBB) to Rome-Ciampino, Italy (LIRA) in the A320 (FlyByWire Development Version) on Sunday (approx 17:45z real-world time).

I have the server set to Automatic (that usually puts me on to North Europe, so believe it would have been this server at the time - it could have been West Europe, but North is usually the one it selects).

My internet appeared to have a minor outage at the time so my connection may have been intermittent, so I thought this might have been what triggered it.

However, I have been experiencing quite a lot of strange behaviour since. 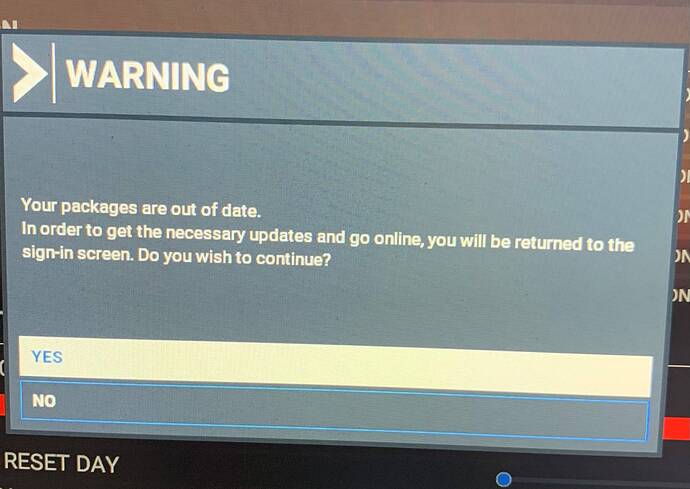 I initially selected ‘NO’ on the message, as I wanted to finish my flight first.

Immediately after pressing ‘NO’ all my ‘DATA CONNECTION’ options in the Data settings (Online Functionality, Bing Data World Graphics etc.) all reverted to ‘OFF’.

Turning them back on resulted in the same ‘pop-up’ appearing.

I clicked ‘NO’ on the pop-up again and finished my flight, then went to the Content Manager to see if any packages needed updating as the error message suggested, but all my packages were already up to date.

I then went back to the Settings to try to turn Online Functionality etc. back on to trigger the pop-up to appear again, and this time clicked ‘YES’.

After about a 20-30 second freeze, the game eventually took me to the ‘Press Any Key’ screen.

SETTINGS
After logging back in, most of my settings remained, though some had changed (notably the ‘MAIN COLOR’ option in the Accessibility menu had been changed from Protanopia to Default). Most settings in the ‘ASSISTANCE’ menu seemed to have been changed back to default, too (I changed it back to Protanopia and it’s remained on this since without issue).

LOGBOOK
My log book appears to have been completely reset and it looks like I am now building up my hours from zero again (I really hope this can be fixed from your end!) though all my ‘achievements’ in my Pilot Profile remain in tact.

IN-FLIGHT AI/CHECKLIST & ATC PROBLEMS
I went to try another flight and noticed that the pilot’s ATC voice had changed (I have ‘Azure’ selected, but it sounds like it’s the ‘Windows Offline’ voice for the pilot. Weirdly, I’m convinced the air traffic controller’s voice is still the ‘Azure’ voice, so I now have a hybrid of both, even though Azure is selected). Sometimes, the voices now appear to conflict and talk over each other. I have been unable to resolve this ‘hybrid ATC’ issue since.

I then noticed that the ‘AUTO COMPLETE CHECKLIST’ option had vanished from the Checklist in-flight, even though it was turned on in the main ASSISTANCE menu and in the AI CO-PILOT menu (this issue has since resolved itself).

After taking off, everything was fine (apart from the AI CO-PILOT not responding to ATC at first despite being switched on, though it suddenly started working after take-off).

All was fine, until I reaslied, about five minutes before landing, that ATC had not communicated at all to me to tell me to begin descending. ATC appeared to be frozen (all options on the ATC menu were greyed out), so I completed my approach without ATC, which suddenly unfroze and started working normally once I was off the runway and needed to taxi to the gate (albeit the AI CO-PILOT at first tried started speaking to an ATC Centre we’d left behind several hundred miles beforehand - think it might have been Paris or Brussels, so I’d have been about 300-400 miles west at that point!)

I did another flight and, again, ATC was fine until it seemed to go completely missing during the approach.

CTD
The flight after that was fine, although I did get a crash to desktop (which for me is very rare) soon after arrival, just after I’d left the runway to taxi to the gate - this was just as I was being handed over to ATC ground, so I wondered if it was related to the ATC issue.

That’s as far as I’ve gotten now - I’m just going back in to do another flight, so I’ll keep you posted if anything else happens.

Regardless, whatever has happened on Sunday, it looks like it’s also caused a number of additional issues that I’ve never encountered before. It’s made me wonder whether my Xbox live account has some sort of corruption (perhaps there’s someone who could take a look - hopefully there’s some connection data there that might be helpful?)

Hope this is all helpful to you.

I’ve just confirmed that most of the reviews on the marketplace were reset to zero. It seems the servers have lost some of their data as well. 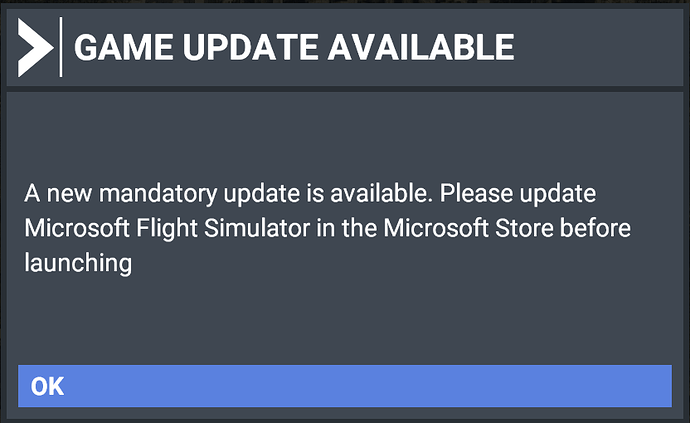 Downloading it now on Steam…shhh dont tell nobody they’ll screw up the bandwidth.

Move along nothing to see here…

Wait what would the next version be … its saying 1.14.6.0 arent we already on that version…What gives here…