Good grief, I thought this was fixed. Flying over Paris looks awful! 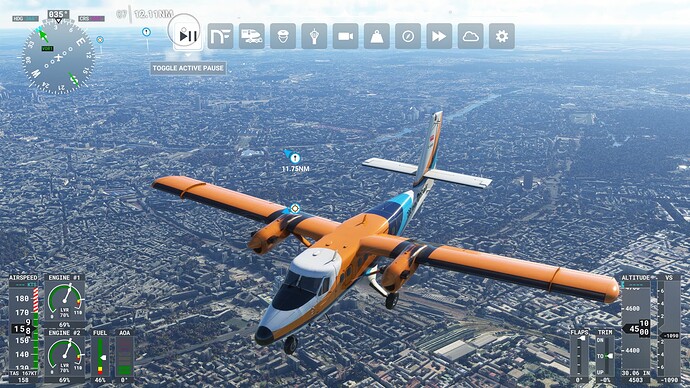 Blimey I hope so, ive got a 70mb connection and its the middle of the day in the UK.

I’m way more interested in them fixing the performance of it than the look of it. Over Los Angeless it kills frame rate even on a nicely tuned system with 400Mb/s connection. Turn it off and frame rates are stable and fine, turn it on and you’re in the teens or low 20’s with stutters.

I’d far rather have a stable scene with autogen than an unpredictable mess with photogram any day.

Yes, I’ve found most of the large European cities with PG seem to be the worst, and I get tired of looking at melting buildings that never really render even with a fast Internet connection (maybe it’s the servers?). I’ve found smaller/medium cities with PG look better. For example, I think the PG in San Francisco (where I live) is descent.

That said, I fly around Paris all the time and did find the Orbx Paris scenery pack to greatly improve many of the buildings which are handcrafted. Much more so than the default Paris even with the World Update. Huddison (youtuber) just did a recent comparison of London Orbx pack with default showing how it greatly improves that city as well. Although in both cases the handcrafted buildings are still surround by melting buildings. Shame we have to buy these scenery packs to improve cities that were already “improved” in World Updates.

Yep that was what I was testing out Wasabi, I just installed the Orbx Paris pack.

Yes even with LOD 400 I still get those ugly PG buildings.
As others have mentioned location plays a big factor.
USA IMO has the best quality PG.
If flying in USA PG On
If flying outside USA PG OFF

I don’t think Australia PG are too bad, Europe/UK are the worst ones

The same problem also in switzerland, and here normaly, we have a perfect mesh

I’ve been told Jen has borrowed the internet to display at a board meeting so there may be some delays.

Guys, I think there is some misunderstanding of what photogrammetry can do. PG is always going to look melty up close, that is a limitation of the tech, not the sim.

You’re literally rebuilding a 3d scene from a photo, and if you’re lucky from some satellite radar altimetry. The data is rough. It quite simply is never going to be otherwise. Buildings will look ok, on the side photographed, and wonky on the other side because that is the computer guessing. Roofs will be weird, etc.

If you want tidy straight buildings, you’re either going to have to hand build your own scenery area, or just use autogen. Photogrammetry can’t do it.

So again, its not the look that everyone should be upset about, its the horrid performance. The look is what the look is based on the available data, its a flight simulator, not a magic wand.

—edit— someone will show up and show a perfect photogrammetry object as an example – Yeah, you can apply the tech deliberately to a single object and get a great result, but thats not what the sim is doing and its not reasonable. MS can’t hand scan every building in the world. So they have to go with larger scale lower resolution data.

I agree with your post. However, it would have been technically possible to “do better”. The way the product was marketed, they really hyped up how it leverages Azure and AI. In reality, I am not really seeing that.

They could have designed it such that the first pass through a location you get that melted/bombed out look. But as time goes by, AI jobs run to make multiple runs, and parsing from the geo satellite information, and other data sources, and basically "deep fake"ing it.

Absolutely, that couldn’t be don in real time. But it could have been done such the Azure back end continues to flesh out the detail.

In my view, it is a big opportunity that was really missed, and that surprises me given how Azure/AI were touted during pre-release hype.

I’ve been having the same problem ever since sim update 8. Most of my photographic buildings and ground textures are completely messed up. I’m also getting low bandwidth messages, and it keeps kicking me to offline mode for some reason. I verified my internet my is fine, I’ve got a 1.2 GB down connection.

it would have been technically possible to “do better”.

I think you’d have to back that up somehow other than just asserting that its possible.

Now, if you know your remark to be true, could you link to something that describes how? Some other company that has done it (meaning at a large scale and not just a single neighborhood, or something like that).

To be clear, I’m not trying to say you’re wrong, I’m just saying that what you’re describing is not something I’ve ever seen or heard of and if it exists I’d genuinely like to see it.

Plenty of third party developers are producing Photogrammetry of good quality and without morphing, all for free on flightsim.to. The Dutch seem particularly good at it

granted its on a smaller scale

But I think thats really the key. If you’re working with a smaller area you can go in and either adjust the logic, or hand tweak it into shape. When you’re trying to do it with a single catch all logic for the whole world (or at least the areas where the data allows the attempt), then its never going to be any better than the data it is generated from.

Well I wasn’t THAT low in my screenshot!

No, you’re not low, I agree. And I agree they over promised prior to release, and that is a big part of why people are frustrated. But, in their defense, nobody had really ever attempted what they were doing at such a large scale, so they did have some justification for being very proud of what they did. But they let the expectations get bigger than what they could deliver, that was definitely a mistake.

Just the same, forgetting what people believe it ‘should’ look like, and comparing it with the original out of the box of any other simulator, its a huge step up, so beating 'em up on the finer points gets a little old. (my opinion). I still don’t see any other dev really doing better (again, keeping the scale in mind).

3rd parties aren’t trying to cover anywhere near as much ground as MS/Asobo was, so yes, some of them have beat it in small scale.

Part of the problem is the LOD. It loads in if you give it time but the distance is poor as it starts to load out as you move away. Problem is its when you are still quite close that it does this.

Unfortunaly i got the sam issue in a few citys. I think its a server related issue.

Yeah, I think thats actually the server being slow and not the LOD, and that is part of what I’m talking about when I say the performance is a problem.