Ok, so I loaded up central Paris about 1km north of the Louvre at 1700ish feet… and this first image is that. All the ugly here is that the local architecture is beyond the resolution of the PG mesh, its just because its complex.

Its not as good as I’d like, but its as good as I’d expect and again, I’d like to see a screenshot from a game that does it better using the same methods at the same scale. 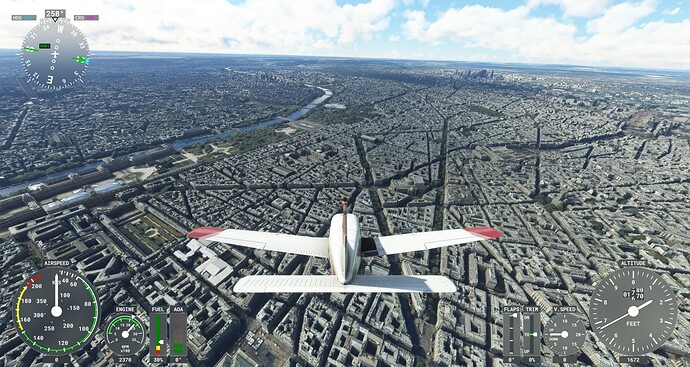 I then used SLEW do go straight up about 1000 feet to 2700ish feet and below is that view. 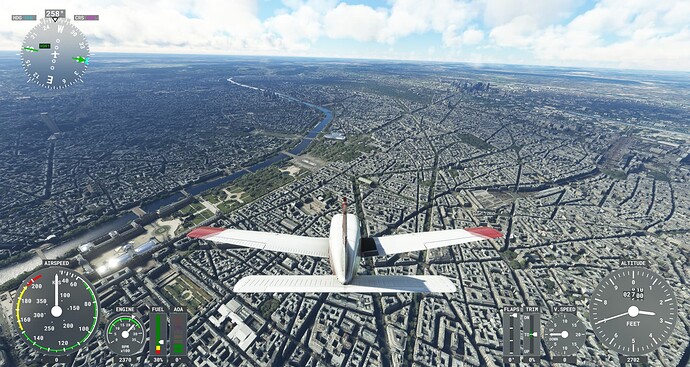 I think buildings that are hand built (like the Louvre) are skewing peoples idea of what the photogrammetry should look like. And again, if anyone has a game with better large scale photogrammetry I’d love to see it.

Sorry, I really think this is a case of unrealistic expectations cast against a $60 video game that honestly punches way above its price tag despite its MANY and obvious flaws.

(the orginals are 4k, sorry, the forum software did the reduction) If anyone can tell me how to share the full sized images I will.

That is similar to what I saw on PC and not the hot mess I saw earlier on XBOX.

Yeah, I think there could be a “your computer is a potato” component to some of this. Maybe Xbox is a potato, I don’t know, I never owned one so I don’t know where they land vs PC.

Worthy of note, lots of people buy computers that aren’t potatoes on paper, but are potatoes due to bloatware from names that rhyme with ‘smell’ or ‘stralienware’, etc… Never underestimate the ability of slick marketing to turn what should be a fast computer into a steaming pile of… unpleasant pit toilet contents.

What I was seeing in these towns on XBOX was not a potato issue, in fact, my computer is the potato. And it looks fine.

But I do suspect it was a server thing and I was getting incomplete data. Alas the TV that runs the XBOX is in use so I cannot try and replicate right now. Kicking myself for not getting screen caps when I had it running earlier.

If I can replicate, I will get pics and share.

But for tonight, I am confined to PC.

Have a good one, and thanks for testing this!

I found out it’s not just a network problem.
Bing maps in several European cities isn’t as great compared with the North American maps.
After flying over a terrible rendered London, I got a very great experience flying over Pittsburgh.
So, when it’s just network problem,because Pittsburgh looks great.

Haven’t tried it since my original post, last thing I tried, I installed a mod version from google photogrammetry by a creator on flightsim.to. it was 10gb and it wasn’t great either so removed it.

I get it - Paris is complex but the issue is the streaming, as you said it’s not bringing in the data correctly.

I know Vigo is smaller but boy that looked beautiful when I went for a spin. There’s deffo something up.

Yes and no. The colours in real life are much more saturated than what we get from PG in the game. I am quite convinced that the drab colours do a lot to harm the overall impression that we get from PG. Melted buildings can look sort of OK at height if colours look real and this is what happens in places like Rome and its why the overall impression is that these cities look better even when they are not loading that quickly, in my opinion anyway. 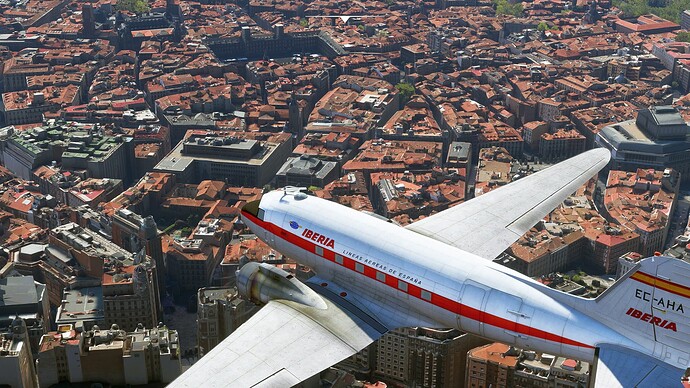 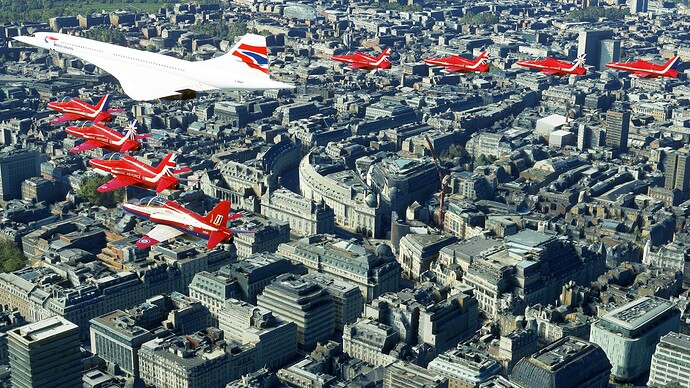 But just look at the uniform dank grey colour of London! Yes geometrically you have achieved a good result but in terms of colour saturation London looks abysmal.

Does the PG still work as good as this?

Very hit and miss. For some yes, for others not…

I do some testing tonight to see where the PG work and where it doesn’t work. When I spawn in Marseilles, France it looks amazing and on point all over the place. In LA, USA it looks garbage. So it does depend on which city I fly in. When I spawn on Burbank, LA and use my drone around the “neighbourhood” the whole game actually freeze and I have to CTRL-ALT-DEL to exit the game.
It must be a bug as I still haven’t seen LA in a good condition with PG on.

Best results i get is to lower object lod to 50 or below while set terrain lod to 400 in photogrammetry area.