If you’re downloading files and putting them into the PMDG-specific folders in your \COMMUNITY folder, you must have them there before you spawn into the plane.

If you follow the instructions in the Introduction PDF and put them into the working directory inside the sim’s installation, then you can download them and load them up into the FMC “live” without restarting the flight. I’ve done it on a multi-leg flight and know it works. 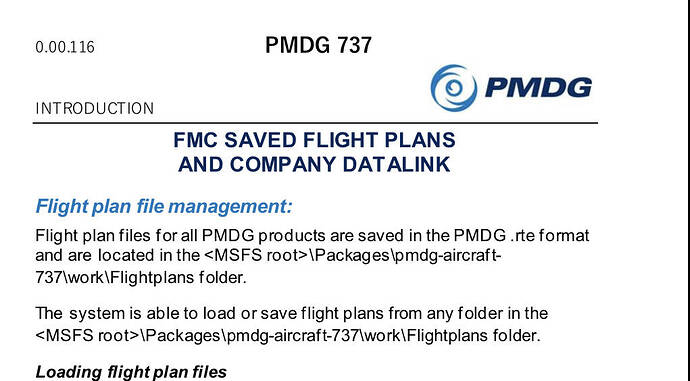 Basically, stuff in those \COMMUNITY folders is copied into the working directories inside the sim folders when the plane is loaded in, but not afterwards. Conversely, the data inside those main sim folders is accessible all the time.

I edit the existing Plan and generate a new one with actual time (there ist an icon for that on simbrief to use the actual time). And than i only Download the weather file .wx again in the weather folder of the 737. After that i just import the Wind Data again. Works great. And you see the windspeed and direction just changing when imported.
I am not on my PC right now so i cant see the right folder name and location in the FMS. But i remember its on the LEG Page the bottom right button where you can import Wind Data.

Ah, I see. I just selected the “wrong” folder.
Well, thats a gamechanger, at least for me

As far as I know the update has not been released yet. (expected sometime this week)

Once it does you would update through the PMDG Control Center.

Is this the latest version? 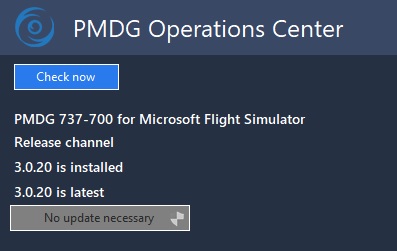 Still getting up to speed on this sim. Does anyone know if the VNAV is a bit “wonky”. It seems that if I wait until TOD to descend, I’m in “space shuttle landing mode”, rocketing down at a very high rate of descent with the spoilers deployed for most of the time to keep from over-speeding. What I’m now doing is using VS to start the descent well before TOD.

Also, I flew an ILS into KBOS last night. Had acquired this GS (single channel), was properly configured and on-speed, yet the autopilot consistently flew high (4 white lights on the visual reference thingy by side of runway). Any thoughts on this?

For me, VNAV is working well in most cases. If you have moderate/strong tailwinds, you might get DRAG REQUIRED messages on the FMC but once your speed drops to within a few knots of your target speed it’s fine again. There might be some arrivals and approaches where the existing VNAV isn’t perfect but it’s not usually anything you can’t work around.

As for the ILS - it’s common in the sim where the ILS glideslope won’t give you “two whites, two reds” in the PAPI. So long as your ILS is descending generally in line with the vertical speeds from the runway approach chart, you’re fine. For instance, I made this approach last evening into RWY 2L at KBNA. For my final approach speed of 137 knots (Vref 132 + 5), my descent rate should have been around 720 fpm. 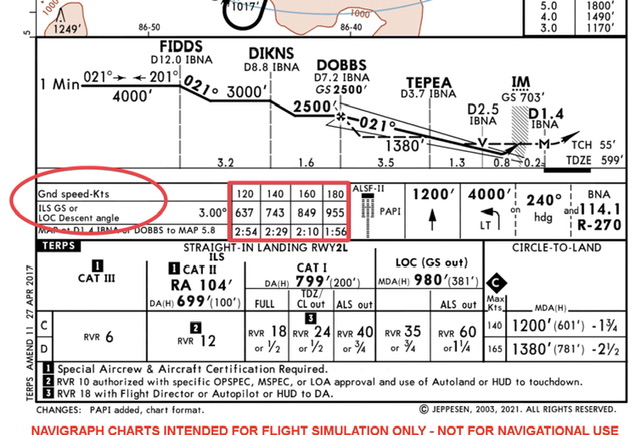 I asked this before but didn’t get an answer.

How do I know if my plane is performing a CAT III ILS landing? The chart gives me different minimums depending on the category but my displays don’t give me any information about which one I’m using. Or is the 737 always using CAT III if available?

I’m still learning the airliners, forgive me for the noob question.

The plane will do CAT III ILS, the pilot is the one who needs to be certificated for it

On the chart itself you need to see that the runway is CAT III (there’s DH below). For example ILS into runway 06 in Amsterdam, the DH is 50’ (RADIO not BARO). Don’t forget to arm both autopilots and it should bring you safely into CAT III ILS landing.

Ah, got it. I thought the category depended on the complexity of the aircraft navigation systems. Been wrong my whole life then, hehe. About time to set the correct minimums.

But which one do I choose when there are different ils cat to choose from (and not doing an autoland)? Depending on wheather/ visibility?

Of course it depends on the quality of the ground systems as well. This is a difficult thing to explain in some lines on a forum reply.

CATII or CATIII operations are meteorological and state conditions of the airfield. When meteorological conditions dictate, the airdrome will activate LVP which involves, among other things, holding points further away from the runway and limited taxi operations.

What matters to you as a pilot, and what probably you’re asking about is the “autoland”. For an autoland in the 737 you need to use both autopilots for the approach. That way the autopilots will fly the airplane all the way to main gear touchdown. On touchdown you will disconnect the autopilots and maintain rwy center line. By looking at the FMA, you’ll see the white word “flare” (and maybe “rollout” depending on the FAIL PASSIVE or FAIL OPERATIONAL). That way you’ll know you’re conducting a dual channel approach with autoland.

We practice autolands frequently even outside of CATII or III met conditions. We can even practice autolands on airports without LVPs or CATIII runways. Remember CAT is about the minimums you can use for the approach, not just about the fact of whether you can or can’t conduct an autoland.

On a standard day with CATI weather you will select BARO minimums as per the ILS procedure. If the weather conditions are below CATI the airport will enforce LVPs and reflect it on the ATIS. They will limit taxi operations and activate the CATIII holding positions. These are further away from the runway to prevent interference. If LVPs are enforced and the runway has a CATII or III procedure, then you can use RADIO minimums (50ftRA for CATIIIA and 100ftRA for CATII).

RA minimums are not a fixed value, you need to crosscheck with the app plate.

CATIIIA minimum is always 50 feet radio but CATII may vary.

Regarding the landing, I was at ~ 500’ coming over the threshold. Still on autopilot. I’ll try a flight to a different airport and see if the issue repeats. Thanks for the info on rate of descents, I’m embarrassed to admit that I never paid attention to that data before. That will be quite helpful.

Thanks for the info. If I could ask a question or two - are your jets equipped with the HGS? If so, do you use them throughout the flight, just for landing or just in inclement weather? Is it the pilot’s decision or airline SOP that dictates the usage? Thanks again for taking the time to educate us noobs.