I’m still waiting for CTD with PMDG 737 and I fly it almost every day.

Interesting. I’ve had a lot of those connection problems recently too. Maybe 5-10 disconnects/reconnects per flight. I have had them before, but they never cause a ctd.
It was unusual getting one rigth on landing. Just hit the spoilers deploy after touching down and dispaly stutters and FS crashes with some ‘exception’ code error. 4 hr flight lost. This was into PANC (payware) but I’ve flown in loads there over last week before this patch. There have been loads of aircraft being patched recently, and I’ve added in some scenery (nowhere near AK eg ORBX Iceland mesh), which shouldn’t be an issue in there, but I may try uninstalling it just in case.

One thing I’ve really noticed is a very fast climb out.
I set V2+15kt in the MCP and I find myself often with 20° pitch - even with CLB-2 selected.

I know the 700 is a rocket, but what should I be doing, since this seems a bit, well, much.

Why are you selecting V2+15? And CLB-2 should also not be selected in the early stage of take off. In the 1st to 4th segments of take off you should be on TO thrust (or TO-1 or 2). At that point you should just follow flight director after gear up and limit yourself to 20. On a light airplane, the FD will command more than 20ºNUP. Ignore it. Keep 20º as your manual flight maximum. Then when the autopilot is on it will fly higher pitches if it needs to. CLB, CLB-1 or CLB-2 will be set after the thrust reduction height (N1 indication on the FMA) and at that point on an NADP2 (which you’re probably flying) the airplane will already be accelerating to the UP speed with a far lower nose up attitude.

For takeoff set V2 on MCP. The FD will command V2+15 for you. Reduced climb thrust (CLB1 and 2) come in effect once N1 (green FMA annunciation) is active. If you struggle to keep speed before chances are your thrust reduction (ASSTEMP and/or DERATE) for takeoff is not sufficient or your rotation is slow.

Also in whatever tool you’re using for T/O performance calculations check if you are getting normal or improved climb speeds. With the latter you have a good chance to see higher pitch values initially.

Sorry, I didn’t explain my question clearly. What altitude do you set in the box to transition from TO to CLB thrust?

In my current company all airplanes have the automatic thrust reduction at 1500ft and we never change it. For some time, during a wrong software update, the airplanes defaulted to 800ft and we had a memo to manually change it to 1500ft during preflight until it was corrected.

As soon as we get the flaps up, if we’re given continuous climb above FL150 we’ll select full climb thrust in the N1 LIMIT page by deleting CLB-1 or CLB-2 (in case we had any climb derates). That often happens as soon as the flaps are up.

I haven’t noticed an increase in CTDs here. I run a fairly vanilla sim but I do include Simple Traffic and some Orbx and other payware scenery. So far so good…hope you can sort your issue out.

Since I got rid of tons of freeware sceneries and kept only few very good ones (Gatwick, Kuwait, Oslo), payware airports and airplanes, I experience very occasional CTD’s.

Well, I had three wonderful short flights this afternoon without any problems (KBUR - KLAS; KLAS - KBUR; KATL - KBNA) and then after almost 90 minutes out of KBUR, just as I was descending through 1,000’ on the ILS for RWY 28L at KSFO, I had a freeze and then about 20 seconds later a CTD.

I realized after the flight that I had a number of SF Bay-area freeware mods installed: some freeware bridges around the area, and two “water fix” mods that correct the shoreline regions around the Bay (submerged marinas and beaches, etc). I also had a freeware helicopter pad mod installed for Alcatraz Island. In light of the new terrain geometry updates in World Update X, any one of these mods might have been the cause of the problem. I have disabled them all but it’s too late this evening here to refly that flight and see. Definitely going to do it tomorrow after work, however.

But if you’ve read all that, you deserve some eye-candy. Here’s the end of my earlier KLAS - KBUR leg. The Orbx Burbank scenery is great, and it was on sale this weekend. 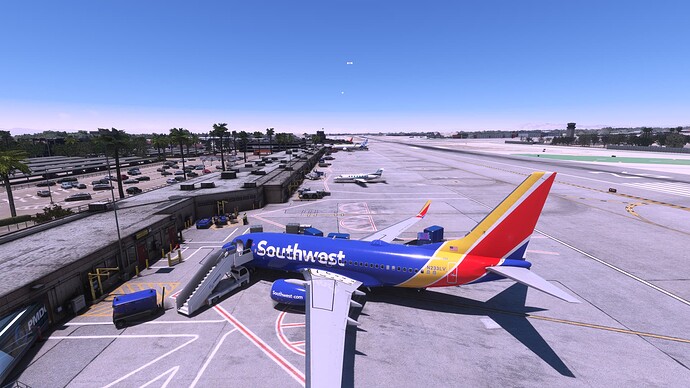 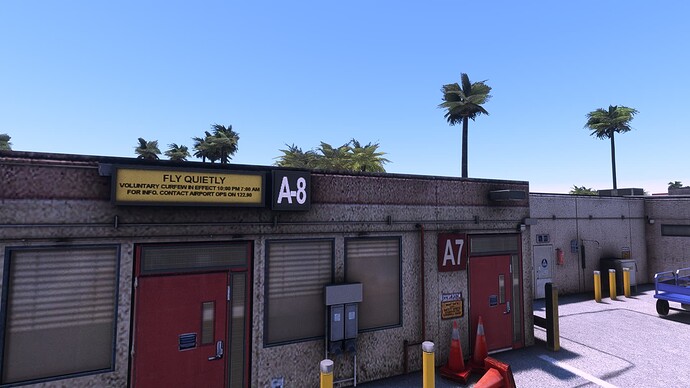 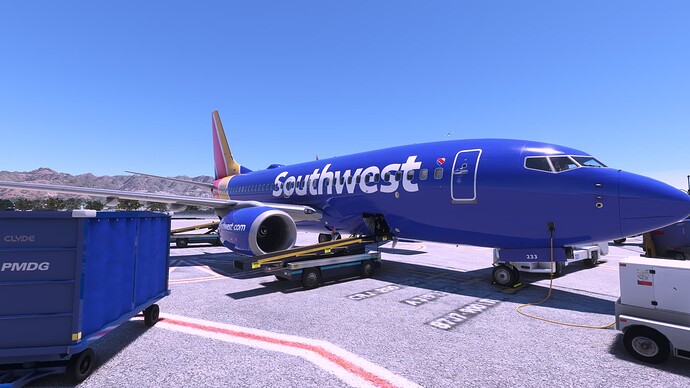 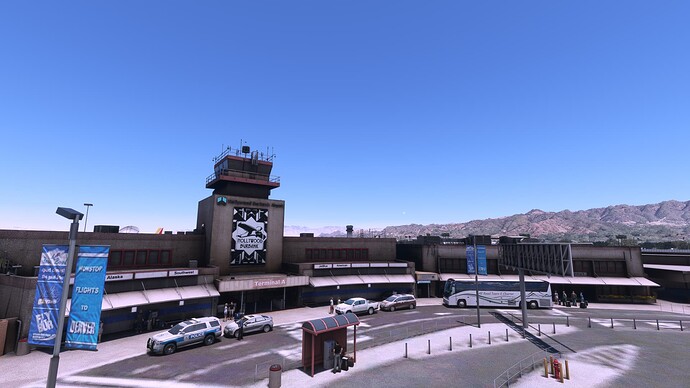 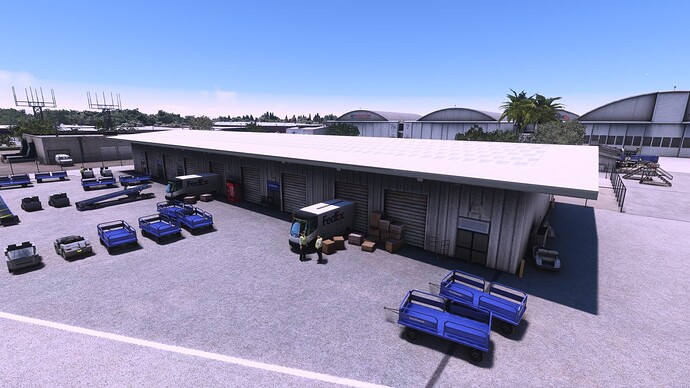 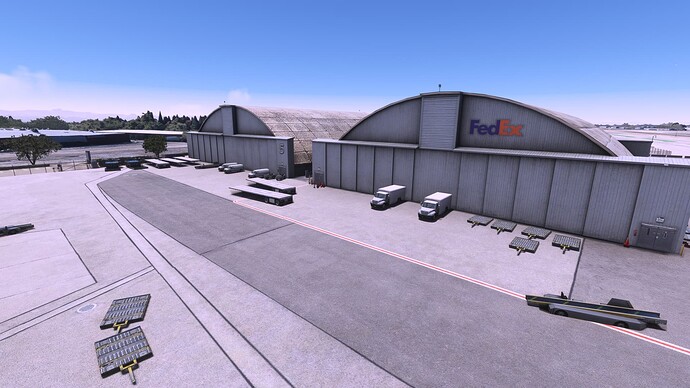 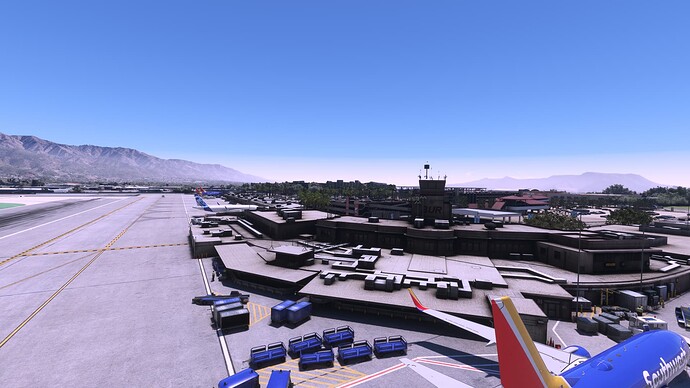 I just discovered the need to install an addon navigraph package for the pmdg 737. I could find no such information in the documentation suppied with this aircraft. Why???

You don’t have to. The 737 comes with navdata. However, if you want the latest data then your are correct, you need navigraph. Not sure which AIRAC cycle comes with the plane.

The reason is that PMDG can’t use the sim data. That’s pretty common for add-on airliners, same for the CRJ, Fenix and I believe the Maddog as well.

I have been using navidata in MSFS all along but I was surprisrd that there are now additional packages for thd PMDG 747 and one other aircraft that also must be installed. I began to suspect some kind of database issue while trying to folllow a route entry in the PMDG 747 tutoral. The CDU would just not accept accept a certian waypoint.
Now that I have installed the navidata PMD 747 package I do hope that problem is resolved. But if so why does PMDG write a tutorial that requires an updated special data base without even mentioning it anywhere iin their docs.
They describe pages of config options but I have not found a desription of the APU and engine start procedure in their docs.

This!!! This is why we… MFS forum mods must create a learning section within this third-party section only edited by giys like you, and in SOP order, from cold dark through to ‘turnaround/shutdown’ with real questions and answers (to get that context without asking the same question the 1000th time… see/look for the 2001st post for the same question and answer) lets create this and, for experts… togo through each of their respected aircraft and copy and paste these incredibly insightful and very important information. Doing so… it will help gonso far in growing the community, which I feel is important for both MSFS and the developers alike…

very nice information. Curious, is there a reason 99% of the time landings are done manually?
With so much technology “working” for you i thought it was just a matter of choice.
I´m totally an amateur here, just curious.

Also you mentioned something very nice, that a LOT of people here tend to say that you have “nothing” to do on airplanes like this using auto throttle while on cruise etc… thats why they find more fun to fly old planes like the Bae 146.

Another curiosity: Is there a reason why professional pilots turn of the auto throttle to fly manually? It´s not much more time consuming during a long flight for example?

I use auto throttle all the time and usually land manually when im really about to land, but most of the time i find it very fun to autoland, its just amazing how everything works flawlessly.

I really want to start to land manually and shut off the auto throttle after reading your post.
Only thing i usually do is manually change the speed when i see that there is room to go faster.

Sorry if im asking stupid questions, just someone who have been flying for only 2 years on MSFS
and thanks for sharing some very nice information with us.

they should focus on releasing an EFB! thats something that enhance the experience for me.
and i think should have been released on day 1.

I invite you to come over to the PMDG forum. There you’ll find at least 10 real life 737 pilots who are very involved with the forum.

Landing manually is a no brainer and it doesn’t really create a sense of effort that we’d rather avoid by landing automatically. It’s like having a car that parks automatically. You know it can do it but you still park it manually because why not, what’s the big deal… But there are more reasons than these of course.

We follow SOPs. We only autoland when the weather conditions require us to do so and the airport and facilities are approved for automatic landings in below CAT I conditions. We also practice simulated CATIII conditions, where we will autoland even if the weather is CATI or above. Not every runway has a good enough localizer to conduct autolands. In those runways we only do them to practice and we’re ready to go around if things go wrong (as always). Doing a practice autoland to a runway that is not prepared for CATII or III operations is somwhat stressful, as you don’t know if anything getting close to the runway will distort the localizer and cause the airplane to “sew” the localizer. These objects can be a car driving along the road right before the threshold or an airplane holding for departure in a position far closer than they’d be using in an airport where Low Vis procedures were enforced. So yeah, it’s not so simple.

On anything but the initial climb, if autopilot is off autothrottle comes off. This is a 737 thing. I know the 777 guys leave it on. It’s a different machine. When I flew the 757 we’d also turn off autothrottle whenever flying manually. Why do we do it this way? Because that’s what the manual says. Simple as that.
During the cruise it’s on. Above a certain flight level, airlines will require the use of autopilot. To fly in RVSM airpsace you need the autopilot. This notion that pilots don’t do anything because we’re always on autopilot makes no sense. The autopilot is stupid. We’re still flying the airplane ourselves. We’re managing the energy and staying away from bad weather. We just do it through knobs rather than the yoke to improve safety. On a normal day, a pilot will disconnect the autopilot and autothrottle at around 3nm from touchdown. You have to realize that we’re landing the airplane like 10 times per week. We’ve already had our fun.

When we want to have real aviation fun, we rent a cessna. Flying the airliner is WORK and a good pilot will try to have the day as boring and safe as possible.

Claps for you sir! Thanks for taking the time to educate us and sharing your knowledge.

From now on, when my wife bothers me while i´m flying my Boeing, ill tell her i´m working and only fly my cessna on weekends for fun.

What´s your favorite plane for aviaton fun? got me curious here. feel free to list some of them! I´m sure people would love to know.

On my end currently the Cessna 310R