With Windows 10 and DX11, I had one CTD immediately after updating to 497.09. I restarted FS, and then flew for a little over 5 hours with no problems. Frame rates appeared to be unchanged (55-60).

my fan is on 100% almost all the time through a flight. not allowed to fly when family is watching tv, because they can’t even here themselves think.
My wild guess is that it has been optimised for xboxers, and pc users have been left aside since SU6. so disappointed…so much

I have flown all afternoon on 497.09 and not a single CTD.Running an RTX 2060super win10 clean drivers installed but GForce Experience not installed.

Hey ladies and gents, this is a special moment for me…I just installed the 497.09 driver…

I started the sim, DX11 mode, picked Cessna 172sp for a spawn at my local airfield, pressed FLY - and soon after during the loading screen my simulator crashed for the first time in my life…since I have MSFS since October 2020.

It just exits…no, it cleanly and silently disappears. Without a trace. As if nothing happened. Not even a sound, not a single leftover process, nothing…I even caught myself in a dilemma “did I really start the sim, or was it all just a mirage, a fairytale, a flashback sort of thing…”…

It’s not a CTD - it’s DTD (Disappearance To Desktop) !
What an experience…

I switched to DX12 and it works excellent now woow - but the latency thing drives me crazy, you know…it’s not the classic stuttering.
It feels as if sometimes your mouse accelerates when you move your viewpoint. For example, you wanna take a look at your 2 o’clock, then suddenly you end up looking out of your own ■■■…kinda thing…

What do you think is the best way forward at least for this evening?
Rollback?
Anyone know of any tricks to alleviate the existing DX12 issues?

DX11: Can’t even load in a flight, CTD while loading

I recommend that you fill out their feedback form to let them know how widespread these issues are. 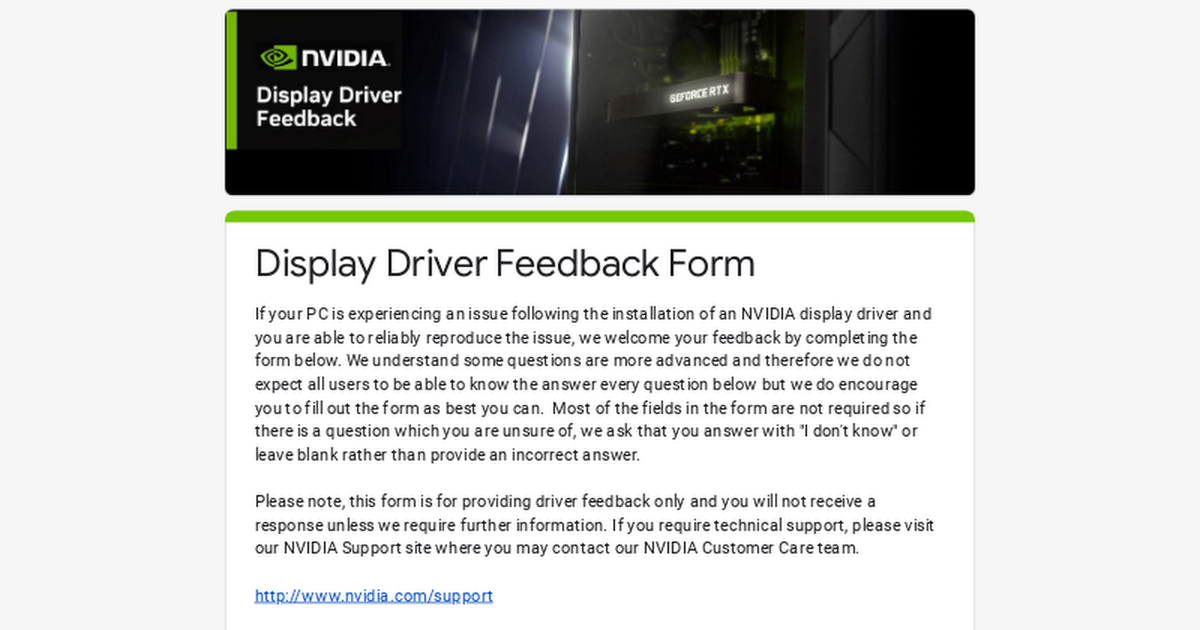 If your PC is experiencing an issue following the installation of an NVIDIA display driver and you are able to reliably reproduce the issue, we welcome your feedback by completing the form below. We understand some questions are more advanced and...

Hi all, first post here as I’ve only had the game for a few days. The game has had no additions, it is plain vanilla, the only changes have been control mapping.

The first two days, everything worked fine. The third day I updated to 497.09 and the problems started. Initially I could get to the runway and then it CTD when I tried to look around in the cockpit. Subsequently, I couldn’t get past loading screens and it never fully launched. I downloaded an earlier driver and it has worked fine since then.

CTDs (never had them before) and blue squares in scenery for me too so rolled back to previous driver version and voted as above.Use a 1060 6gb card.

DX11, RTX 2070. I see blue patches on the ground in every flight, but so far no CTD. Last flight took 3 hours and I saw blue patches since first minutes. When I turned the camera view away from patches and then looking at the same place, sometimes blue patches dissapeared.

How meaningful can this poll be without knowing what Gen GPU a user is running?

Dx12 bad performance with lots of stuttering but no ctd

I returned to old drivers. An hour lost to solve the problem.

windows 11 and updated nvidea, every flight a CTD. Cant reproduce the time/circumstances of the CTD.
Yesterday, i managed 1 flight without issues. So for me its completly random. Have also (blue patches) issues in other games.

I installed the new driver and tried a few other games and applications first with no issues at all.

In MSFS using DX11 it had excellent visuals and was very smooth but I did notice a couple of the blue / purple artifacts. They were smaller and less numerous than in the screenshots above, and did not appear in every flight but were definitely present.

Switching to DX12 I repeated the same test flights, and there were no blue squares and also far less of the downsides previously noted with DX 12 compared to 11. For me on my pc it had arguably slightly better visuals than DX11 with no really appreciable fps hit, but it did still have some very small stutters that didn’t happen with 11.

It may be that these stutters with DX 12 could be further reduced by tweaking LOD’s, but the above is purely about the effects (for me) of the new driver and no other changes.

Had a few CTD with new game driver and then I installed the STUDIO DRIVER and so far so good.

My wish is that Asobo will now focus on fixing the weather servers once and for all … and the showcase (drone) camera that tilts over time and needs a reset every time you press INS.

PS: … and yes, the stutters micro pauses since SU7 too.