I believe this poll has been created in because of ISSUES caused by the new nvidia driver, rather than improvements.

I can’t help it, my curiosity has got the better of me and I just have to test for myself. If you don’t here from me again my rig has exploded.

I believe this poll has been created in because of ISSUES caused by the new nvidia driver, rather than improvements.

Hi,
I realize that the main purpose was to highlight any issues with the new driver. But why only discuss the negative part and not the positive as well? Some of us, like me, possibly the majority, who did not vote, may have had a positive experience.

Screenshot cropped and resized for convenience … 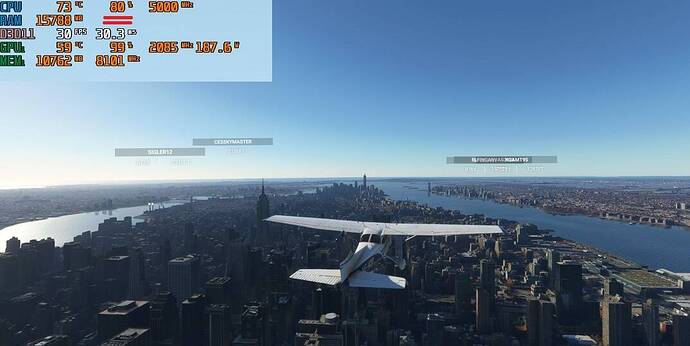 Constant high CPU use (this was the highest I saw) as compared to old drivers.

Minimal add ons, no extra liveries but for 5 172 repaints.

Edit:Game settings all ultra, primary scaling 85% secondary @ 1.111121 via user-config edit for 1200X6400 final render. Everything but airplanes turned down to 5% (vehicles boats ect)

Edit2: I did have a game crash after flight trying to uninstall the fall trees mod???

Well that didn’t last long MSFS is stuck trying to load my Cessna into the default KLAX. No CTD just endless CPU usage at 8% and a stuck progress bar. I shall try once more with live weather turned off this time.

One last try at my trusty EGZU in a Solo. If that doesn’t load there’s something seriously wrong

Possibly but I performed a clean install of the driver and without GEF so I doubt it.

My next test and I shall delete them

Edit: Can’t even load in to a simple airport with a simple Solo … This time it did CTD on loading … DDU here I come

Wow … that is one broken driver. I just booted to safe mode and once in it just went crazy with the desktop refreshing at half second intervals and no access to apps or explorer. Its a shame I couldn’t capture it but nothing was working.

I guess I’ll just have to DDU twice in normal mode. See you later

Back to 496.76 my safe mode problem persists so probably Windows 11 rather than the Nvidia drivers … but it’s unusable so will need fixing.

Nope unfortunately. I clear my shader cache after each driver install - still artifacts and CTD (have rolled back since and am running normally).

When I updated the driver to 497.09, I was on DX 11 and instant CTD which might I add, I have not had for some time. Changed to DX12 (beta) no CTD and did a 1 hour flight from LEVC to LFMP. FPS are not really that different, still getting between mid 40’s(at a payware Airport)and up to mid 70’s(whilst flying). Not getting these blue patches as some report but am getting some darker texture colours on the ground in some places. I’m wondering …is it the nVidia drivers or SU7, because I did not get these different textured patches befor SU7.

Tried the same drivers on dx12 and same exact issue. My best guess is that over voltage protection is kicking in to protect my PC as it’s a forced shutoff of the PC with no blue screens or anything. I can load up into the main menu on both dx 11 and 12, but as soon as I attempt to load into an airport it immediately crashes.

if driver broken*, clearing cache can not help, there write not right and read not right, are you sure you clear nvidia shader cash? not indexed msfs files? btw i have ctd only after many time restart simulator, first, second and may be third flight o.k. after some flights ctd start, restart flight ctd again, i guess untill restart windows
*broken in our case, i think, incompatible with some library in windows or software in memory, i have w10 2h21 all update include optional, updated intel drivers, so may be because of all this no big problems, all new drivers tested at full updated system, so for use new driver need full updated system, but of course we can have some hardware specific problem, but i don’t think so

497.09 is working out great for me! Sucks so many folks are not having the same experience.
VR has been great with 497.09, no CTD switching back and forth from VR. Performance seems good. Def keeper for me!
3070 12700K DX11 Reverb G2 with Motion repro

It’s amazing that we can be so divided on something like a driver set?

Updated to this, windows 10. RTX3070 and Ryzen 3700XT. Saw blue patches, CTDs whenever graphics needed to load in. Just rolled back to the old version.