From that screenshot, I can’t see what category you are in.

For example, you should be able to create a topic here in "Installation, Performance and Graphics: #self-service:install-performance-graphics

The communication also comes in subtitles. That’s quiet too. And I checked the settings - ATC is ON.

Did that just come out? I had the sim loaded not too long ago and nothing was prompted.

Yes it did here.There is an update at Microsoft Sore and then another one in the sim.

[Release-Notes-Banner] RELEASE NOTES 1.29.30.0 If you are playing on PC, outdated packages in your community folder may have an unexpected impact on the title’s performance and behavior. If you suffer from stability issues or long loading times, move your community package(s) to another folder before relaunching the title. https://flightsimulator.zendesk.com/hc/en-us/articles/360017133940-All-versions-How-to-maintain-and-update-Microsoft-Flight-Simulator- General Bug Fixes Several c…

Yeah this was a 32kb update, from what I already had on the SU11 Beta.

Also an update in the Content Manager about 1 GB

I am not at the computer right now. Another new update or is it the one from yesterday?

Edit: It’s the update from yesterday.

I would love to see Asobo to change the light effects a bit.

It’s 09:00 here in Germany, watching out of the window it’s daylight. But in FS it’s completely dark at my location.

Also during the morning hours, when the sun goes up, it’s grey-ish outside… but in FS it’s always like a brown mud colour. I hope this will be updated in future

This was 28-minute flight going around Birmingham, UK, but the flight log only recorded about 5 minutes in the log! 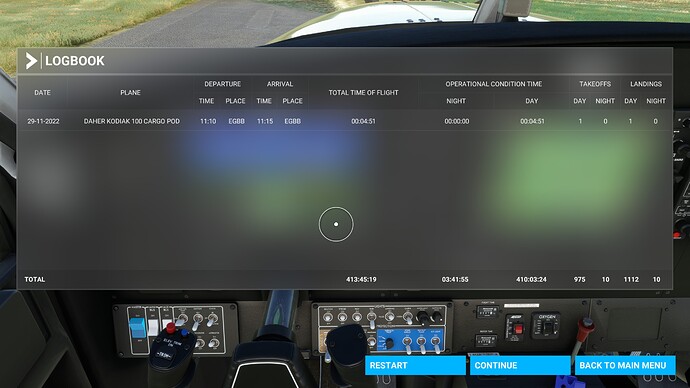 Are you sure you didn’t go thru a warm hole?..

The log book went through a worm hole. I have lost at least 50-70 hours due to this log book error.

This has been happening to me since the latest 40th Anniversary update.

I have got tens of hours not recorded. At least 60-70 hours

I was just looking through my log book last night, and I have a few mis-logged flights as well. Outside of CTD, which I haven’t experienced in some time, I can’t remember when I’ve flown an “incomplete” flight.

I’ve got a few entries in my log that tell me my flight ended in the [Vicinity] of a location. Sometimes, a place en-route to my actual destination. It’s like at some point in flight that the log just stops tracking the flight altogether.

All these incorrect log entries are from the last couple of weeks since SU11 landed.

I just had another small sim update install tonight anyone else seeing this. No release notes. Just saw a ref to “WTT” or something like that. Version number is still 1.29.30.0.

I’ve got a few entries in my log that tell me my flight ended in the [Vicinity] of a location.

I’ve had a few of these. Just a guess but, depending on the field, I think landing parameters may be offset from the graphical runway. Thus, the sim may not detect the landing because it thinks I landed next to the runway. This seems to happen a lot at grass fields. (Some fields don’t even appear to contain a runway!)

I don’t think that’s the case. I’m using solid, paved airports that I normally fly out of regularly without issue. Only now there’s a sporadic issue with logging that started with SU11.

Most recent example of this was last night. I flew KOPF to KORL, which is roughly a 1 hour flight. Log book shows 2 mins of flight time with start at KOPF, and ending in the vicinity of KFLL, which is a couple of miles north of KOPF. This is obviously terribly wrong.

Another recent occurrence is a flight from CYOO to CYGK. Log shows the flight ending in the vicinity of CYTR, which is like 100km away from my destination.

I’ve got others in my log book and they all started since SU11. Well, in my case, since the beta of SU11 about a month ago. I don’t typically look at my log book often. Just happened to look into it last night and noticed this and looked deeper.

Every day something new. A standard ifr flight from Birmingham to Stansted, get to Stansted, no runway lights again… Its a constant thing every day with this game.
Got to the point ill put the game down and try something else.