Pop out displays A320 kills FPS

My fps crashes from 30 down to 10? when popping out MFD and ND displays, does anyone have a fix for this issue or are we still waiting?

I believe it has been like that since day 1, no fix / workaround that I know of.

That said, there are ways to optimise this process which I guess Asobo hasn’t implemented yet. A 2D copy of the gauge output ought not to take much to render, so it definitely shouldn’t have this bad an effect on the performance. I just don’t think Asobo has worked on this properly yet and it’s probably going to have to wait until multi-view support is enabled at some point next year to ‘fix’ it.

What’s starting to worry me now is that I don’t think it’s going to be possible to render multiple views (outside views or pop-outs) onto multiple monitors and maintain anything like acceptable performance. Other sims have the same issues but they aren’t drawing the same level of detail so it’s not as bad. And the other main sims (P3D and X-Plane) both have ‘multi-channel’ solutions available to let you spread the load across multiple PCs. I don’t see MSFS doing that any time soon and while there is a 3rd party option available, it’s not very easy to use.

yes I would love Asobo to create browser based glass cockpit displays that can output to separate pcs or even ipads and android devices like skyelite does. (on home networks) especially for the a320

Given the gauges are WASM based, it ought to be possible to do that since you could in theory run them in a browser. Though I confess I don’t know enough about how the WASM host links to the sim core to say whether it’s easy / hard.

SkyElite for MSFS 2020 - YouTube. i use this on a surface pro with 2 browsers and 2 monitors One monitor displaying PFD and the other Map or flightplan. no impact on my Fs2020 running on a separate gaming laptop

tldr for OP; This has been there since day 1, and at this point appears to be a major limitation of the UI that’s not going away anytime soon.

Even popping out a toolbar panel that displays a simple line of text can halve your framerate, or incur a huge hit, like 20%, when there shouldn’t be any hit on FPS at all doing such a thing. There are multiple issues here. It appears that if you have vsync on, it counts the pop-out render as the next pass, which effectively halves your frame rate. Then there’s also some huge penalty for just popping out a window, which I’m guessing is overhead from the UI library probably doing a lot of unnecessary and really costly work like resetting or resizing swap chains or render surfaces.

This affects the panel instrument pop-outs as well, in addition to whatever cost is incurred actually drawing the gauge. But this base underlying issue in the UI is the big culprit.

Asobo is using an off the shelf UI library, and it’s either badly optimized or they aren’t using it properly. I suspect they did it just to get the product to market as quickly as possible. Fixing this might involve a major overhaul, like ripping out that UI system.

There’s no fix. We’ve been asking Asobo about this since launch but been ignored since. Please enter your vote in the thread below so we can raise the visibility of this issue.

I know this may not get a lot of votes because it is narrowing the type of simmer, but some of us are using external monitors & touchscreens in our setups so we want to drag the GPS and MFD displays to separate monitors. I’m honestly impressed that they have the feature but man that performance hit - I am going from 45fps to 32-35fps once I pop out the MFDs and move them. I tried setting the refresh to LOW but it’s too choppy for my tastes. Left at medium. It’s such a shame the performance tr… 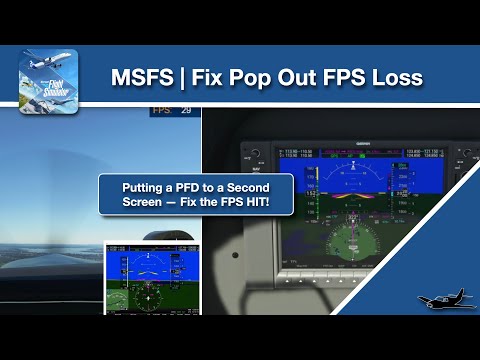 Hope this works for you.

Michael Brown made several videos how to enable onboard graphics: https://www.youtube.com/user/col2mab/videos

which video is it exactly?

Did you lock your FPS at 30 anywhere? I locked my fps in nvidia inspector because my GPU would run hot in the sim menus. And from that day on the pop outs created fps drops by 30-50%. Unlimitted fps solved it for me. No fps loss at all with pop outs. Also vsync/gsync might cause the same problem.

This depends on your PCs motherboard. MSI, ASUS etc.

I don’t have integrated graphics but I have a backup 5450 installed, will this work?

EDIT: Just tried it, doesn’t seem to help. What is it about integrated graphics that fixes this?

Integrated GPU wont fix this for everyone, didnt for me. I had to reset any external fps limit and set fps to unlimitted, also no vsync to get pop outs working with no loss of fps.