Probably more of a Peripherals topic, but it begs visibility...BRAVO TRIM WHEEL IS GOOD NOW

My Honeycomb Bravo behaves like an axis now, not with little button presses, which seems to have resolved a problem that I’ve seen on this forum going back over a year now with MSFS (all platforms).

Not quite following. Do you mean you are now binding the trim wheel as an axis rather than as pair of buttons? The actual hardware is an encoder, not an axis, nothing short of teardown and modification of the kit can change that. On the other hand it’s perfectly possible to make it so that an encoder (or any pair of buttons) works as a trimmer for an axis with each click adjusting the axis by a bit, and I suppose something like that could by implemented by MSFS software.

Given your options, I guess it’d be the latter? I’ve just read over and over again how people who use the Bravo are perfectly happy with trim wheel behavior in other sims, but MSFS2000 made it behave like encoder button presses. As of tonight, update 1.29.30.1 has made my Bravo trim wheel behave just like an axis (easy to quickly change trim, reacts to speed of wheel spin, etc).

Are you actually binding it to the trim axis though, or is it still bound to the trim buttons in control options? It’s possible they simply improved their encoder logic, at least on Xbox (on PC the limitations of the USB game controller interface might restrict their options).

You’re making sense. It seems as if that’s what has been done. I have not changed any of my default bindings to the trim wheel axis/button/encoder thingamabob. Hacked up all my profiles in every which other way, but have never messed with the trim wheel. Tested this new behavior on 3 different aircraft, all with their own profiles:

That is great news if really improved. I’m waiting for this update on Xbox to verify. I guess this update was the accidental early push that PC user got through the MS store?
Edit: I see you said Xbox. Will check later after work.

Topic moved into #sim-update-11-beta:general-discussion-su10 as this is relating to a Beta build.

Can’t say I’ve noticed any changes on PC, though I’m binding via spad.next to simconnect events.

As noted, the hardware is not an axis; it produces brief button presses every few degrees as you turn it.

Testing with the default GA bindings, it takes about 8 full spins of the wheel to move the trim from one end to the other on the Cessna 172 (G1000), which I think is more than would be realistic, but at least provides more precision than ~3 spins would (which is what my previous research seemed to indicate is right for the C172, but I could be wrong).

Does seem to move in larger increments via MSFS internal binding than via SimConnect, which I can’t explain.

Just tested 1.29.30.0 (I guess you meant this version and not with 1 at the end?).
In the default C172 G1000 I think I feel a slight difference, but I’m not really sure. Maybe it’s just my imagination wishing for an improvement.

But I’m sure that it feels nothing like an axis. I previously had the VF1 yoke where it really is an axis and it felt amazing and smooth like butter.

For me with the honeycomb it still feels far from being good in the plane I used. I had high hopes but it is slightly disappointing for me to be honest.

Still need to do a complete 360 degree spin to achieve about 2% trim and feels inconsistent. You don’t know what you will get when rotating the wheel.
If I would spin from one end to the other of the trim range it would require around 200 full spins of the wheel I guess.

I have just tested with the a310 and 737 and it seems to be working how I’d expect. I have 0 experience with the real thing so i can’t speak on that, but the behavior is no longer annoying as it used to be.
It does feel like it is improved.

Just tested on the 172 and by spinning the wheel at about 1 rotation every 3-4 seconds i was able to get end to end in 3 rotations. Faster rotation makes it take about 11 rotations end to end

Yeah, so, the Bravo trim wheel, for me, as it sits right now, behaves almost identically to my old VelocityOne trim wheel.

That is astonishing. Don’t know why it’s completely different for me.

Have you tried slow rotations…i mean slow…3-4 seconds per rotation? The travel is vastly increased for me when i go that slow vs fast spins

I’ve uploaded a video of the behavior here: 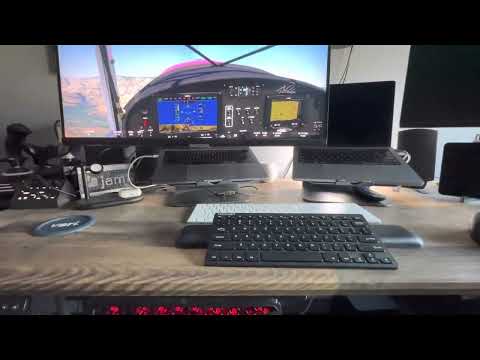 Sorry, the proximity of my Bravo to my monitor might make it tough to gauge, but if you watch it a few times and pay attention to my trim adjustments as well as the values in the lower right of my HUD, you’ll see the most minor adjustments are now resulting in aircraft trim changes. The faster I go, the faster it goes. It’s like night and day from what it was before.

IIRC from when I tried to measure it before, the Honeycomb wheel does a button “click” about once every 4 or 5 degrees of rotation. So if you slowly rotate 20-30 degrees like I see in the video, it’ll “click” several times and cause the trim to change a few notches’ worth.

[The real trick is dialing in an amount-of-change-per notch that works at comfortable speeds. I will say I think it’s improved; the current balance in the beta version is working well for me too!]

Thanks guys for the quick responses, even uploading a video! This forum has some really cool people!

I rotate about the same speed as you do in the video, but it doesn’t feel very comfortable or axis-like for me. At least not in the Cessna 172.
At least I felt an improvement, however not as responsive as my old Velocity One wheel.
Need to test a little bit more when I have some more time. Maybe I just need to adjust myself to it

The other problem with sim trimming is you don’t feel the pitch.
In a real aircraft, when you trim, you don’t directly SEE the result but you do feel it instantly.
This helps you judge the amount of counter trim when approaching desired VS speed.

There should be some kind of counter trim option in the sim that stops the vertical speed with less delay when you are approaching your desired vertical speed. Or maybe even a button that freezes your desired pitch. The overcompensation of trim is so annoying. It’s practically impossible to maintain level when hand flying. I sometimes just switch on autopilot for a second to get into level state.