Hi, it seems to me that the only actual simulation is the flight aspect of the game. You can overstress/overspeed the aircraft and you get the black screen game over. This led me to think that the systems were being somewhat simulated.

Then I noticed that the inertial separator is there just for decoration, as the game has no FOD either simulated or faked.

Now I just tested going through heavy icing conditions with all de-icing systems off and my torque at 109% for an hour straight without any problem on the TBM 930. Also sat on the runway with my ITT at 1400° for a minute, then took off without issue.

My assistance setting is set to “True to life” which supposedly enables the engine stress damage and icing effect, yet it seems nothing actually happens. Am I missing something here? Or does the Icing and engine systems are also mere decoration? If this is the case, is there any plan to add proper aircraft handling to the simulation which I’m not aware of?

Now I just tested going through heavy icing conditions with all de-icing systems off and my torque at 109% for an hour straight without any problem on the TBM 930.

Also sat on the runway with my ITT at 1400° for a minute, then took off without issue.

Since there’s absolutely no reason for the ITT to increase above normal level IRL, it’s a lucky coincidende that the high temp doesn’t cause any damage

I see, gonna do some stress tests before jumping to conclusions here. Thanks m8.

Edit:
So, I can just sit here on the runway like this for an indeterminate amount of time (10 min at least), then release the break and fly off with no problem whatsoever? 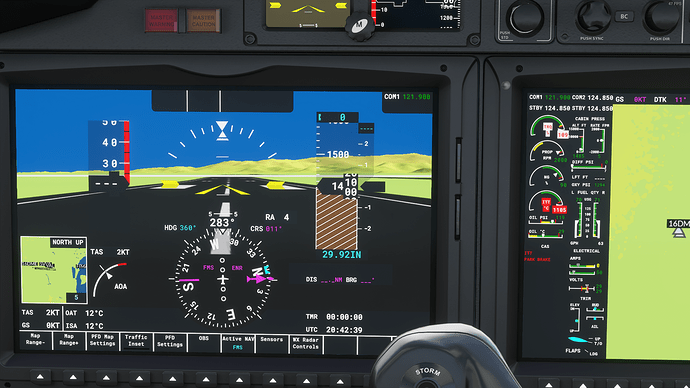 You are over-torqueing the engine, and it’s ITT is through the roof, so yes, but only if you have damage modelling turned off.

I already have assistance set to the “true to life” setting which includes engine stress damage. Is this damage modelling setting apart from the assistance settings? Where can I find it?

The only other settings are in General/Flight Model, but are only available if you select the Legacy (FSX) Flight model.

Just to make sure; Using any other flight model than MODERN is a definite no-go for all default MSFS aircraft.

I appreciate the suggestion. Just tried out the legacy model and didn´t notice any difference. I’m kinda new to the flight game sim genre. Maybe the oblivious overtorquing/overtemp without repercussion is actually common among other games, no idea tbh. I bet it’ll be trivial to implement as a mod. I’ll check out the SDK as soon as I get some spare time to fiddle with it.

The limitations would need to be defined in each model along with a mechanism for tracking time within each limit. I haven’t looked at the model definitions to see if this is the case. The appropriate degredations would also have to be modeled, not everything leads to catastrophic failure. Icing needs to effect props/rotors as well as flight surfaces and engine inlets.

Yes of course, I wouldn’t dare trying to make a realistic simulation. I’ll just try a simple probabilistic model based on the operating manual handbook of one aircraft and see what can I make of it. I mean, if you get really technical, I wouldnt say the current way the game determines you overstressed your airframe or landing gear is actually simulated. Rather you cross a predefined threshold and that’s it, roll the black screen.

It may just be me, but has the threshold for any sort of overstress/speed & damage been lowered? Recently (read since post 1.9.3.0), I only have to bank too hard in the C172 to get the black screen of death.