EDIT: We are calling it simulator but is it? Mostly everyone I talk about the issue with replies “You can assign a button to trigger reverse mode and then just move your throttle forward”

This is not related to prop planes. We are talking about Jets and mainly Turboprops that has different and larger scale on its throttle quadrant to operate power management and feathering.

So it´s not just about FORWARD and REVERSE. The baseline for throttle operation/settings is coming from turboprops that also includes BETA range (which sound we all turboprop-ers love so much!)

Does anyone remember how long it took for XP to implement this lovely feature into sim settings?

FIY: I got my DIY throttle up and running in the range it supposed to have. All I want is to implement such a function as VANILLA for everyone and also those with commercial HOTAS.
If it was only about me I would not bother to start this topic. 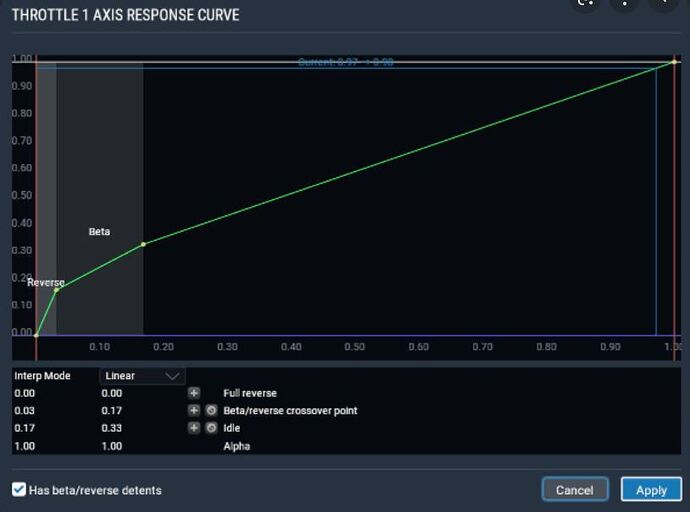 My biggest complaint is that I can’t manually edit the throttle curve. I have a Virtual Fly TQ6 and it has a physical detent for reverse/beta. I would like to be able to set it up to where at the very least, 0 throttle starts at the detent. As it is now 0 throttle in sim is max reverse on my quadrant. It would be even better to be able to make the beta/reverse on my quadrant to be beta/reverse in sim.

I feel your pain! Virtual-Fly states on their website that their “Test and Calibrate” software will be available. This should allow reverse function on theTQ6. Unfortunately, it is still not available as of yet

Yeah. I personally love how X-plane handles axis tuning. I can do everything from in the simulator

Hey Asobo
It would be really handy if we could set our own calibration curves for control axes. Especially for the rudder this would be quite helpful.
Thank you!!!
André

Agree, until I can get rudder pedals (supply/type I want) using a switch on the yoke (no joystick

) it is an all or nothing affair - jerking/snapping movements, cannot hold a deflection though on the ground there is some control if you click the switch a dozen times or so, to turn and line up on the runway. Once in the air, at least in the Caravan and the Icon and a few others, it is just a spasm-fest - snap/jerk/snap center, rinse repeat.
The rudder is the one primary flight control - across the board, I think - that needs some serious love and attention.
Perhaps with rudder pedals it will be much easier but right now they are hard to come by and the ones I really want won’t be out for 9 months at least.
Any attention/assistance/new settings would be most appreciated, Devs

I agree that we need something. With XP I could just slide my saitek throttle into the reverse thrust position (which registers as a button), and my prop into feather.

In this sim, although the button registers in the settings, it doesn’t work. I have to use a key to switch to reverse thrust and throttle up again to get into that range. For feather I have to manually do it with mouse.

Such a simple thing messed up- it needs to be fixed without 3rd party software.

Having this per aircraft would also be great.

Great post! Been waiting for Asobo to implement this feature since release. I also sent a feature request via zendesk a long time ago regarding this.

Thank you so much. Well I been expecting that as a standard… but not only that was missing but there were no sensitivity curves from the beginning which surprised me even more

So let´s hope It will find its place in the settings.

Absolutely! Many years ago I was using Saitek X52 Pro which had also detents. You just picked up the value at the detent to assign function Beta/Reverse and boom - was working for any airplane even the paywares. Not a big deal.

Programmable electronic detents are also something we might be seeing in the future. VKB claims to have already filed for patent. Those would really be crying for detailed axis setup (and ingame profiles), since you can set the detents to be exactly applicable to the aircraft you are flying on the fly without opening or even disconnecting the controller.

That’s for sure an interesting idea and although I am more into DIY and making my own designs I was thinking about a mechanism to change the detends and make it more universal.

Anyway there is no limitation in mechanism as you can do whatever you want , it’s only limited by SW atm.

Should Asobo introduce this it will be important to also consider turboprop´s real life operation:

This regards BETA throttle positioning during Taxi operations. There is a distinctive sound of turboprops during taxi because in order to keep the taxi speed low, Beta is used. I noticed MSFS Turbo Prop aircraft, specifically the TBM930 and Kodiak, tend to stop (some actually back up) when entering the BETA position. As said, BETA position is used to slow taxi speeds prior to going into complete reverse thrust. It’s really pronounced with the new Kodiak since taxi speeds increase rather dramati…

Oh yes. I totally understand the topic with Kodiak.

I am just asking myself If Asobo has it on their TO-DO list or It´s supposed to be reminded via wish-list.

If the second option - That´s what I am trying to do here but I need to make this thread more visible so keeping up the discussion, comments > will help to keep the post up in the category.

We are still waiting for proper throttle curves(like x-plane) for this sim. Using a switch to reverse prop thrust is just so 90’s. Come on Osobo, Microsoft make this happen, get with the times…

Completely agree! We need proper beta implementation (for turboprops) as well as the same functionality as in X-plane where you can assign curves, beta and reverse to the power lever axis. But please add a gate that can be disabled by a button press to avoid unintentionally going into beta or reverse in-flight if you pull the power lever too far back.

And, as a matter of fact. This is one of the biggest “deal breakers” currently in the sim in my opinion. This issue as well as the broken turboprop logic needs urgent addressing. It’s been here for over 2 years now, so it’s about time it gets addressed.