Pros and Cons of the Baron G58

I’ve been flying the Baron G58 in MSFS a lot lately. Since it’s a deluxe plane, the config files are encrypted and there are currently no community mods for it. For whatever reason, Asobo configured the plane to always use automixture, so moving the mixture levers has no effect. In spite of that I find it very enjoyable to fly. It’s a great airplane for long cross-country flights – definitely faster than the DA62, although I find the DA62 easier to land.

From what I can see, here is a quick run-down of the pros and cons of the Baron:

I haven’t seen much discussion of the Baron, so I’d like to rectify that injustice! For any Baron pilots out there in MSFS, what do you like or dislike about it? 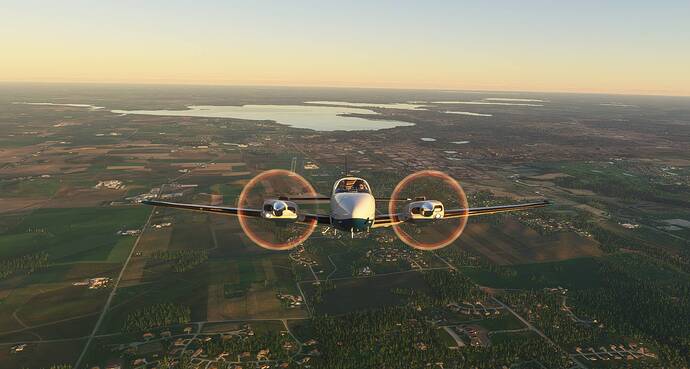 I’ve also been flying the G58. I’ve liked it quite a bit, but came here to look for better alternatives, as the downsides are starting to get to me.

Your pros are great. The thing does fly like a beast. But:

I’d love to hear from somebody who’s really flown one of these to hear if it behaves at all like the real thing. I have a feeling the deluxe planes aren’t getting any attention.

Like you, I really enjoy the Baron. Would like to see an upgraded avionics system (mouse click on a key pad rather than work the double knob) but this is not likely to happen. I do hope there are some +ve updates to the AP to make this solidly reliable. The Vs component works great as does nav/gps while enroute. It is the arbitrary non-lining up on the runway that is giving me grief - switching to appr 10 miles out. I did try the VOR while hand flying but missed the airport by miles - using the direct to button. A huge improvement for me was adjusting the seat height upwards from the 50% default to the 75% range. Options-general-camera (cockpit) - height. Once set it works for all the aircraft on start up.

I’d also be curious to hear more real-world comparisons from pilots who have flown the real thing. Here’s one comment from a real Baron pilot on another thread:

Hi, I own this plane and it is wildly OVER powered in the sim. Its climb performance is radically too high with climb out well above 3k fpm @ 170 knots. The real world performance (and I can screenshot my POH) is closer to 150 @ 1200 fpm. Cruise is 202 knots when flying full mixture (I’ve never seen 200+ in my plane. Maybe 190 once), but with the engines we typically fly what is called “Lean of Peak” or LOP. I tend to hit about 185 knots true airspeed around 8k feet. The service ceiling is actu…

I’m curious to know what you mean by differential thrust not being modeled. I practiced an engine-out a few weeks ago, and the airplane developed a significant yaw toward the disabled engine (just like I would expect).

Sure! A lot already mentioned, but I’ll add to what I have:

-Differential thrust on the ground helps you turn, that’s not modeled.
-The yaw factor you mentioned is lightly there but check out Carenado’s Seminole to get a bit closer to how a twin actually handles on single engine operations (SEL). (weirdly you can’t completely feather the prop and shut down the engine)
-They could have literally taken the fuel pump sound from the bonanza, but the fuel pump has no noise.
-rudder control is awful on takeoff role and way too sensitive above 60+ knots

The 58 is a beautiful plane for a twin. I owned an A36 prior to the B58 and wanted to step up in platform to a twin for cruise safety for my family. I was flying from Pennsylvania to Texas one time and it was getting dark and even though it was in my mind I would spend the hours just intensely scrutinizing every engine noise and sound. Just wanted the piece of mind of an engine failure at cruise (takeoff is a completely different thing all together that you just have to keep training for).

Anyway, I have about 500 hours in the plane and 1250 TT (300 in a Bonanza). I fly up and down the east coast and an occasional trip from Pennsylvania to Texas. I’ve never had to use the deice but I plan accordingly and avoid ice at all cost even though my plane is FIKI.

prop feathering has no effect

Are you sure about that? Featuring the prop affects airspeed and engine noise in mine.

As for the Baron, I’m really liking it. I was flying the Turbo Bonanza mod by Robert Young but lately I seem to be splitting my time between that and the Baron.

The Baron was one of the reasons I bought the Deluxe version, but recently, I’ve become hooked on the DA62. It only carries four souls, but it’s small, light, and really quick. It’s speed, ceiling, and range are all only slightly less than the Baron. And with the DA62X and G1000 mods installed, she’s a real joy to fly.

And if you use any career/economy addon, you may find the vastly decreased fuel burn (it has almost the same range, but only carries half the fuel) to be a real win.

Adjusting the prop lever definitely changes the prop RPM, but the prop will not “feather.” Feathering refers to tilting the prop blades so that they are in-line with the airflow to minimize drag when an engine is out. As I understand it, the real airplane will feather the prop if you pull the prop lever all the way to minimum. In that case, the propeller will remain stationary even when you are flying.

I have hours in a real B58. One note. Cowl flaps don’t really affect drag. It’s barely noticeable when flying. It’s main purpose is keeping CHT warm in descent to prevent temperature shock.

Otherwise, I agree with everything else that has been critiqued. I really enjoy flying it too, both IRL and in game. However, my heart stays with the B58. Having bigger engine gauges is a better thing than the glass.

Was gonna say the same.

As I understand it, the real airplane will feather the prop if you pull the prop lever all the way to minimum. In that case, the propeller will remain stationary even when you are flying.

Will definitely come to a stop pretty quickly when you feather it. Haven’t been able to duplicate in the sim. Here is a video I took on a new G58. Hopefully this can be modeled. https://www.youtube.com/watch?v=FMpQwnOIoJI

I was flying from Pennsylvania to Texas one time and it was getting dark and even though it was in my mind I would spend the hours just intensely scrutinizing every engine noise and sound.

We refer to that as the pucker factor - it’s one thing that can’t be accurately replicated in a simulator!

Happens over water when out of glide range of land as well!

Right, and flying a twin from Philly to the Outerbanks, I can now go direct (past Philly airspace) that puts me 20+ miles out into the atlantic without that pucker factor. I would NEVER do that in the bonanza. Its a fantastic feeling.

I would have to say I agree with the climb rate, G58 should be about 16-1700 fpm at Vy. I wouldn’t complain too much about the p-factor. I think its modelled pretty close. Most sim pilots however are having issues with sensitivity. I think its a case of it being a lot more TTL than previous sims.
Because this is a constant speed propeller, when you open the throttle you are at fine pitch but as the aircraft accelerates, the governor takes over at 2200 rpm and adjusts pitch to prevent overspeed. This coarse pitch adjustment is most noticeable at about 50-60 kts. Significant rudder is required to keep things in line.
Cowl flaps should be open for taxi, take-off and during climb. Add that to your cruise checklist, as you trim for cruise, close cowl flaps and monitor temps. Cowl flaps have no significant aerodynamic effect, contrary to some of the comments.
FYI, normal take off in the Baron is flaps UP. The sim plops you on the runway with flaps 15 if you don’t start on the ramp.

Once rotated and gear is retracted dialing back to 2500 rpm and pitching to 154kts gives pretty close performance at my home strip, 2400ft, but is bit aggressive at sea level.

The auto mixture from Asobo is, I think, another example of non pilots trying to interpret complex systems. Mixture adjustment IS automated in the G1000. You manually pull the mixture back to match fuel flow with the blue line calculated by the G1000 and you are done. Obviously it shouldn’t actually adjust by itself as it does in the sim.
The G58 will cruise at 202kts @ 75% as published but not for very long, compared to trimming for about 175kts (55%) where it will seemingly fly forever (about 13-1400nm actually).

Because Asobo has not yet modelled feathering into anything and the propeller drag is poorly modelled, I find the Baron performs much as it would feathered. There would be significantly more yaw until you had secured the dead engine. The sim also allows a bit too much performance on one engine. Full power, feathered and trimmed with wings level you should be able to maintain about 100fpm at 102 kts. Any wing drop, lazy rudder or trying to maneuver will pretty much kill any climb rate.

So in summary, the Asobo G58 is pretty good. I think the reports of being way overpowered are more from guys familiar with the 285hp or even 260hp Barons of yore AND the fact that Asobo seems to have been a bit generous with lift coefficient. I find cruise and acceleration fairly accurate but it does want to go up a bit more than it should which also affects landing. It just doesn’t feel heavy enough.

Dunno. I just took off from a full stop with both blue levers fully back in the feather position. It was slow because the RPMs were low, but it took off just fine. That seems like it shouldn’t happen.

I did confirm that one engine at full induces quite a bit of yaw, so I was definitely wrong about asymmetric thrust being modeled.

I need to watch to see if cowl flaps affect temperature. Since nothing goes wrong in the simulator, it seems this may just be one of those “it matters in real life, but not in the perfect conditions of the sim.”

I think we established above that feathering is NOT modelled in the sim. You just proved it.

It is a good habit to manage your engine regardless of whether failures are modelled or not at this point. If you decide to take advantage of 3rd party aircraft, the good ones WILL punish you if you have developed bad habits.

If you have aircraft damage resulting from stress turned on, failures CAN happen if you insist on flying around with instruments in the red.

25/25 is cruise climb.
Full/Max is best rate/angle depending on the airspeed.
I usually dial it back to Full/25 for noise abatement.
MSFS requires you to dial it back a titch anyway. The governor will allow an overspeed otherwise.

Ah okay. Thanks for the refresher.

I noticed you mentioned you drove a B58. Do you remember what year/engines? If you enjoyed the B58, the G58 would make you leave your wife. The 80 extra horses make a huge difference, especially getting out of the grass/dirt and over the pines at the end.