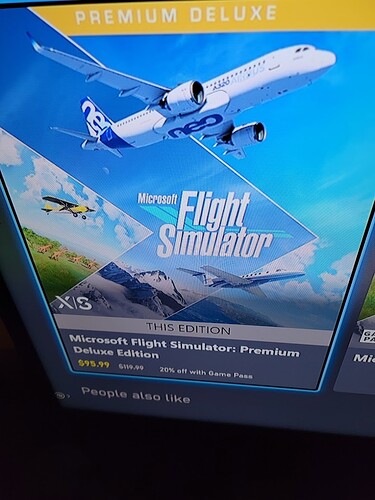 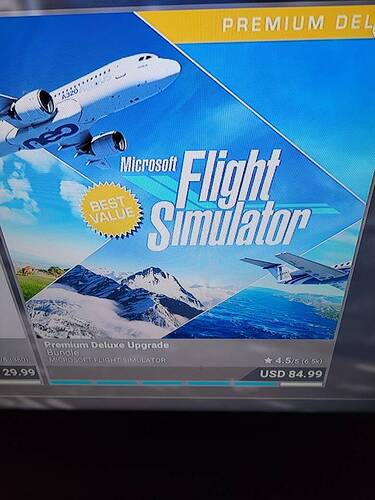 I was wondering, if these softwares are the same? if so, why are the prices different?

Yes, they are the same thing.

Top one - you buy the base game + deluxe for that price.

Bottom one - you already have the base game and you buy the upgrade. It’s much more expensive that way. Better to buy the full thing outright.

Yep, I have been contemplating upgrading to the deluxe, the only reason why I haven’t done that is that the upgrade costs more than the base game. Not very intelligent marketing, if you ask me.

They did make that clear from launch though. Just a decision they made, probably makes sense when you crunch the numbers.

Have you already bought the base game? You didn’t just do the game pass version?

Yes, I have the standard through Steam since launch. It’s the same pricing, in-game or via the portals.

Oh ok, I thought you were on Xbox.

The Premium Deluxe isn’t that great - I have it and enjoy a couple planes (787 and 172) but you aren’t missing too much if you don’t really see a plane you love in the list, or your home airport. My home airport was in there, along with a couple I often transit through, so it’s worth it for me.

Yeah, I would love to have those extra airports, especially Heathrow, as I mainly fly the airliners here in Europe and there are not freeware available, and the planes, but 80-something CHF/USD is just too much. I’d do in a heartbeat for 40.

Just wait and see then. Perhaps it will drop in price at some point, or a third party plane/airport will come out.

Though the good third party planes are going to be expensive. The quality wings 787 will come to MSFS at some point, and that was $80 on P3D - but totally worth it , was much higher fidelity than the MS 787.

I wouldnt mind paying for FBW a32nx if I’m honest. It’s too good to be freeware

Have you seen the videos for the Fenix A320? That looks amazing, hopefully not too good to be true. Check em out on YouTube

Yes, looking good, if it really will be a true study-level one, I will be getting it.

I’m playing thru GamePass. So, the second one then?

Second image is UPGRADE without mention of base files.

So, purchase the GamePass version?

You don’t have any version so for you it’ll be a full game, not an upgrade you need to buy.

No, if you want to buy, you should get the first one. That gives you the full game + deluxe upgrade, and then you can cancel game pass if you like since you own the game now.

If you buy the second, you would have to keep subscribing to game pass since you don’t have the base game.

So, purchase the GamePass version?

As others mentioned, if you have the base version already, the upgrade will do but if you don’t have the simulatore at all yet, you need the full version. If you want the Premium Deluxe or any other version depends on your likes. If you want to fly one or more of the planes included in there that are not included in a cheaper version or want to fly to one of the additional airports included in it, go for the premium deluxe, otherwise you can go for a cheaper version. The game itself is the same.

The top image shows the stand alone price for the Premium Deluxe version of the sim, also noting it has a 20% discount ($95.99 for game pass holders) against its normal retail price of $119.

The bottom image shows the cost to upgrade to Premium Deluxe, to obtain the same additional content. Granted, at $84.99 it is more than the difference between the standard version and Premium Deluxe, but it is quite a common practise for bundled products to be offered at a more favourable price point to entice people to spend more.

If the additional content has enough appeal to you then, yes the upgrade option is the most cost effective route.