I don’t fly much IRL. Are rainbows really as prevalent as in the game? Looks silly to me.

You should count your blessings, for you are blessed.
Yosemitebear Mountain Double Rainbow 1-8-10 - YouTube

Rainbows will appear based on weather and lighting. They modeled it pretty well imo.

I had no idea that rainbows were so common. It seems that every other flight there is a rainbow that follows me. I never have found the pot of gold though

WT… There are rainbows! I really should be playing with weather more!

I saw a rainbow at the Crazy Horse monument and it wasn’t raining. I have screen shots but am at work. It was weird.

I don’t fly much IRL. Are rainbows really as prevalent as in the game? Looks silly to me.

I’d say rainbows are similar to icing in the sim. Neat visual effect, but waaay over done. May be a good topic for a #self-service:wishlist post.

Gets you… Thinking about what people Like / Want … though Ay! Send it to the marketing department!

My guess is being above the clouds creates more opportunities to see rainbows in real life.
However in game they look like they came straight off of a box of Lucky Charms, so no I don’t like them.

Private pilot with well over 200 hours – a lot of it VFR in south Florida where there is LOTS of intermittent and scattered rain showers. Also, many, many years of flying commercially.

Rainbows? Occasionally. In the sim? All the time (too frequently).

But by the way, go out in the yard on a sunny day (next spring or summer), take a hose, and use your thumb over the end to spray a fine mist upward toward the sun. You’ll see a full circle rainbow.

So I agree with the Juice. Rainbows are realistically possible in real life and occasionally realistic in the sim – just WAY overdone.

As a long-time software developer, when potential users are arguing about features or how they should work, I’ve found the smart thing is just give them both and a way to control it. Icing, rainbows, etc. Perhaps Asobo should add more controls – or just a user config file for more advanced users – for rainbow frequency. Hard core simmers could turn it way down for more realistic environments while those wanting that occasionally unrealistic but definitely very beautiful VFR flight experience could have tons of pretty rainbows!

I fall into the hard core camp, and I hate to admit it, but when I’m rarely in touch with my sensitive side – I kind of like the rainbows. No unicorns, though!!!

I never saw one in the game! But I mainly fly VFR, so I avoid bad weather.

I’d like the rainbow effect around the plane’s shadow on clouds.

Actually I think Asobo said they did not model rainbows, they just appear as a consequence of light and rain interacting in the sim just as they do in real life. I personally think that’s very impressive, that something can just happen spontaneously like that within a coded environment.

While that may be true, remember that the sim is necessarily a dramatically cut down version of reality. They can not simulate weather or lighting effects to the depth you see out the window.

Specifically, when it comes to rainbows, the problem they have is the simulation of “attenuation” – dropping signal strength – due to water density, air pollution, etc. For example, they can’t simulate fog – the just put a cloud at ground level.

So the rainbow effect is not very realistic, because the weather has these layers of clouds and no degradation of light signal due to distance or density effects. Just thing of all the times you have seen a rainbow, and I’ll bet it’s typically very faint, or nearly always just a short segment of the possible full circle, or you didn’t even notice it until someone else pointed it out. You also had to be at the perfect distance and the perfect angle for the refracted rays to reach your eyes.

Like I said – two schools of thought. I want pretty even if it’s unrealistic, or, I’m a grouchy old fossil – you can keep your pretty – all I want is what I perceive to be realistic.

Nobody is going to happy unless you give them the whole spectrum and a way to control it. And this – hopefully – is on Asobo’s very deep backlog. You can’t enjoy pretty or realistic until they fix the flight models and AP logic. 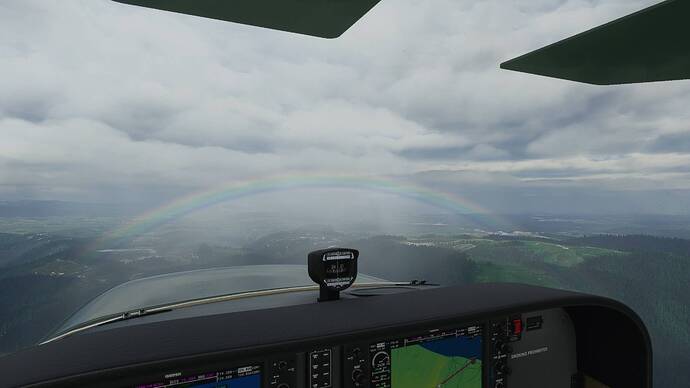 I recently did 260 hours of flight around the world in FS 2020 in realtime and live weather. During this journey, I only saw rainbows once. So to answer the OP, I don’t think it is very common in the sim if you set the wether to live weather. Of course if you set it to wetter weather, the chances of rainbows increase. I double-down and say it is modeled pretty well.

Still quite impressive though that something happens as a consequence of conditions in a coded environment even if it limited. Its not a case of if this and this is true then show this effect after all, it just happens and alright, its not fully simulating what occurs in nature but its better than anything any other sims weather engine produces.

It is impressive in that the model just does it by itself when the conditions are present.

Like you say, if it surprised the developers, then it’s not just an “If clouds are present and the sun is…, then show a rainbow.” It sounds like it’s more similar to surprise reflections from ray tracing reflective surfaces. Kind of like in tons of photographs where you can see the cameraman in the sunglass lenses of the subject.

That is pretty cool.