Fog is required. It is riddiculous to have a Flight Simulator with impressive weather and no real fog. Fog belongs to aviations as much as thunderstorms and sunny days. It has to be fixed!

I get fog in Live weather. To be honest I’ve not tried it as a custom profile but I think you can do this as well, it’s just another cloud layer. Happy tinkering! 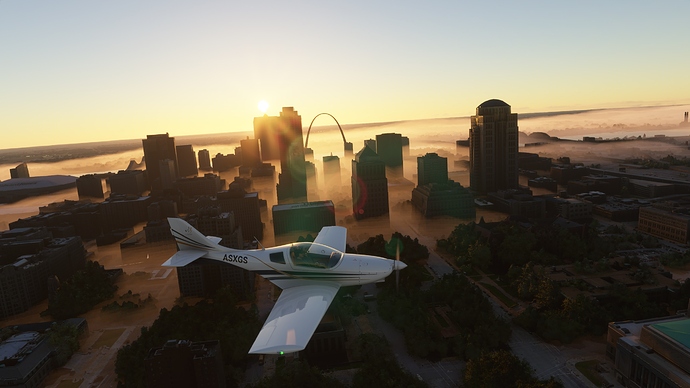 I checked several airports where reported RVR was below 200 m. Not a single Airport simulated the visibility correct. I am a real airline pilot and know how low vis operations has to look like. With RVRs of 200 m you really have to taxi slowly and stick to the runway lights. I never saw this within FS2020 (Fsx used real fog)

Maybe it can be simulated, but live weather doesnt do it correct regarding current metars

Where can I check your presets?

And why isnt the live weather able to use real fog?

Fog is already in the sim. I landed in the fog

And why isnt the live weather able to use real fog?

For all we know it can, but you would need to be at a location where this exists and the sim has correctly re-created this using MeteoBlue’s predictive, non-METAR based approach.

Hand crafting it is certainly possible. Yesterday, I landed at an airport where half of the runway was covered by fog/cloud. All I could see was a grey wall.

I tried 9 airports yesterday with reported fog. Within the simulator I was able to see the entire runway which is far away from fog. I did set live weather

unfortunately Live Weather still does not support foggy or even very cloudy weather.

I am currently in Klagenfurt LOWK and weather reports:

This is how it looks like within the sim: 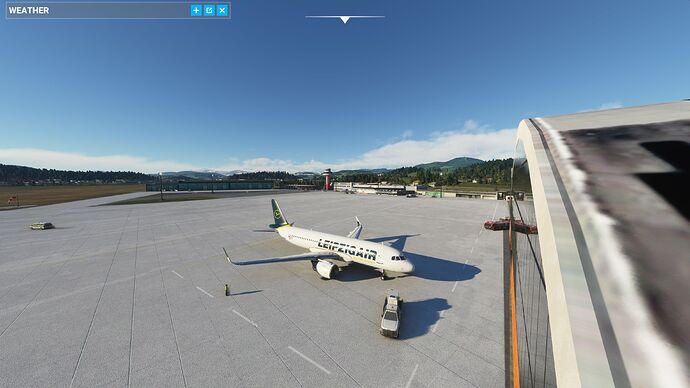 This issue is all over the simulator.

Wind, QNH and so on works great, even rain and now snow. But fog and low clouds…no.

I am a real ATPL holder and have performed a couple of CAT 2 approaches in real and this sim doesnt gets close to low vis. This is a must have within a flightsimulator and should really be improved.

Sorry to tell you, but you complety missed the topic.

As I said, Live weather is working, QRH, wind, temperature…everything fine. It doesnt even make a difference if I restart or reload or anything else. It is just not correctly simulating this kind of weather.

Sometimes you see kind of fog or let’s say, low clouds, but more or less randomly and despite that, it is far away from what it should look like.

That is exactly what I reported - the weather is not loaded into the sim. ATIS says visibility 3 and many layers of clouds while in the sim it is clear skies with unlimited visibility just like on your screenshot.

Check the screenshot…it’s not clear skys, it’s FEW, there are clouds and all parameters match, except the cloudbase and visibility.

You can even load any airport you want with reported low vis, low clouds or similuar, you just get the wrong weather. Even with restart / reload and so on. I never saw real fog within the sim, only “kind of” which isnt even close to fog 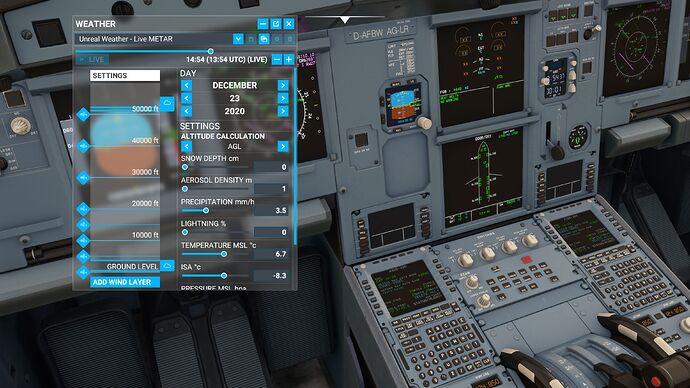 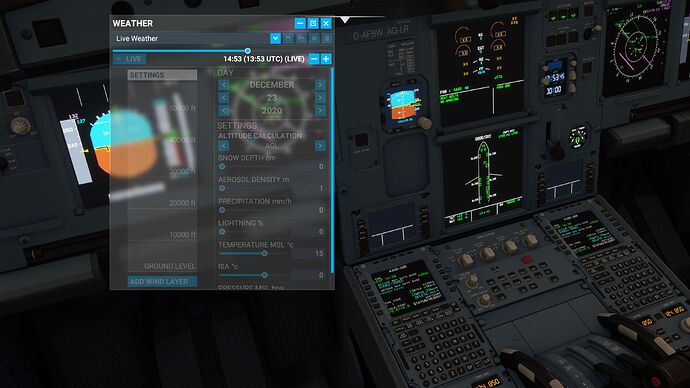 Next issue. After arrival Live weather simulated the reported weather way better. The reported cloudbase was OVC003, so 300 ft above airport elevation. Within the sim, the cloudbase was around 900 ft AGL, which is pretty ok.

So there are still many many errors.

I made a lot of test flights this morning (since live weather is now working at every flights). I was wondering why I already flew through plenty of thick low stratus layers flying bush airplanes low and off airport and you never seem to encounter any. There must be a bias in the area where weather is driven by METAR rather than Meteoblue Model, my guess is that the METAR that should look like fog ends up in cluster of low cumulus rather than homogeneous low stratus.
Now the weather engine seem to be capable of rendering any size of cloud with any density at any given altitude so there should be a fix for matching those METAR reading.

A little screenshot to give us hope: 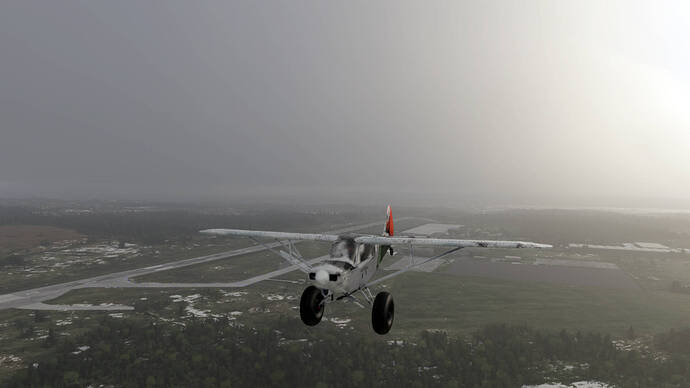 That freezing fog wasn’t made for my bush plane… I thought I had found a real stratus layer at airport, however, after a little scary flight around the airport, I found that it was just a cumulus patch like the other one you encounter around airports.

In your picture there is no visibility issue at all. You have got 9999 visibilty. The sim has no Problem with that kind of weather .

I am talking about real fog, dense. Low clouds are sometimes available, sometimes not.

However fog, real fog, is not simulated. I guess everthing below 4000 m visibility isnt correct.

Fog, whether it is radiation fog or advection fog, is still nothing else than a stratus cloud on the ground with a given density.
Therefore what I was saying is that the engine is already totally capable to reproduce fog (when dense convective cloud hit mountain, you find yourself in very dense fog) but for some reason, the foggy weather in METAR are not translated in adequate stratus layer but I am 100% sure it will be corrected. 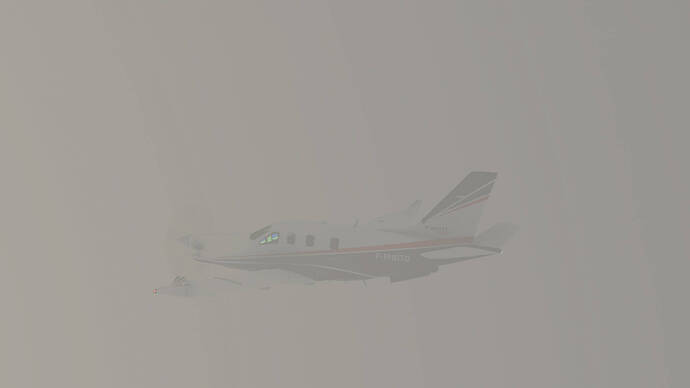 I loaded a flight at KIKK, Sim said “visibility - 1.38nm” but loads almost clear skies. Its not the clear skies bug because it did generate some higher level clouds (very few). This is about 10nm north, completely clear.
I’ve flown round this area for the past few days, weather seemed to be reasonably accurate (Heavy rain/snow/strong wind and low vis). But when there is no clouds with precipitation the sim just can’t get fog right. 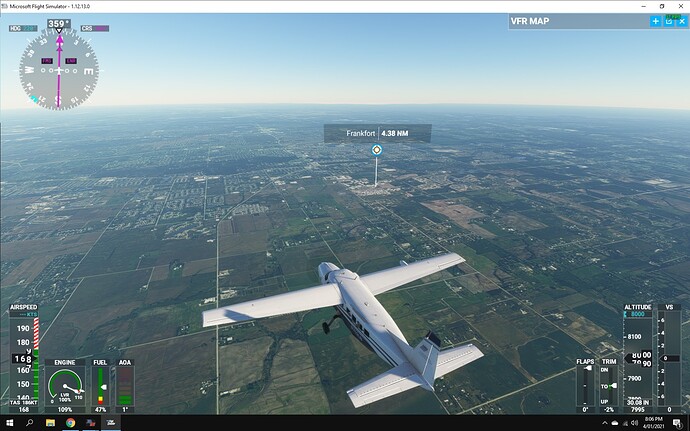 nofog1680×1050 344 KB
And the METAR below showing that there definitely is limited visibility. 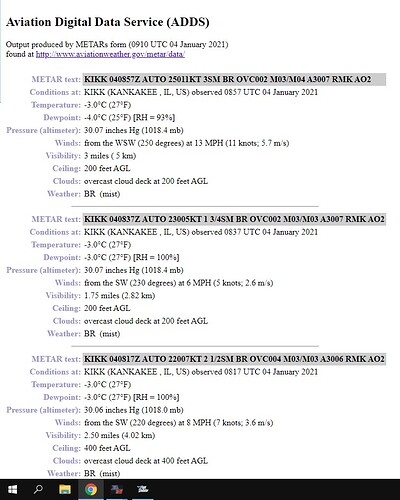 I loaded a flight at KIKK, Sim said “visibility - 1.38nm” but loads almost clear skies. Its not the clear skies bug because it did generate some higher level clouds (very few). This is about 10nm north, completely clear.

I just checked the Meteoblue model for daytime at Kankakee today, the model did not anticipate any low stratus (mist or fog) during daytime, according to the model, low stratus were supposed to form later at the end of the afternoon. At the time of your post, the model was only “seeing” a thin layer of clouds covering less than 25% of the sky between FL280 and FL300, so what you have seen is what the model thought it was not what the METAR said.