Even if there’s no slider as such in weather menu, I would expect sim to atleast match the real visibility as per METAR which it doesn’t do atm. There are regions in which maximum visibility (without rain or fog) doesn’t exceed 6SM more often than not but sim shows crystal clear surroundings.

Can everyone please transfer their votes to the following similar thread because it has way more votes so more chance for things to be fixed:

The current weather system does not allow a visibility below approximately 3000 m (aerosol density 100%) and no low visibility take-offs and or landings are therefore possible. It is possible to put the cloud ceiling on ground level, but precise control of visibility / RVR is unavailable currently. Also “aerosol” sounds fancy but its not very practical it would be better to change it to visibility / RVR with absolute values in meters / km or miles rather than %.

On the latest feedback snapshot it is “under investigation” with a double rising vote trend, so things are looking good. It won’t hurt to push the issue even more though. Just vote on the other thread.

Haze is also a big issue. even when HZ is present in IRL metar, it does not appear in sim. For places in the ME such as DXB or BAH, this is an issue as it looks way way to clear, especially in the summer months. Changing the aerosol value improves this a lot, however I’ve noticed the live weather doesn’t seem to ever change the aerosol value even though, when looking at meteoblues site, i have found they have aerosol maps, these values however have not been put into the sim by the looks of it

This is how the following METAR should look like 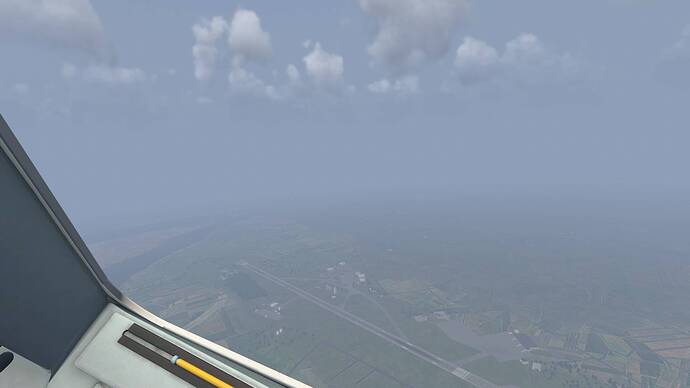 Yes I think you are correct. The aerosol setting is not implemented in real weather (yet). I think I saw a discussion on this shortly after release, can’t find it now though.

Any thoughts that this would be introduced within SU7?

I have recently encountered fogs at EDDM… much more frequently than at other airports around Europe.
Two issues though:
Visibility/ceiling still too “high” even in the most foggy of fogs. Borderline CATII/CATIII conditions, I haven’t encountered ceilings less than 200 ft or indefinite ceilings (vertical visibility - VER VIS).
Some airports get fogs very often, even when there are none IRL and at some airports the fogs are nonexistent even when it’s like the third day in a row with a fog.

I believe that in SU7 when the METARs will get blended more “properly” with Meteoblue model, we’ll get more fogs because of a more precise weather model.
I don’t know if the visibility/ceiling will be different though, I think that will come later in 2022 as Jorg said with the even better weather system.
We’ll see.

I wish to see more to be honest. Almost 4 days in a week, the weather is foggy in EDDM, but whenever I open a flight just to test it, what I see only scattered clouds or some low level clouds and they don’t reduce the visibility really.

Fingers crossed for the SU7 though.

Well I don’t know about you guys but I’ve made my first proper (NO DH) autoland yesterday.
With all its quirks the weather system has, we finally have real deal fogs.

Great for you. As I mostly fly VFR I’m grounded the best part of the year.

I agree, low visibility conditions are finally here, although not a perfect implementation as of now since it’s strictly based on METAR for particular airport. I noticed some abrupt weather changes especially if there are multiple weather stations close to aircraft’s position but nevertheless, a HUGE shout out to Asobo for integrating METAR visibility conditions into live weather.

With all due respect, a “sim” is not supposed to give you the best possible flying conditions, you still have weather presets though.