Hear me out…don’t you think it would seem reasonable to have real-time traffic on the streets in the sim?

Hey there,
Is possibile get the car traffic in real time? Like in the highway?

I think we should add real-time pedestrians at the same time.

This is a great idea actually…

It’d be really smart to use some level of traffic data to determine the amount of AI cars to put on roads.

I don’t know, P3D does a increase based on the time of day, but having more stuff come down via internet is more data usage. That could be an option I guess. I would like to see other things fixed first

I don’t even have traffic on looks ■■■■, especially when some roads aren’t even properly made and then they often don’t drive where the actual road is. So not worth loss of any fps.

Why? How is it unreasonable?

I agree, obviously nothing is ever perfect - roads will continue to be mapped out better, obviously. But live road traffic data is easily accessible to all humans on earth. Implementing into the sim seems as if it would be simple.

“I would like to see other things fixed first” - okay, please list me out, in order, the 20 things you would like see fixed before they make any improvements on the sim…

because it’s a flight simulator - not GTA. How much value is real time traffic really going to add? I want them to fix real time flight traffic before they do anything further with the roads… and what does real time vehicle traffic even mean? Where is the data being pulled from?

it’s the same thing as you playing GTA but complaining about the level of aircraft details in the skies. and even if FS did want to put details on land traffic, imagine the compute power it needs to draw from your PC - which means additional lag

Why? How is it unreasonable?

Because road traffic has nothing to do with flying, and its only purpose in a flight simulator is to add a little movement to roads. What they have now does exactly that.

Real-time cars would add little more than more models to render, more stuff to calculate, more data to download, and another system to potentially break things.

If we’re talking truck sims, though, I’m behind this idea.

When did I say I would rather them not fix real time flight traffic before they do anything further with the roads? Real time vehicle traffic means have traffic resembling the volume and speed of current vehicular traffic on the roads in the simulator. I am obviously not an expert on where data is pulled from - I have no computer or software engineering degree - but if they are able to siphon through paper records to determine altitudes and dimensions of buildings, water towers, cell phone towers, and other various man-made structures to implement a real-world VFR experience, is that not a somewhat similar process? Every person known to man can pull up traffic data on their cell phones at this exact moment on no less than 5 different applications, and there are more - two additional examples are Tom-Tom or Garmin - both of which have real-time GPS hardware devices for your car that delivers real-time traffic. There are already cars on the road now - what would be the significant trouble of grouping and pacing cars to simply another level of adjustable detail?

Can you please explain to me what you mean by the compute power it needs to draw from my PC? Sorry I am not a software engineer. Can you please tell me how much additional lag it would create.

Why does road traffic have nothing to do with flying? When I fly I love looking at the cars below me and the flow of traffic. It has always been incredible to see how the flow of traffic takes on the characteristics of the flow of water, and to watch where and when choke points and slow-downs happen on interstate Highways.

I think it would be an incredible addition to the simulator.

Doesn’t the simulator have vehicles on the roads currently? Would it be that extremely difficult to adjust the traffic volume and speed? How do you know how much additional computational power it would take to implement? Why do I have many different applications on my phone that shows me real-time traffic, but to have those in the most accurate rendering of the world known to man - a stupid idea?

Why would you instantly discount the idea when you don’t even know any of the answers to the questions you’re asking or the statements you’re saying?

It’s really not a bad idea. Road traffic suddenly becomes a very real part of flying when your engine is out and you’re looking at that highway down there real hard. But besides that, traffic is part of what goes into making a believable world in which we fly.

This is what the “wishlist” part of the forum should be for. But since the simulator is half finished, we’re instead on here wishing for things we used to have in past sims, things we’re used to in other video games, and things we saw in the promotional material for Flight Simulator.

From a technical standpoint I don’t see how this has to be a huge hit on performance. Live traffic data could be injected just at load time (rather than continuously), updated infrequently. And it doesn’t have to take a big toll on performance either with optimizations like instancing to make cheap copies of things, and simplified geometry at a distance. But I am wondering what the data source would be. Google’s live traffic is coming from users on their own mobile software. Does Microsoft run something similar through Bing? And a lot of municipalities have their own data sources for this too. Is there a centralized, worldwide data source they can pull from? If Bing already has this data packaged and ready to go, I could see this coming to the simulator in a few years once everything else of higher precendence is taken care of, but otherwise, this is probably going to be well outside the scope of this game’s feature set.

I mean did you see what their official response was when folks asked and voted en masse for trains? “Not a priority”.

Edit:
Well, the data is there in Bing apparently, and it’s not limited to the US. 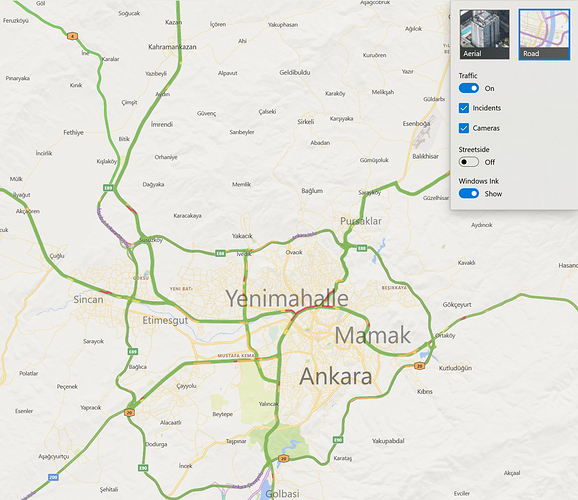 Implementation could be straightforward, setting “traffic density” and “traffic speed” on the sim’s roads in the form of 3D cars and trucks, rather than a colored highlight like on Bing Maps. Even if it’s as simple as making a call to an existing API and setting one variable, it’ll still take years to show up in the sim probably

Skip, thank you for the great response! This is my first post and I realize I should probably put some qualifiers in before throwing out an idea! haha…I have to imagine that Bing Maps, and in some way, shape, or form: Microsoft must easily have access to real time traffic data. Like you’ve stated - it does not have to be amazingly precise, obviously…but it does seem to me like it parallels a large majority of many aspects of how the game is built to begin with - and it’s the only real liaison between flying and the ground.

It all depends on exactly who and when people at Asobo believe it is a priority. I work in Silicon Valley as a Project Manager for an office furniture dealer - so I have personally worked with several of these game studios recently, and you would be amazed at generally-speaking, how small the team of decision-makers is. You are probably correct that “in several years” this may come to fruition…but once things like this are implemented…they are here forever! I’m willing to wait!

I think it’s a decent idea and would add immersion for low-altitude VFR flying. But just the same I think you could make it far more simple by just having a general representation of traffic based on time of day rather than truly live.