I would report any issues and inaccuracies I find via zendesk

I wrote some/many Zendesk bug reports. It is like shovelling coal in a black hole: some days/weeks later you get state “solved”, BUT NOTHING HAPPENS THAT I CAN RECOGNIZE.

It’s the official way to report bugs / make improvement requests. What they do with my feedback it is out of my control.

Fun fact I worked on a program, both managing and assembling( before promotion) the ATR 72 flaps. So cool to see this aircraft mentioned! Would love a good one for this sim.

Yeah I only flew the -600, I did a conversion course for the 42-500 but haven’t flown it in real life. We used to call them flying tractor or Dusty the Crophopper. But they are good planes. Would be noce to see a nice -600 for flight sim. I know there one company making one for X-plane.

I’have done a trial flight one time, there i have flown a Piper Warrior by myself, the most of the flight. And I have flown many times as a passenger, on the right seat with my friend.
How do you compare the MSFS flight model with this from XP11?
I think today is only the turbulence effect in MSFS more realistic. For all the other mentioned effects MSFS has to catch up.
But the graphics are awesome, on some points you can forget that you don’t look at a real life picture.

X-plane has a much better flight model.

Having designed flight models for MS flight sims and x-plane for many years, I definitely disagree.

That’s without even considering the WIP modern MSFS FDM.

I like to agree with you but I can’t, if I fly the Kingair or TBM trying to slow down, endlessly floating in ground effect.

Maybe you are right in the hands of 3rd party developers but what I’ve seen with the default planes so far X-plane has done a better job.

That’s why I’m presently not flying any turboprops and other constant speed prop equipped aircraft in MSFS.

The whole turboprop/propeller simulation is a realism/immersion killer for me, but I’m pretty sure that Asobo is going to considerable rework/improve these major problem areas

i’m only a flight student, but the 3 most remarkable flaws in the sim for me are,

The lack of propeller slipstream, P-factor etc. is handled in this thread. More votes are welcome!

Dear all, I’m surprised this one isn’t even in the wish list yet (correct me if I have overlooked something). For everyone flying propeller driven aircraft, no matter if it is piston or turboprop, this one is important for you. The propeller effects in FS2020 are not realistic or even completely missing. Forget all the eye-candy, this one is a MUST for everyone seriously using this product as a tool for learning how to fly or enhancing their skills. Just to give you some examples before giving…

if I fly the Kingair or TBM trying to slow down, endlessly floating in ground effect

I agree on this. Asobo/Microsoft needs to enhance the FS2020 flight model with braking effect of the propeller. Until they do so, I have produced a work around.
My workaround is to use lift drag and additional drag with flaps and landing gear. In landing approach I reduce throttle, but this alone produces the “floating” effect. As I use flaps 20°, flaps 40° and landing gear I can fake a realistic landing approach with the Beechcraft King Air 350i. The non-realistic part of my fake is that take-off is best without flaps and landing gear should be retracted soon after lift-off.
See my work around on Youtube https://youtu.be/7W8WXb7lTnA
Download my Beechcraft Air King 350i X flight model mod at http://www.andreadrian.de/FS_2020_sailplanes/index.html

Just out of interest, what other sim gives you better VFR experience over the whole world?

I think he wasn’t comparing MSFS with other sims. I somewhat agree with what he @anon85311196 said about the yaw.

As for the ‘view’, I mean the scenery, it’s a constant thing for Asobo and others to keep improving, and they have clearly stated their desire to do so (more obstacle and related data are coming, for example, as announced by CEO Sebastian himself). The world is huge and there will be an infinite number of real world objects and features to add to MSFS, which is what a lot of trigger-happy and impatient people are not realizing yet.

As for Mount Rushmore, @anon85311196, yes may be it’s not there in MSFS yet, and a USA world update has been announced already. So when that happens, check back to see if they added it. Meantime, you can try and see if this helps https://flightsim.to/file/501/mt-rushmore-scenery

Just for fun I will reply this.
I’ve seen someone implement FSX with a Google render.
it was amazing.

Well, not stating a fact for the sheer fact that we are waiting for something to happen would not be post-wise, would it?
I did as well mention that Japan is somehow nice on a vfr point of view.
My main argument here would be how google is able to offer 3d render versus mfs.
I’m not even speaking of trees in random sectors or complete sections of river missing.
I get that city’s are and should be the first places to be adapted to the game but look at my pictures attached.

Don’t get me wrong here, Op wanted real pilots to give their point of view on mfs, and those are mine.
I could go a long way and speak about the lack of church’s that are normally up there in term of landmark, or even how absent the turbulence is when transitionning from a city to a forest and etc.

The truth is, without some very strong fundamental basics, this game is more deceptive than realistic.

Also note that My game settings are maxed out.
Cheers 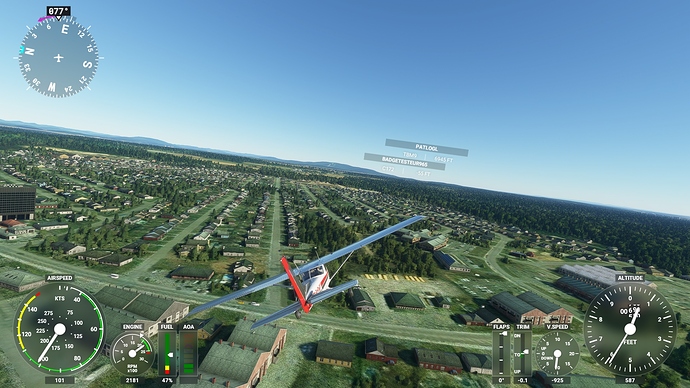 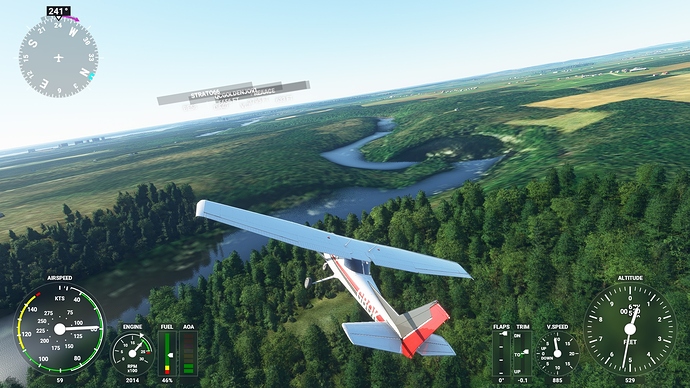 I think it all comes down to expectation.

Well they sold me a Simulator.

It is still fun to fool around with and
I do hope it will be refined and my hopes are in the community… it proved itself many times to enhance the experience of any modable game/simulation.

Having a game with nice trees is not cutting it for me.
cheers.