I candy and arcade play is for revenue, If we started with accurate flight models, fidelity systems, decent maps from one of the biggest map makers on the planet, good comms, working weather, flight planning and buggy bland and boring scenery they would already be bankrupt.

Okay thanks I haven’t noticed that yet in sim, I will look out for it.

Love the GA stuff but not sure about airliners. I have 12000 hours on the A320. Tried the landing challenge into LPMA, Funchal, and crashed lol. I fly that approach at least once a week for real and needless to say don’t crash! Either the real 320 is much easier to fly than the sim or something isn’t quite right!

I can’t comment on the handling of the A320 (I only have about 1.5 hours in an A320 full motion sim), but I’ve flown 3000+ hours in similar size multi-engine Boeing jet aircraft. I’d say that yes, there is a significant difference between the initial 5-10 degrees of roll and and subsequent degrees of roll as far as amount of control input required. The reason: momentum. We’re talking a significant difference in mass between a C172 and an A320 or other “heavy” or “jumbo” designation aircraft. It takes a bigger plane a little bit to get rolling (i.e. a larger but very brief yoke input is necessary to make medium corrections on short final), but once it’s rolling, she’ll bank well.

As far as the A320… I’m still wishing to replicate my “real sim” experience with MSFS and I’ll leave it to the real A320 pilots to explain everything that’s wrong with both the controls and the flight model of that particular AC.

“does appear to be underpowered”
“known mixture bug”
You must be a senior NASA test pilot to be able to make any determination about these flight models. how long Ya been with NASA?

What in H*** are you talking about? You are the one who started this conversation with absolute claims that the X-Cub flight model is complete GARBAGE. The questions you just asked could easily be directed at you.

You were the one who stated that the X-Cub is underpowered. Now that I’ve had the chance to try it in the sim, I agree with you for God’s sake. Yes, it will not take off in 170 feet at full gross weight, so either the engine or aerodynamic model needs work.

I was, however, able to take off in less than 300 feet repeatedly using the exact procedure called out in the r/w POH, so even though the FM can use some work, it’s not the total fail you are claiming.

The mixture bug has been pointed out dozens of times by dozens of users. None of the piston engine models in the sim will develop full takeoff power at full throttle at sea level unless the mixture is leaned. That’s a bug, and is certainly not “news” to anyone who has been involved with this sim prior to the release.

I have several hundred hours in C172’s, Piper Archer III (that I owned), Zodiac SLSA that I was a distributor for & a Alarus 2 seat trainer - similar to a Cherokee. I have flown a few others like a SR20/22 & DA20. I’ve also flown simulators since Sublogic’s FS1 on an Apple II. Here are my conclusions.

I find it more difficult to control simulators than real aircraft. I’ve even had a high end yoke as part of a commercial FAA approved basic flight training device for IFR instruction. Now I use a Saitek yoke & am considering the Honeycomb. So unless you trim the simulator so you don’t have any back pressure on the yoke, it hard to maintain an altitude to within 100 feet or maintain a decent at a fixed rate. I”ve also found it more difficult to slide slip a landing to loose altitude more quickly in the Sim than in real life. But Zodiac SLSA was much harder to maintain the correct decent rate for landings unless it was perfectly trimmed since the stick was so sensitive. I did many go-around in that aircraft the first 50 hrs or so I flew it. Kind of ironic that a sports plane for sports pilots with less hours is much harder to land than a 172 or Archer. So I think any simulator is just OK for teaching the feel of flying, but GREAT at teaching procedures & other non stick & rudder things a pilot mush learn. The climb rates on most of the GA aircraft I’ve flown are OK, so you can practice best climb Vx or Vy but must trim the aircraft to do this since I find it difficult using the yoke only. But if someone learns all the procedures of flying, navigating they will adapt quickly to a real aircraft.

Having said that I LOVE flight simulators & really like FS2020. I’ve done many RNAV, ILS & GPS approaches, holds, procedure turns & really feel FS2020 is a useful tool for IFR flying. I especially like the G3X touch GPS in the X-Cub & some other aircraft because it’s easy to use with a mouse & as fast as in real life. The Garmin 430 that I flew a lot with is very difficult to twist the knobs & the same with the G1000.
One of the most exciting things about FS2020 is the ability to do VRF flying by using a sectional map from Sky Vector web site & just looking out the windows & using your heading indicator & stopwatch to navigate. This is such an important skill to master in flying & now you can do this ANYWHERE in the whole world. I wish I could have 2 monitors for the instruments & out the window, but as you can see in the picture a wide screen monitors works well.
I have maybe 150 hrs in FS2020 over the last 2 months & look forward to the product maturing. It was definitely release prematurely, but I’m OK with that so long as they keep fixing the bugs & adding the missing features.
ENJOY 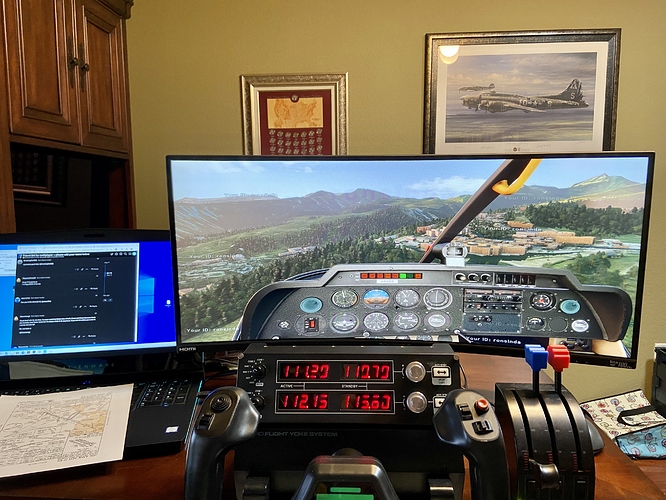 Hello,
The actual sidestick behaves just like a joystick with a very smooth centering mechanism. There is no force feedback. The rate of roll is the same for a given sidestick input up to 67° of bank. As you command rate of roll with the sidestick (not aileron deflection), the rate of roll is the same at 170kt or 300kt for the same input.
The actual a320 is actually quite sensitive, but not overly. So it feels good to fly. The msfs version is just so wrong I can’t even compare to the actual one. If you have x-plane’s flight factor a320, that one feels closer to the real thing. I’m sure flight sim labs will make a good A320 for this sim one day.

One more thing about turbulence modeling:
In actual aircraft, if you are approaching in bumpy wx and you don’t touch your roll controls, you will eventually bank quite a lot to either side and lose the final track. I’ve tried setting 40kt of crosswind with a good gust and 90° away from the steady wind vector and the airplane just yaws left and right. No roll input required to hold it straight like in real world. That’s the main disappointment that I had with MSFS flight dynamics, besides weak adverse yaw and left turning tendencies. I hope they can fix it one day to make it the best sim out there.

Yeah, which is why I’m so annoyed by the fs2020 input controls. They’ve defined a curve to every input that has the potential to be linear, even the throttles! the sidestick on the a320 has the same curve as the 747… the a320 shouldn’t have a curve to begin with!

Totally agree! Too much yaw turbulence instead of rolling.

As for the Honeycomb yoke. I can recommend it!
I started on the saitek (before they got bought out) and then though I would “upgrade” to a thrustmaster warthog, that was not a good experience and would not recommend at all, finally I have the honeycomb.

So far it blows the other two I had out of the water. It seems to be able to fly lots easier, I tend to fly with a lose grip (mostly my thumb and index fingers) and it has been a pleasure to fly.

I am also looking forward to the throttle quadrant set to release in September.

Anyhow, just thought I would reply to your post and give you my input about the honeycomb. Fly safe!

As indicated in my previous message, I’ve only tried the CJ4, King Air and Bonanza…
And as a commercial pilot I’ve received spin training, and have upset recovery every 6 months in a full flight sim, so I think I’m aware of how to enter a spin. It’s not my technique, it’s the flight dynamics of those 3 aircraft.
I haven’t tried the DR400 or the Extra yet.

Multi engined aircraft are never spun intentionally and it’s not even part of the certification. Nobody knows if or how e.g. a CJ4 spins.
Given the stall characteristics of the real King Air, it might be possible that it doesn’t spin.

Btw, I’m not talking about the way to get real aircraft to spin, it’s about how to get the aircraft to spin in MSFS and I’m pretty sure that upset recovery training in any airliner doesn’t include spin entry.

No point feeding the trolls guys

Multi engined aircraft are never spun intentionally and it’s not even part of the certification. Nobody knows if or how e.g. a CJ4 spins.
Given the stall characteristics of the real King Air, it might be possible that it doesn’t spin.

Btw, I’m not talking about the way to get real aircraft to spin, it’s about how to get the aircraft to spin in MSFS and I’m pretty sure that upset recovery training in any airliner doesn’t include spin entry.

You keep talking about things that I never said.
My first posted indicated that the flight dynamics of 3 specific aircraft (CJ4, Bonanza, King Air) were wrong due to the fact that they wouldn´t spin, and I had clearly said that those 3 were the only aircraft that I had tried out so far.
You told me that I was basically wrong due to my technique while referring to the Extra and the DR400. I replied by telling you that ‘‘as a commercial pilot I’ve received spin training, and have upset recovery every 6 months in a full flight sim’’ and you replied by telling me that multi engined aircraft are never spun intentionally and that you doubt that upset recovery training cover spins.

My thoughts exactly. I´ve never flown that type of aircraft in real life, but the performance it has in the sim is obviously out the window. It´s a pretty shell, that´s about it. I hope MSFS will improve it.

If they are airline pilots, they were probably flying the plane the way they fly it in real life. I’d say the goal of most airline pilots is to never need seat-of-the-pants throttle and stick skills!

What controls are you using?

I use the VKB gunfighter joystick. It has a very high resolution and by adding a few springs you can make it feel pretty close to the real sidestick. Maybe it has something to do with joystick sensitivity and response curve too.