Sorry I don’t do sim videos. The only videos I have on youtube is real world flying. While I don’t expect everyone to agree, I do own two aircraft IRL. I also have extensive flight instructor experience in number of aircraft. It give me ability to compare and make my own judgement . This is my recent flight in Bonanza. I hope you enjoy my pic

Realistic induced drag will for sure close the gap somewhat awaiting for Asobo to fix the rest of the prop effects, props spoiling airflow over the wings on multi-engine aircraft when selecting idle is an effect one not even mentioned, this reduces floating substantially during flare in real life.

On most aircraft the thrust available does not intersect the thrust required on the back side. The minimum speed is determined by stall or stability and not lack of thrust. Thereby the stall speed itself reduces with power on especially at full throttle, so I’m not too sure about your full power at stall speed means no vertical speed trick. What stall speed in this case?

Thrust to weight ratio is below 1 on FS2020 aircraft so obviously the vertical speed should be zero when stalled, that said even a stalled wing keeps producing some lift as lift coefficient will not drop immediately to zero when exceeding the critical angle of attack. so the zero vertical speed will not occur exactly at stall speed. 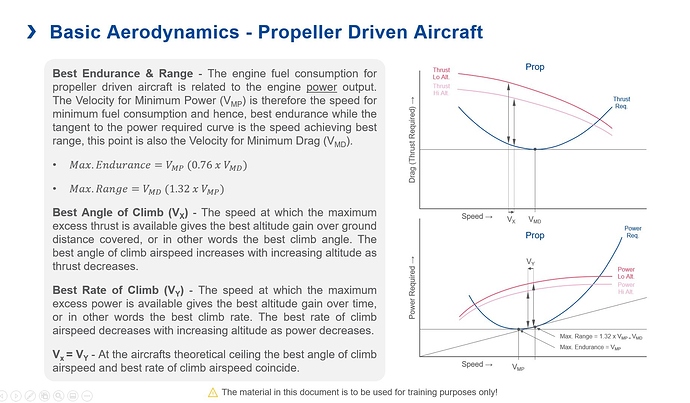 the zero vertical speed will not occur exactly at stall speed.

Hello Nijntje91. I am an armchair pilot and I am new as a configuration file editor. As engineer I normally ask the question: how can I test something? The AOPA diagram gave me a simple test method. If you as a pilot can say: at stall speed the airplane has not vertical speed of 0 fpm, but vertical speed of say 100 fpm (feet per minute), I can tune the configuration file to this value, too.

What stall speed in this case?

The problem is that the stall speed (VS0 for example) is only correct at max. take-off weight, 1g level flight with power off. With power on the stallspeed reduces significantly as the thrust from the propeller has an upward component (“hanging on the prop”) so less lift is required, hence lower angle of attack and lower stall speed.

The thrust available does not intersect the thrust required on the back side of the curve for most aircraft models. This means that even when flying at stall speed, when full power is selected the aircraft is able to accelerate without sacrificing altitude. There is excess available thrust at stall speed.

they really said that? so they are not planning to implement updrafts in thunderstorms because of gamers? that is very sad.

Nijnte91 summed up very well the engine and propeller effects which are of course very noticeable on Taildraggers single-engine propeller engines.
The gyroscopic effect is indeed noticeable when switching to 2 wheels on takeoff. But this effect is also very noticeable during aerobatic figures with a speed close to 0 and the engine at full power: an action of the pilot in yaw or pitch produces a force offset by 90 ° in the direction of rotation of the propeller.
For example in the reversal (I do not know the exact translation of this figure in English, can be stall-turn or hammer-hammer?) See attached picture.
I also point out that dynamic stalls are nonexistent. as a result, it is not possible to make realistic triggered figures. 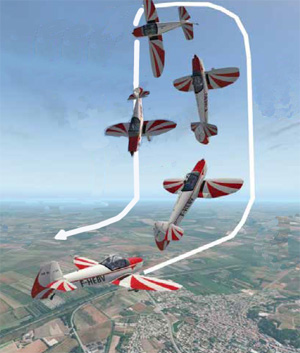 so I watched entire Q&A session and Sebestian has said, that extremly strong updrawfts are currently disabled due to the fact, that most of the users will not be able to understand what is happening but it is planned to be implemented in the future since they will implement the tool wich will display aerodynamic force currently affecting the aircraft. So in summary it looks very promising.

I was about to create a post about that, since you already mentioned it, I second that.

Trying to do the feather and governors check before takeoff on the default MSFS Baron 58 and not working, it won’t go into feather. At 1700RPM we get the governor working but around 1500RPM feather not working. Oil pressure not behaving like it should, manifold pressure not behaving like it should, to sum up not working properly. We get a false sense that things are working but if you fly a twin propeller in real life you will notice that it is not.
Even the mixture controls, when setting fuel flow to altitude on the ground before takeoff when high temperature outside etc, nothing happening on the Baron 58, even in flight the mixture controls do nothing, we barely see the fuel flow moving and cht gauge is sleeping, I wish MSFS default Baron 58 was the classic conventional gauges flight deck rather than the G1000. With the classic at least we’d get a proper sense and feedback from the gauges. I remember tried in flight on the C172 (classic) with the EGT gauge and I got some needle action at 5,000ft, but on the Baron on the ground and in flight nothing accurate and no EGT gauge. MSFS team please bring the classic Baron 58 to MSFS?

Carenado is working on releasing the Seminole to MSFS, at least we’ll have a proper classic cockpit with working systems and gauges.

There is a lot to be worked on regarding MSFS‘s flight dynamic engine but please never assume you‘d be able to „learn to fly‘ in a simulator, neither desktop nor level d.

Some already learned how to fly in real flight schools whatever in the flight schools’s airplanes or sim, and try to reproduce what they learned in MSFS…so trying to get the sim as realistic as possible…in ALL aspects.

Yes, agreed. But I call something only a “simulation” if it “simulates”. In your armchair you can not simulate the forces that work on your body, this “fly with your pants”. But for me this is no excuse for a very wrong and incomplete flight model.

Totally agree. The sims have flaws that lead to bad habits, mostly due to bad drag values and this terribly wrong pitch behaviour when the airfoil changes. In combination it leads to really bad flying techniques.

To be honest even if a sim could recreate real world flight conditions precisely- hundreds of hours of unsupervised flight without an instructor correcting bad habits and pointing out what you are doing wrong would be a very bad idea.

Agree, still a sim should not be missing these fundamentals.

Hello Nijntje91,
the first thing Asobo/Microsoft have to do is to bring in the “braking effect of the propeller” or as you call it the “Propeller drag”. On Wikipedia https://en.wikipedia.org/wiki/Air_brake_(aeronautics) you can read: “Propeller driven aircraft benefit from the natural braking effect of the propeller when the engine is throttled back”.
Until they do so, I have produced a workaround. My workaround is to use lift drag and additional drag with flaps and landing gear. In landing approach I reduce throttle, but this alone produces the “floating” effect. As I use flaps 20°, flaps 40° and landing gear I can fake a realistic landing approach with the Beechcraft King Air 350i. The non-realistic part of my fake is that take-off is best without flaps and landing gear should be retracted soon after lift-off.
See my workaround on Youtube https://youtu.be/7W8WXb7lTnA
Download my Beechcraft Air King 350i X flight model mod at http://www.andreadrian.de/FS_2020_sailplanes/index.html

Forgot to mention, comparing the default MSFS Baron 58 G1000 with the real one, the MFD is missing the engine select key, that’s why we don’t see the EGT and lean display etc, and the PFD not truly accurate either. Also the MAP and RPM should be the dial indications rather than vertical band indications.

Compare my MSFS pic with the real ones below… 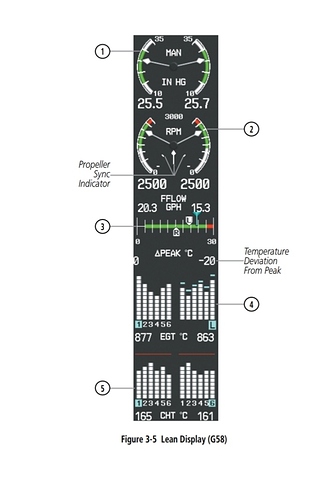 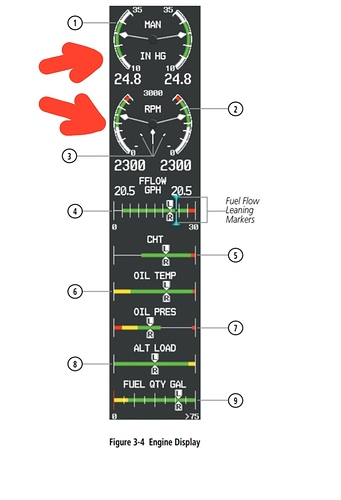 MSFS BE58 in flight 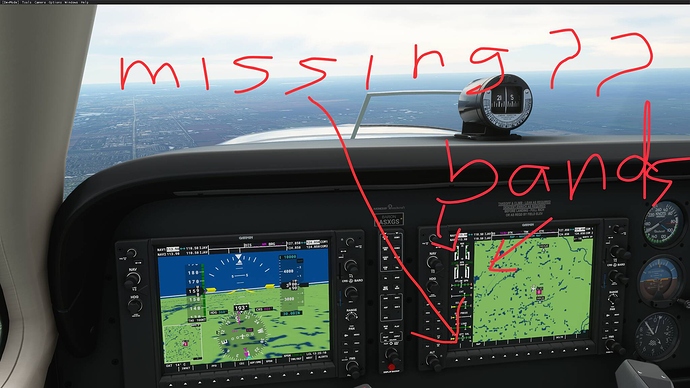 Right now, on the C172, I’m finding myself applying copious amounts of left rudder on takeoff.

Right now, on the C172, I’m finding myself applying copious amounts of left rudder on takeoff.

What you are describing is a slipstream effect from the propeller not a prop drag and yes, that actually works.

Propeller drag depends on the angle of the blade of the prop and that is not yet implemented within the sim.

The Cessna 172 still has no slipstream effect, unless you consider that one tiny hair to the right on the slip indicator slipstream. You can see after take-off there is no rudder required at all to fly coordinated. Also when cycling power between zero and full close to stall speed there is no yaw at all: 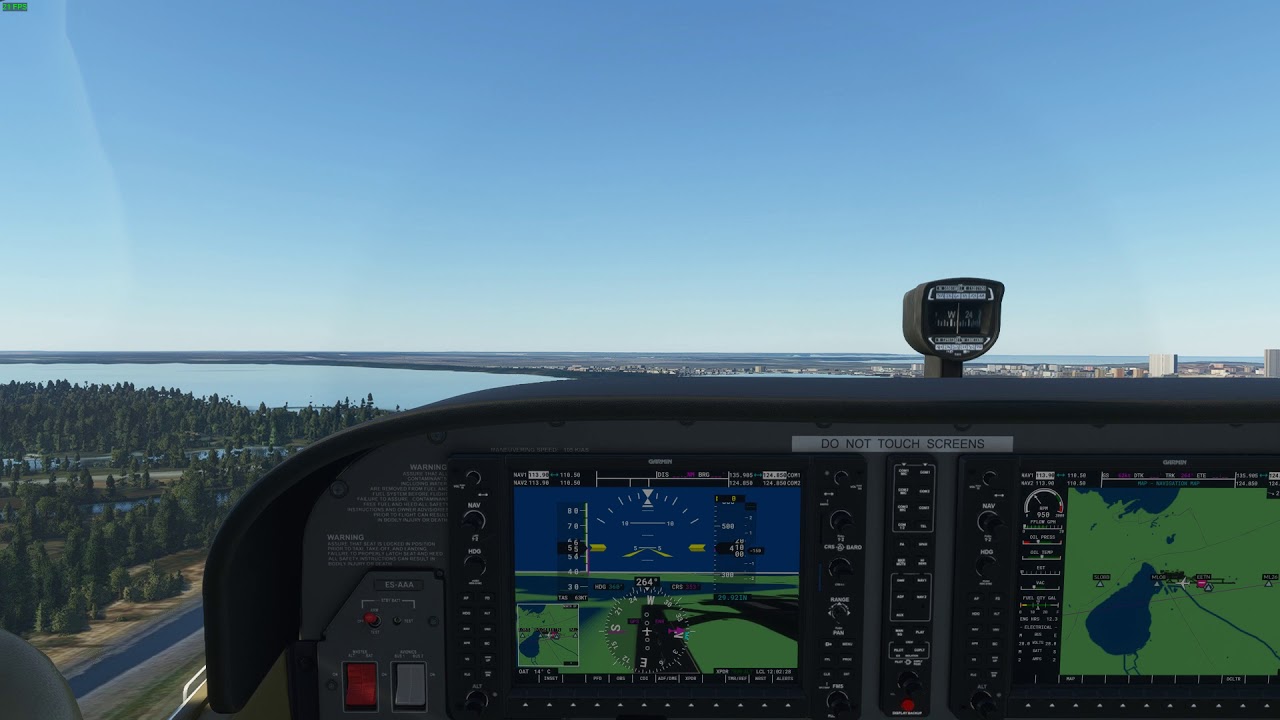 With a variable pitch propeller: When the prop lever is moved forward, the blades flatten… increasing their RPMs and also increasing the frontal area of the blades to the oncoming airflow from the forward movement of the aircraft. This increased frontal area increases total aerodynamic drag on the aircraft, and when the engine power setting is low, you can feel a noticeable aircraft deceleration, even though prop RPM has increased.

The reverse is also true… when the prop level is pulled full back, the blade angle changes, reducing the frontal area of the blades that are being hit by the air from the forward motion of the aircraft. Even though RPMs decrease, at low power settings, you can feel a slight acceleration as the overall aircraft drag is reduced and the aircraft accelerates slightly.

This is the propeller drag that does not seem to be modeled in the simulator. This effect is fairly slight for small, single-engine GA aircraft as the propeller blade angle range is only a couple degrees. It is more evident in small GA twins. If a small GA twin has an engine failure on one said and the prop is just windmilling in the air, that’s like a massive airbrake that will adversely affect controllability and the ability for sustained flight. Prop feathering is required to minimize as much propeller drag as possible.

Most of my time has been in large multi-engine turboprops with FADEC, so I could not control the blade angle in-flight. When the computer decided to make significant blade angle changes automatically, you really felt it in the aircraft as the drag either substantially increased or decreased based on the computer logic deciding what was needed for that phase of flight.