You mean two examples of the Spartan Executive? That’s really a pitty. It is such an icon and a looker

I hope secretely Asobo will bring it as one of their Famous Flyers or some other dev would take the challenge.

The only Spartan Executive I have ever had in a flight sim was the one for FS2004 later ported over to FSX.

I hope the dev is planning updates to this one in future. I think a bump in texture resolution in the cockpit wouldn’t go amiss, especially on the compass faceplate and other gauge faces.

I’d also love to see the cockpit interaction system align with the standard lock system, I.e move things with click and drag, it would make repositioning the trim handle or compass face a lot easier

I now have about 20 hours in the Tiger Moth and can say with confidence that it has become my go-to airplane in the sim. With VR sitting in an open cockpit is simply great. Sure, it’s not the fastest thing in the sky, but for low-and-slow it can’t be beat.

By the way, there hasn’t been mention of it in this thread but there’s one livery with a different colour padding in the cockpit. Thought I’d point this out in case there’s anybody else who likes the lighter cockpit more and wasn’t yet aware that it existed 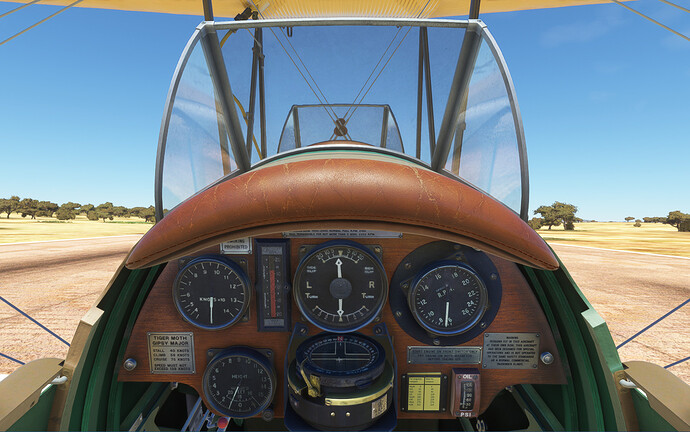 Oh all right, you’ve convinced me!

I’ve been holding off on this since it released as I wasn’t sure I needed another biplane in my hangar, but wow it sure looks like fun. Looking forward to trying it later today.

I wonder if any repainted wants to take a crack at a WW1 “Fokker” livery like the Tiger Moths and Stampes used as on-screen stand-ins for period fighters in The Blue Max?

Bought it a while ago and finally got to fly it a couple times last night. I love it.

But, really, I loved that, too.

Is it possible to patch in sounds without rebuilding/replacing the whole lot? one thing this is badly mssing is some rather overwhelming wind noise in the cockpit…