I’ve been using a reverb G1 pro for a couple of years now, previously more into sim racing but moving back to flight sims.
I’ve been thinking about changing to a Q2. Reasons for this,

I have a Q1 so know it’ light, fairly comfy and overall very user friendly and versatile.
I can even pull in different views into VR for flight plans etc with oculus
Had oculus DK1, 2, CV1, S

Has anyone made this “side step” more than upgrade and can comment on the visuals between the two?

I had g1 and g2, but I chose Quest 2. In fact, the best picture in terms of colors seemed to me in G1. There is a terrible sweet spot in g2, and at 100% openexr devtools is not productive enough. With the advent of the Link Sharpening setting in Quest 2, the image sharpness has become very close to g1 and g2, but thanks to the ability to painlessly reduce the FOV to 0.8, I get an additional increase in frames. On some small planes, such as cessna 152 or bulldog, I get 72 fps and a performance margin of about 30% (I have RTX 3080 and ryzen 5900x). In terms of convenience, the standard Quest 2 strap is very uncomfortable, the helmet presses on the forehead, so be prepared to buy an additional mount on Amazon or Ali (for example, bobovr m2). Otherwise, this is an amazing purchase for a small price.

Yeah heard about the tiny sweet spot on the G2, and know may people that sent theirs back, couple thinking they had a fault even it was that bad!

If the Q2 is somewhat close to the G1 in picture quality, with a slight performance boost i think that will do me!
Again last night had to rip the G1 off my head after an hour, thing was so hot to touch.
My Q1 doesn’t seem to get hot like that, does the Q2 stay relatively cool?

Again last night had to rip the G1 off my head after an hour, thing was so hot to touch.

I never experienced my ReverbG1 getting so hot, probably less than my Quest1. And provided you have a decent cable management it’s almost half the weight. Maybe your unit is somewhat defective.
I would suggest upgrading your gpu first.

I think they are both around the same weight? 500grams
I would love to upgrade my GPU, but i think a worthy upgrade is a 3080, 1080ti still a pretty strong card just old gen. Will await for prices to start getting sensible again before gpu upgrade.
It may be the leathery face insert on the reverb which makes it heat up so much, did cross my mind

Q2 - I didn’t notice any problems with heating. It seems to have a built-in fan, but it is absolutely silent.

Quest2 - you can fly without the cable at all if you want - either with Airlink or Virtual Desktop!

I decided to go a get an Q2, after initially firing it up I must say I was somewhat disappointed at the lack of clarity, particularly distance views, but immediately noticed how much worst the menus etc looked.

Took to google and went through a guide on optimisations, Nvidia control panel, tray tool the works, after doing all the tweaks, fired it back up and…still massively disappointed!!!

Coupled together with a surprising lack of performance, ie same setting was using for the reverb made the oculus stutter badly
Not a patch on the reverbs clarity imo, back in the box to be retuned to store

Use OculusDebugTool from "C:\Program Files\Oculus\Support\oculus-diagnostics\OculusDebugTool.exe ". Disable ASW, and enable Link Sharpening.
Write, will there be any improvements? 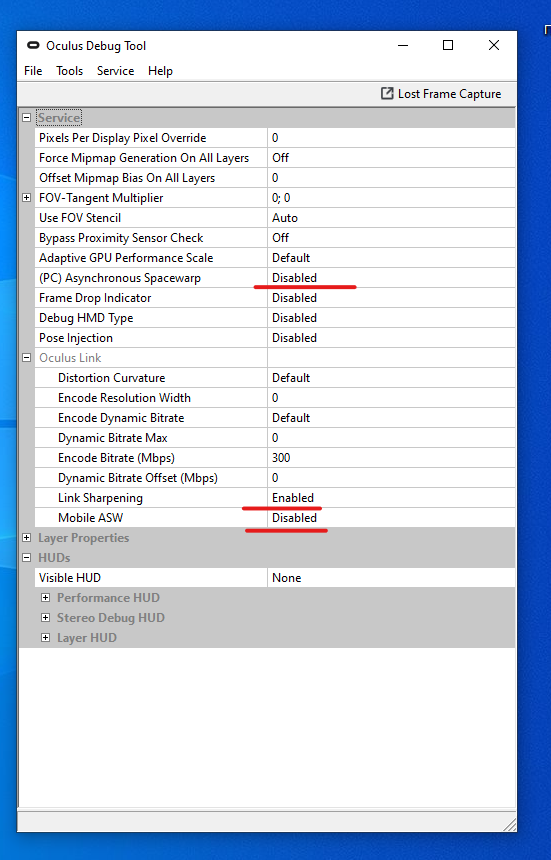 thanks, i will give that a shot later before deciding for sure

I decided to go a get an Q2, after initially firing it up I must say I was somewhat disappointed at the lack of clarity, particularly distance views, but immediately noticed how much worst the menus etc looked.

Well with Q2 you get 1.1mio physical pixels less (per eye) compared to Reverb. And you also get inevitably image quality loss due to data compression. This is what you see.