I’ve got the Weather Force loaded. Seems to provide accurate weather. Anyone out there using this add on?

I use it and think it does a much better job than the default “real weather” MSFS2020 provides. Seems to be much more accurate.

I just got it too, a great improvement. Integrates really well with MSFS.

It will give you more realistic weather most of the time but the amount of issues it has makes it a total crapshoot as to whether it’s better to use broken “live” weather or Weather Force.

My biggest issue is that the in-game surface winds are ALWAYS half of what is reported on the METAR. I’ve brought this up countless times in the REX discord and have only gotten one response from the devs and for unknown reasons thought I was referring to winds aloft.

Winds Aloft, while there, are buggy. They don’t seem to be updated often and only appear when you get above 2500ft and then they are blended in. Not a big deal if flying high, but when you fly VFR at that altitude it is kind of annoying. Also, the winds for your altitude seem to affect the entire sim, so you might have calm surface winds, but if you have 30kt winds aloft you’ll see waves on the surface reflecting the 30kt. Also when tuning into ATIS while in the winds aloft layer you’ll get wind data for your current location and altitude, not the surface.

These are all issues because of the brute-force method of trying to force weather into the game, and I don’t see this improving because Asobo has no intention of opening the weather engine to 3rd parties.

Have you updated your copy of Rex Weather Force 2020 or are you talking about another weahter program. You never have to slew any aircraft for the weather. You have to start it after loading and running the sim. Thats in the Rex manual. It then will take a minute to download and inject the current weather at your location. If you are at a field without Meter readings it will load the closest one. Works very well for me and alot of others. You just stick to your MSFS weather?

Just read your other post. You are talking about UNREAL weather program not Rex Weather Force 2020. Please comment on the program you have and not this wonderful program.

Just read your other post. You are talking about UNREAL weather program not Rex Weather Force 2020. Please comment on the program you have and not this wonderful program.

lol, I’m talking about REX Weather Force. And yes I’m using the current version. In all that text how the hell would you assume I’m talking about Unreal weather? You seem to have me confused with someone who doesn’t know anything about the topic. 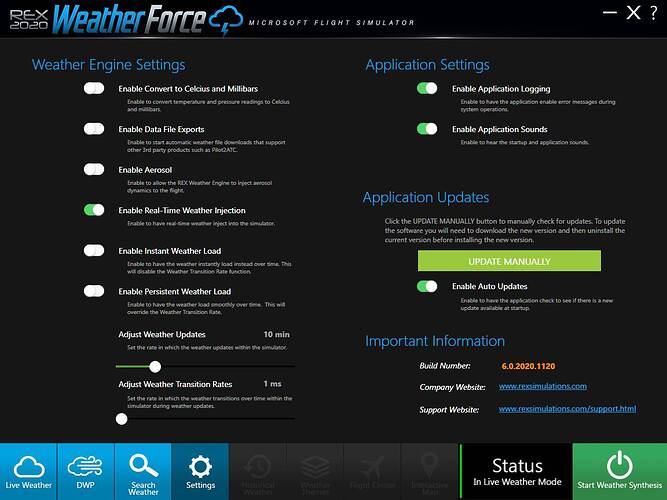 After weather injection, the cloud conditions will load, but the winds, pressure, temp, etc, will not show in the sim until moving away from the starting position, sometimes by only a few feet. This is a known problem. I would make a video showing it to you but you seem easily confused and not worth my time.

ISSUE: Weather Synthesis on Weather Force does not change the winds and temperature readings. SOLUTION: There is a bug within the current build of the simulator

In regards to Unreal weather, for the basic METAR injection, it is a hundred times better than whatever method REX is using, the problem with Unreal weather is the lack of winds aloft data and very basic method of weather rendering.

Thanks for the analysis. I’ll fly with Weather Force for the time being. I’ve used REX for the past three sims and enjoyed the virtual realism even with the inaccuracies at times. Seems to me that the two categories, weather and aircraft are the MSFS 2020 weak points. Can’t wait for the king air, caravan, and cessna 182 or 206 add ons. Soon I will get to begin flying the Citation with addons.

At least you can use real-world weather data for flight planning. 99 times out of 100 any flight planning is thrown out the window when using default “live” weather.

Weather Force should work pretty good if you’re flying faster and higher than my 152.

Totally wrong. Winds and temps don’t update in the aircraft until the aircraft moves. Weather injects just fine otherwise, moving or not.

My biggest issue is that the in-game surface winds are ALWAYS half of what is reported on the METAR.

Never seen this, even from the release version. Winds have always been spot on.

How on earth are you ‘in the know’ about the methods used?

Shills are out in full force tonight.

Totally wrong. Winds and temps don’t update in the aircraft until the aircraft moves. Weather injects just fine otherwise, moving or not.

I mean, REX themselves say it’s an issue. The clouds will inject but wind, temp, etc do not show in-game until moving the aircraft from the starting position. Why are all the weather conditions represented as default clear preset until you move then. 29.92, winds calm, etc until moving. You should let them know that it works so they can remove it from the support part of the website.

Never seen this, even from the release version. Winds have always been spot on.

Here are some examples of the wind being half in-game compared to the METAR. This is always an issue for me regardless of the airport. People not noticing it I think is just most people don’t have much attention to details. 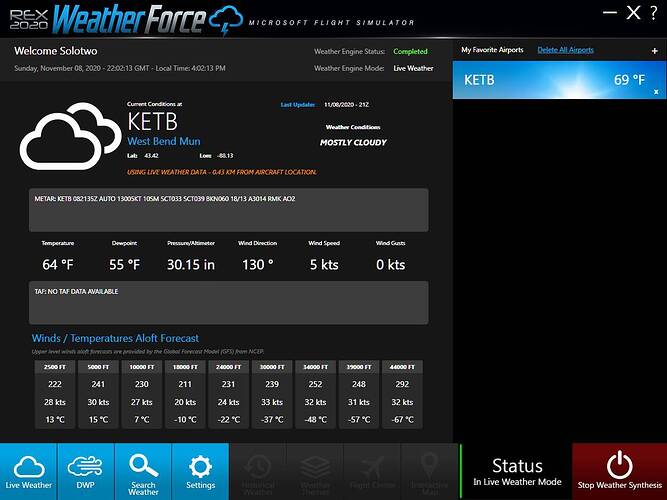 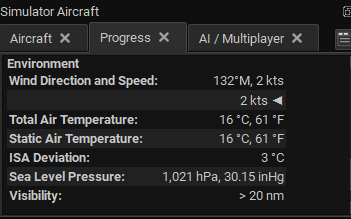 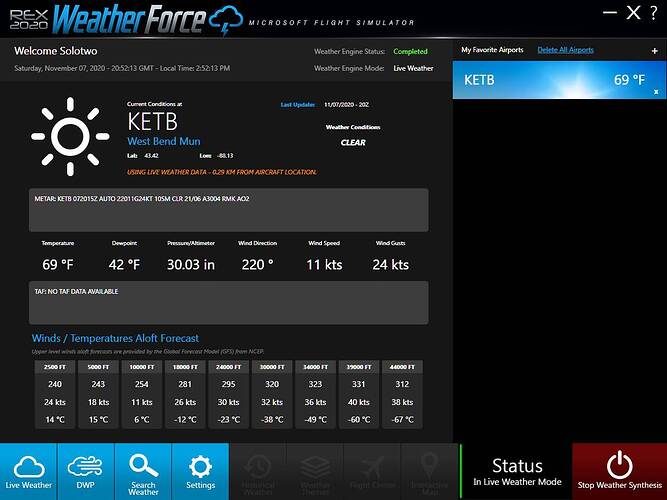 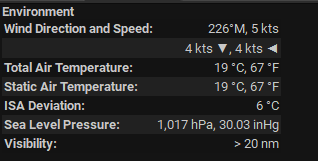 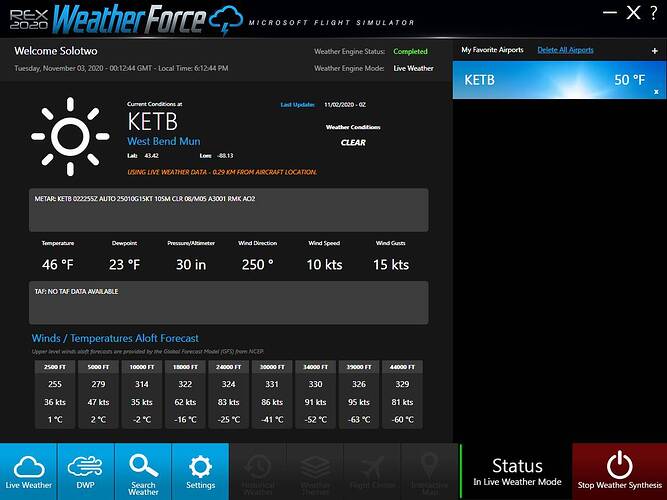 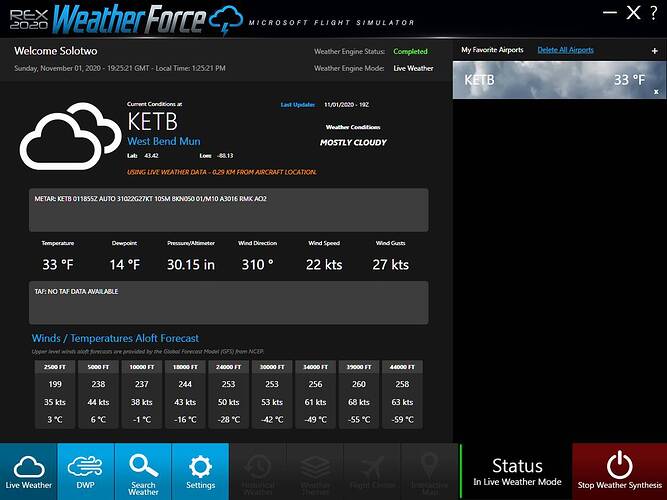 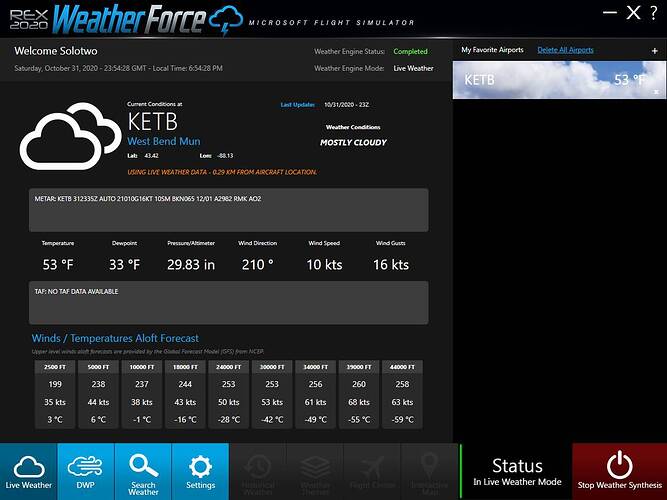 How on earth are you ‘in the know’ about the methods used?

I’ve had discussions with people in the know, but it doesn’t take much common sense to realize it’s a pretty brute force method of injection since there is no SDK development in regards to the weather engine and they have no intention of opening it, sadly.

You seem to have me confused with someone who hasn’t spent way too much time on the forum defending Weather Force and dealing with the awful default “live” weather system. I use Weather Force, and want it to work better and spend time on the official Discord. But if you spend 5 seconds there you will learn about quite a few issues with the software.

Just checked your post history, literally EVERY post is shilling for REX, are you on the payroll? You only spend time here posting about Weather Force, do you get notifications when REX Weather Force is brought up?

You also are very diligent in liking every post of someone complementing Weather Force, a bit odd. EVERY SINGLE one of your likes is about someone praising REX nothing else lol. At least be less obvious.

ORBX is bringing in a Rex Weather plug-in. Might be more accurate than this one, who knows.

But Asobo is not planning on opening the weather engine, so will it be another hack?

It works well in places - the “main problem” is that it is a “station-based” weather - for the station certainly more accurate and more precise than a “forecast” - but the problem is - if the station is not up to date or missing, the weather of the closest station is taken - thus not correct and can deviate completely. above all the weather of the respective station is set for the whole “world” - as long as there is no new update.
I have done a few test flights, as I said, for the respective METAR station certainly correct but in continuous flight rather less accurate and not really what I see from the “window”. this is a “how do I use it” question !!
I find a fluent combination of METAR and forecast (MSFS doesn’t do that anyway ?) is definitely better than sudden weather changes and missing METAR stations - but maybe it can be refined.
and as I noticed the default weatherengine is more varied in terms of clouds, also in distance, because it is not station based therefore the other “weather” is loaded in ahead !
My second problem is, that since the new update the METAR data is old - limping for hours - I have already reinstalled it and deactivated virus scanners etc. unfortunately no improvement !

for me, the fact that REX is just using metar is the biggest issue. yes, weather may be more accurate when you take off compared to default, but then the weather will not change at all until the next metar refresh. i.e. clear skies all the way until the next one reports thunderstoms.

My fps goes down always down when injecting new meatw/weather ?
How can i solve that ???

Really orbx ?
Didn’t know that.
Where can i find some information regarding orbx weather ??

Where are you getting that Environment display from?