I have an Oculus Rift-S and an RTX 3070 GPU, 30GB RAM and an AMD Ryzen 7 3700X 8-Core Processor.
I find that performance on the ground when at an airport is very slow and stutters. What is odd is that take-off runs are generally stutter free and once airborne I get excellent and smooth frame rates.
The intensity of the stuttering on the ground also seems to depend on which aircraft I am flying. The Just Flight Hawk is almost stutter free on the ground however the Just Flight Turbo Arrow is very stuttery. I find similar results with other 3rd party addons such as PMDG and Aerosoft and there does not seem to be a common level of poor performance on the ground. With all aircraft I find in the air performance is very good.

I use Oculus Tray Tool to help with performance and this has made some improvement but not a significant one. I also find that on some days when I use MSFS performance is great and on others it is not. Sometimes a reboot sorts this out.

If anyone can offer some advice on how to resolve the ground stuttering it would be much appreciated. I find that I am using MSFS less and less because of this issue but would like to invest more time into it if these issues were resolved. 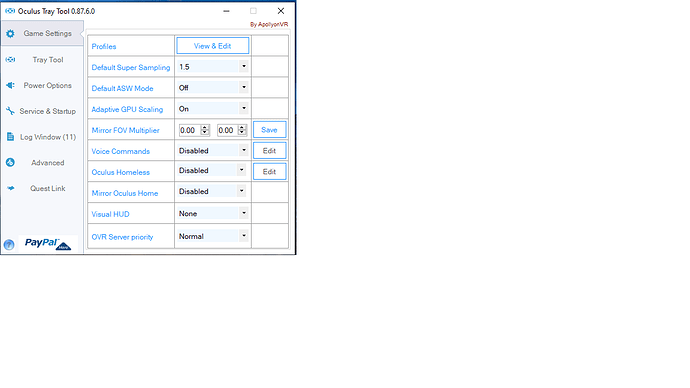 I have exact same issue as you.

Have you tried the nis-scaler tool. Helped a bit, bit stutter still there

Its very frustrating and disappointing that I get poor performance on what I think is a fairly beefy system.
By comparison DCS runs like a dream on my PC, very smooth.

The intermittent performance puts me off using MSFS which is unfortunate as I believe the sim has a lot to offer.

Thanks for the reply…If I figure out how to get acceptable performance I will let you knw.

Hello guys, I had the same problem as you and I managed to solve it in a fast and incredible way. First, I want to tell you that my team is much less inferior than yours. I have an Intel(R) Core™ i5-9600K CPU @ 3.70GHz 3.70 GHz
16 gigabytes of ram
and an evga 1070 ti.
The only thing I did was deny the internet connection to the microsoft flight simulator. And that’s it, everything goes smoothly, super fluid, it works perfectly well for me, at least until they improve performance in that regard.

This solution is a suicide. You get rid of photogrammetry. In this way you are flying in P3D not in FS 2020.

I cannot believe anyone is getting stutter free taxi. I’m on a 3080ti and it’s horrible.

You are right but it is the only thing that has worked for me at the moment and the problem persisted until I tried disconnecting myself completely from the internet, then if I eliminated the problem, I know it is something absurd but it is the only way to make it work smoothly until Let the developers fix it.

I know it’s something absurd but it doesn’t cost anything to try and that way we can let the developers know completely disconnect the internet from your pc and you will see that the mfs2020 will go like a dream duper fluid, the same thing happens to me dcs and other elite dangerous and others are super good for me.

I don’t understand configuring the FOV in OTD, ?

I guess you are using OTT or ODT.
In both there is a option Called FOV.
Watch the image in the first post.

thanks for the info

thanks for the info. My problem regarding the drastic drop in fps according to what I have been able to observe is with the internet connection. I bought the game through steam and when I disconnect the steam from the internet it goes super smoothly but this prevents me from using the game’s features through the internet such as real traffic weather ect. and I don’t know if there is a way to be able to open the cimulator without starting steam, if someone can help me I would appreciate it in advance.