done, but it’s not working 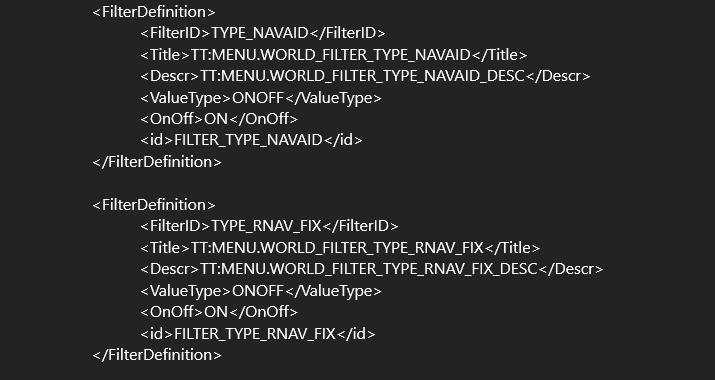 I’mm not sure why that would be.
Mine are working.
Are you on MS Store or Steam?

So am I, which makes it stranger.
When you open the file, did the “save” take, in other words, are these options still as this?

I had the same issue yesterday, I changed one of the navaids attribute to yes, saved the file and the map view showed the ils info on the map on runways. When I exited the sim and re-opened the xml to change the other two nav aid functions to yes and saved the file, both options were still off in the sim map and i could not see waypoints. I had to exit the sim, open and re-save the xml to get these attributes to change to yes in the sim, it worked the second time around.

It does the job. Thank you.

I just wonder why Microsobo can’t make a permanent fix.

Yes that will be it.

Just create a shortcut to the file and amend it after each update, that’s what I do along with resetting the ATC mod.

I saw your post got moved. I’m sure I read yesterday someone reported that their map filters were being saved in the Beta.

Changing settings on world map now saves. Every time I open the map my settings showing Navaids ect. are there.

It works for some, not for others.

I know the settings are stored in a file. Perhaps it might be worth shutting the sim down, delete/renaming that file, then re-launch the Beta, and try again. Perhaps the format has changed, perhaps yours failed to update…that sort of thing.

Thank you so much! This has been driving me crazy and the suggested fix works perfectly so far.

Answer: spend the 10 seconds it takes to switch it on. Not making light of it, really, but, a small thing in comparison to the other upteen things people complain aboutthat has hundreds of votes.

This is my issue with the voting system. Big, long-term bugs that will take years to iron out are at the top and get ALL the attention from the devs, meanwhile, something as simple as this that could probably be fixed in minutes is just left to linger for months/years.