Shadows and water reflections are cut by aircraft body

I guess this is a graphical glitch of some kind. The shadows and reflections on water are cut by aircraft body. If aircraft is not in front of them they are drawn normally. 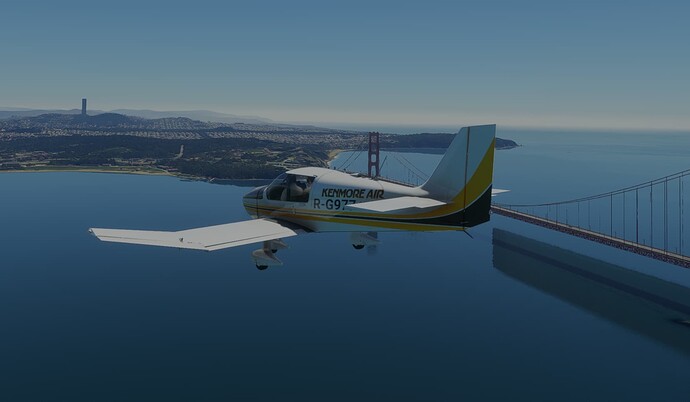 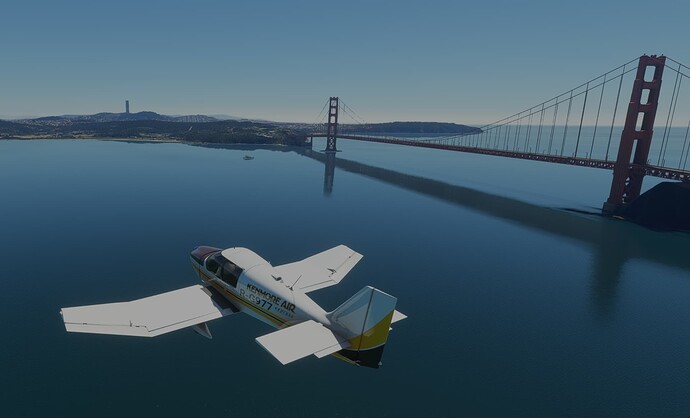 Fly near to coastline or bridges (San Francisco in the example)

Are you using the multi monitor feature?

This is expected with the current screen space reflections implementation.
We need ray tracing in order to have this resolved.

Yes but there´s still a big section between the lower part of the tail and the wheels that should not be disappearing in the first picture. I understand that the fuselage could hide them but not that area. The aircraft body seems to be much bigger than the fuselage itself.

As far as I know the higher the reflection settings the better things are … if this is low that could even be normal.

Oh ok then it’s likely a conflict of some sorts. I flew my Discus all over and around that bridge just the other day without this effect. Textures, shadows and reflections all maxed.

I am not seeing any issue here, this is just how SSR works, that part of the bridge is as they say, not within the screen space, the aircraft is preventing it from rendering so it won’t get reflected. Basically what @MrFuzzy1337 said, we need RT for this so actually work correctly.

I think the issue is quite noticeable. The red portion is visible on the landing gear area, while the yellow is missing below the tail. It may be an issue with the aircraft 3D model itself not with SSR, but something is clearly wrong there. The other reflections, like the coastline on the nose and upper tail areas, are drawn correctly as well. 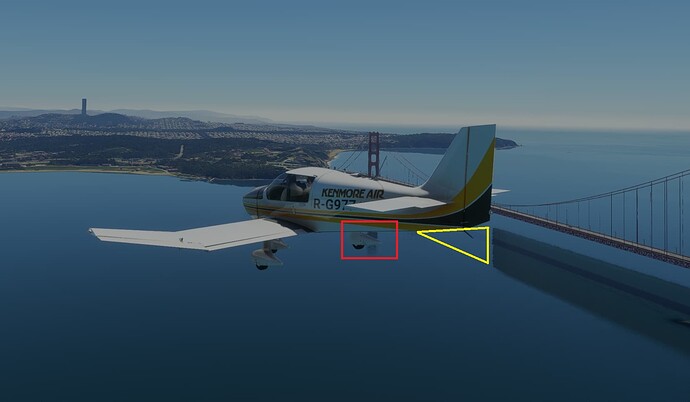 It’s noticeable but that is just how the tech works, you can see the top of the red because it’s physically in view and not covered, part behind the tail is not.

If you pan the camera so the bridge is at top of screen you will see it start to chop the reflection down as it goes off screen.

There is absolutely nothing they can do about it to resolve without using RT, or, rendering what the player can’t see at a huge performance hit.

Another example with a totally different model, in Genoa coast area. In this case the skids area results in a whole portion of the terrain reflection to be missing when camera is below fuselage. 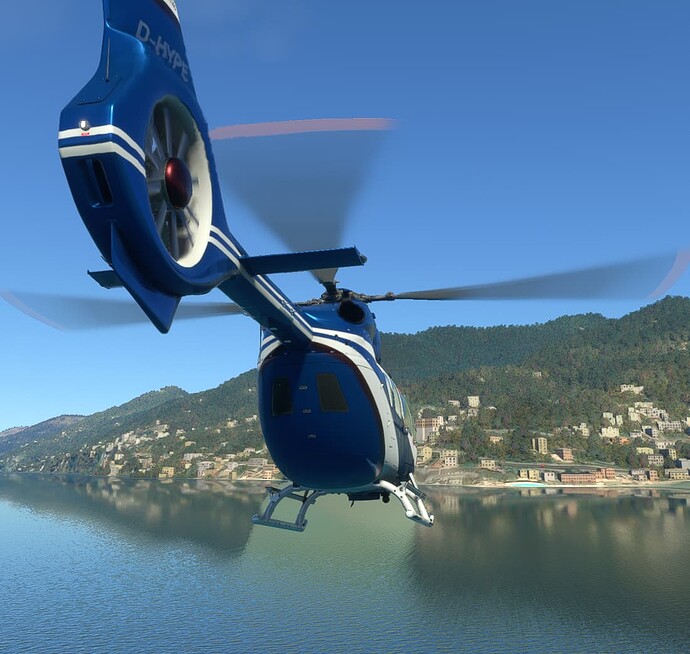 But even if the helicopter is not placed over the reflection area, the reflections on the screen edges are still not rendered completely. 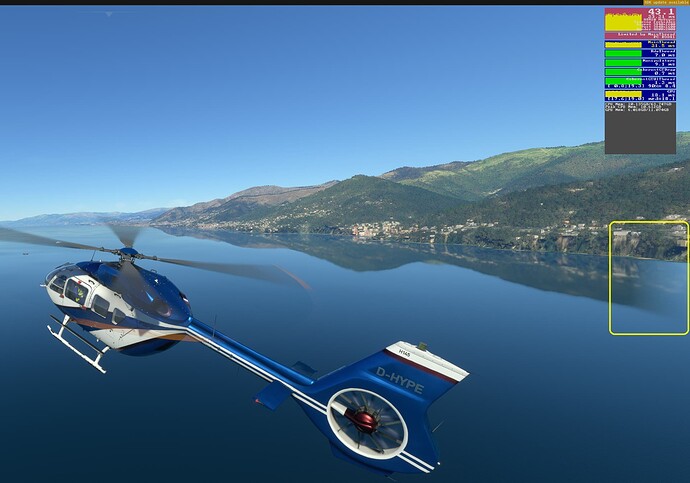 I think this is not working well for multiple reasons, at least on current beta 17. Disabling TAA still produces the same results.

As was said before, this is a technical limitation the devs can do nothing about. On your first picture, not the skid area is responsible for missing reflections, but the helicopters main fuselage. It covers up that part of the coastline and mountains that would be reflected in the water. But because it is missing on screen, the SSR-tech can not create reflections.

You can even see that the missing reflection area is exactly the helicopters fuselage shape mirrored at coastline level.

On your second picture, the devs decided to fade out reflections toward the edge of the screen. This makes sense, as otherwise reflections at the edge will be jagged and cut of.

It may not be beautiful, but thats the best the tech can do without massive performance drawbacks.
The same effect can be seen in other games as well.

As was said multiple times, thats not a bug, nor is their any improvement easily possible, unless the fundamental way reflections are created is changed on cost of performance.

To me this does not explain why the upper parts of the 3D model, like windshield or tail, do not create the issue in both the airplane case or the helicopter case, as seen next. In those pics the relfections are displayed perfectly. If reflections are faded out on the sides of the screen the fadeout is quite excessive too in my opinion. They can just fade the last pixels only, but not a 10% of the image on each side. 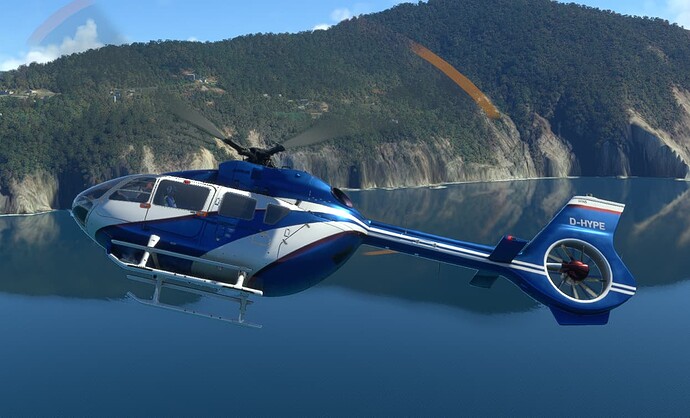 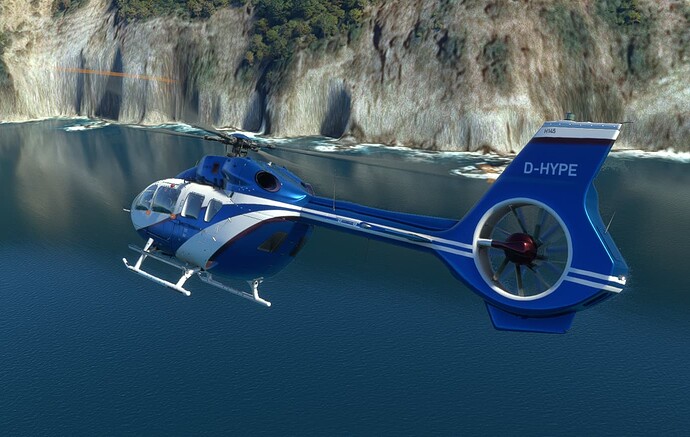 However, what I see is that the reflections are missing because the engine is placing a translucent fuselage shadow shape on top of the terrain reflection itself, making ligth still visible but hidding the reflection. That´s why the error is only reproduced on the lower parts of the 3D model.

This would be a graphical glitch instead of a performance tradeoff I would say.

But it does make sense. I took the liberty to paint around in your screenshots. I’ve marked in red the areas where parts of the helicopter mask the terrain, and in yellow the reflection that this part would create on the water:

As the helicopter itself masks the part where the reflection would be missing, no weird artefacts are visible.

And here the same, only the tail obstructs part of the terrain. And you can even see that there are reflections missing exactly in the expected place in the bottom right corner of the yellow area:# 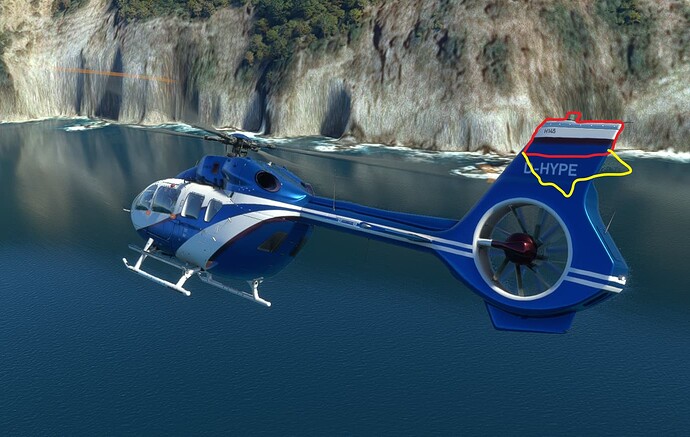 Yes but there´s still a big section between the lower part of the tail and the wheels that should not be disappearing in the first picture. I understand that the fuselage could hide them but not that area.

I understand what you mean but this would not be correct in the case of the helicopter then, even if it may be correct in the case of the bridge for the airplane as you explained. In the helicopter case the reflection on the lower side of the fuselage (marked in red) is created by the upper part of the terrain (marked in yellow), and that terrain portion (which is the source) is not being hidden by the helicopter at any time. However a portion of that terrain is still missing there, between the skids and the rear cargo doors (marked in green). Too many colors here 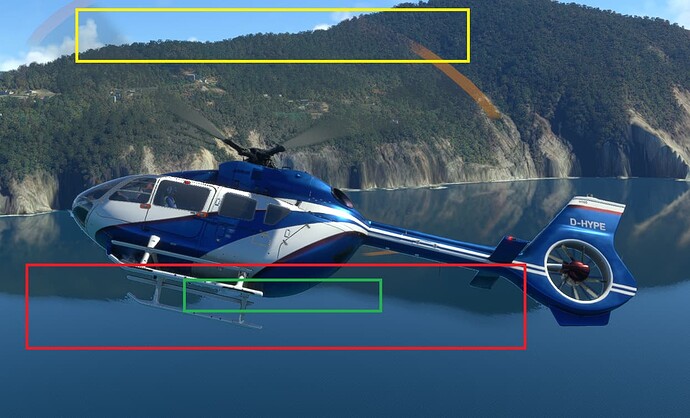 I still think that the aircraft shadow, that would be rendered on the water in all those situations because sun position is on top always, is wrongly rendered here on top of the reflection layer. This is the only thing that matches with your arguments (which I think are correct) and also explains what we see on the pics.

In the next picture that´s clearly visible: the helicopter shadow shape is replicated while the ship one is not. Both objects have shadows and are hidding a part of the terrain behind them. However the ship does not hide the terrain reflection nor morphs its shadow on water but just reproduces its own reflection as well. The only difference is that cam position is still on the top of the ship but is below the helicopter. However if you move cam position closer to sea level the same effect which is seen on the helicopter will be seen on the ship as well. Only the lower parts of the 3D model reproduce the error, not the upper ones. Sun position is almost on top the objects (12am) during the screenshots. 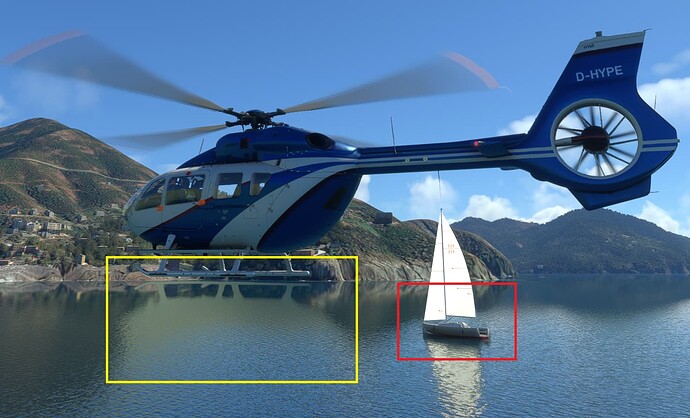 Maybe I´m wrong, sure, but there´s something apparently not consistent here.

“,nothing can be done, it takes ray tracing”

Its true, it was impossible to have shadows before ray tracing, i forgot that…

But the boat does create a reflection cutout, only one thats not visible because the sail hides it: 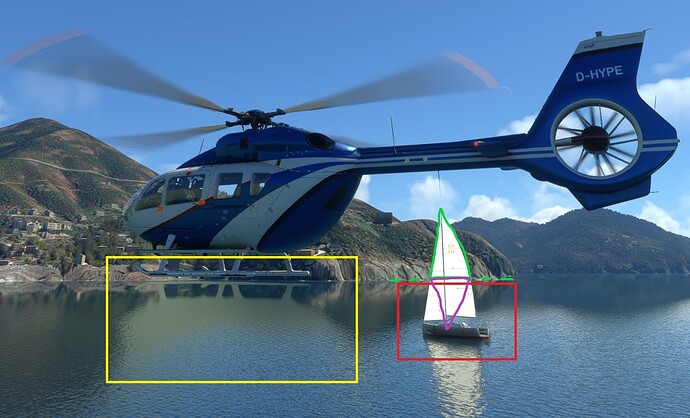 I still think that the aircraft shadow, that would be rendered on the water in all those situations because sun position is on top always, is wrongly rendered here on top of the reflection layer. Only the lower parts of the 3D model reproduce the error, not the upper ones.

But why would you think that, as this picture clearly shows objects at the top of the helicopter that produce no shadow create the effect aswell:

Concerning your first picture: That is a bit strange, but it may just be how the mountain ridge looks like at that angle. Did that missing blob move along with the camera angle?

You may also take a look at these two videos, both of them show all of the mayor issues you named in this thread: 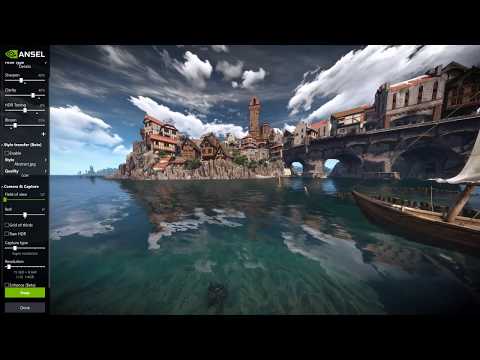 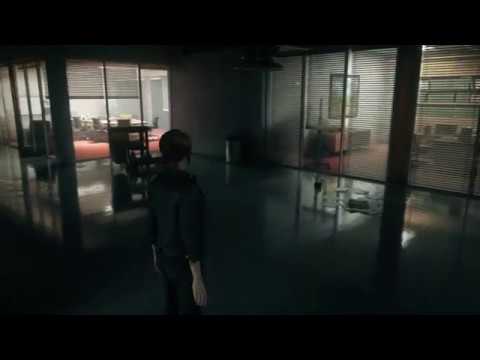 Concerning your first picture: That is a bit strange, but it may just be how the mountain ridge looks like at that angle. Did that missing blob move along with the camera angle?

Yes it moves as helicopter moves even if during all that time the mountain top is still visible. This is one inconsistency, at least apparently, on how SSR method is expected to work (it should still render what is visible).