Should I get a PC - Guidance please

Just hoping to avoid you getting buyers remorse if you buy 11th gen, and 13th gen comes out that is 20% faster for roughly the same price. You would be better investing extra money in the CPU, rather than the GPU, though the sim will benefit from both, most users are CPU bound.

That 11900k is already a generation behind the times, and if you want to run a 4k monitor I would get something more powerful than a 3070 ti.

With your budget I would strongly recommend waiting just a few more months though. Intel and AMD both have new processor generations launching this month, and AMD will have their top gaming performance chips, the 7800X 3D and 7950X 3D, probably launching around Jan-Mar. Based on the insane performance of the current 5800X 3D in MSFS these are likely going to offer a massive increase in performance over that 11900k in your spec sheet and will give your system the best possible longevity before upgrading. Nvidia and AMD both have new graphics card series coming in the next two months as well.

If you’re after decent performance vs cost and don’t want to wait, then now is an ‘ok’ time to buy I guess as prices for current generation stuff are dropping, but I would definitely go AMD 5800X 3D or Intel 12900k at least.

He could go with a 12th gen CPU and the 13th will most likely be the same socket so he can upgrade that later if needed. Right now the thing to wait for is the NVIDIA 4000 release.

Something along these lines…? 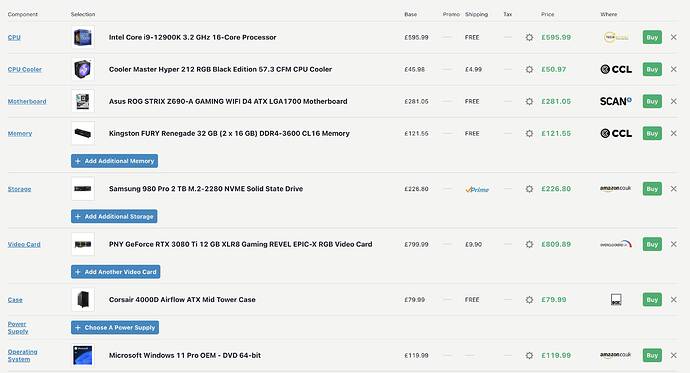 If i’m going to do it, it will be before Christmas - more likely early October.

I agree with the others, a couple of months could make quite a difference.

If you want to have something to do in the meantime buy the FI Spitfire on the xbox now. It’s fantastic, works great on xbox, and is fully functional (except for the visuals on the cannons, marketplace rules). You might have so much fun you forget about the pc for a few weeks.

If you are on a budget, i would not get the higest core count cpu but rather down one tear. I think with 12700k you will get the same performance in MSFS. Unless you run a lot of background apps that hammers the CPU (and even then having more ram is better, background tasks usually don’t consume a lot of cpu). 12700k is much better at being power efficient and running cooler (having to spend less for a cooler) and it has the same number of performance cores. MSFS still cannot utilise multiple cores evenly, so no point having more cores unless you do other productivity tasks. May be checkout the parts reviews by GamersNexus/hardware unboxed. Keep in mind that thess channels when it comes to GPU usually don’t put too much stress on vram, and that’s ok for normal gaming, but for MSFS having more VRAM is a good thing that you will appreciate later, ask any 3090 users. I frequently run into vram limits in my RTX3080 10GB in addon sceneries like Brussels, Renton with 4k ultra. And having more ram also helps in MSFS.

And if you want the best CPU currently available for MSFS, get a amd system with 5800x3d. Period. But that platform is at end of life, so no more upgrade path.

Thats a pretty solid idea, i’ll get the Spitfire and go with it.

I’ll shelve this idea and set a reminder for early November then see whats cooking. I think no matter what hardware I get, it will always be a case of “new stuff coming in a short while” as thats the nature of the beast so at some point I’ll just have to dive in.

Heck, get all the flyingiron planes if you are into warbirds, they are all brilliant. Don’t know if the f6f is available at marketplace yet.

Edit: wait, you are on Xbox, that means only marketplace options, and that means no weapons modelled. Not even modelled. Bummer.

Another option to consider for your “should I get a PC” question is choice. With the console route, you are limited in what you can enjoy from a flight simulation perspective. That includes aircraft options, add-ons, mods, etc that may not be available on console that are on PC.

Also, with the PC route, you have a choice to try other simulator platforms that are not available on console either. Console is convenient and easy to “maintain”. A PC will provide you more options and flexibility at the possible expense of needing to manage your setups with more detail than you would on a console.

I would not buy 2666Mhz RAM. It will have a bad impact on performance and it won’t match the rest of your configuration. Get at least 3200mhz RAM with good latency, like CL14. The sweet spot could be 3600Mhz or even 4000Mhz if you have the budget. 2666Mhz RAM is for basic entry level PCs, like to browse the internet, not for gaming.

I would also get a good thermal paste, like Thermal Grizzly Kryonaut, MasterGel, GC Extreme, Noctua or even MX-4. It makes a big difference. The water cooler comes with a decent thermal paste, but I would never buy ‘industrial / standard’ thermal paste to use on my CPU. In general, they are pretty bad and might make your water cooler perform like a mid tier air cooler.

If you are not overclocking your CPU, and your CPU is locked, I would go with a Noctua air cooler. Water cooler has its perks, but you need to have some experience to avoid air in the tubes, where and how to place the radiator, etc., and love to tune things. For a beginner, I would go with a good air cooler, especially if your CPU is locked, as it seems. Then on your second build, or down the line, you can buy an unlocked CPU and a water cooler, even a custom one.

were you looking at the latest entry in my quest here…

I would go with an air cooler and would prefer to not to overclock, certainly not as a first build

Hyper 212 may not be sufficient for the 12900k cpu. That chip is known to run hot. You can check my previous post about CPU, but basically you can go down one tier to 12700k and that will save you money in coolers and the cpu itself while having little to no perf impact in the sim. Both 12900k and 12700k have 8 p cores (used for gaming like tasks), 12900k has 8 e cores as well where 12700k has 4 of those. These are efficiency cores used for light tasks. Unless you have other workloads which can utilise the whole 16 cores of 12900k, there is no point getting it.

Thanks, this is the type of info i seek

So we are now at this point… 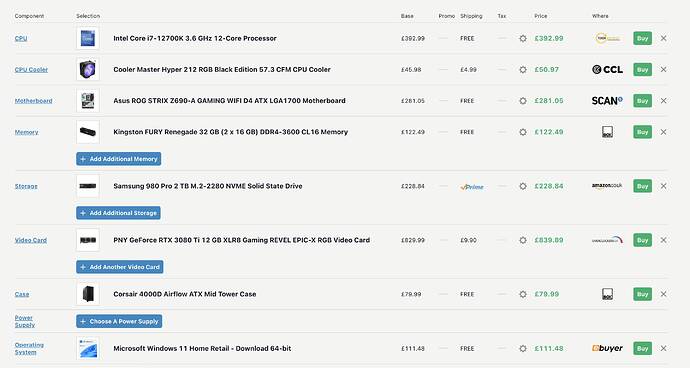 Well, wait a couple days for the 4000s to be announced and see the current 3000s cards drop even further.

If you’re not in a rush, for price per value, you’re better off waiting for the first quarter of next year, when the 4070, 4060, etc, are released.

I am an owner of the 3060 Ti myself. I bought it this year in spring, knowing that the 4000 series was coming out. But I really needed a new computer for my work, so I couldn’t wait.

From a price per value perspective though, unless the price of a new 3000 series card is 1/3 off the MRSP price, the corresponding 4000 series card will give you much better value - at this point, I would only buy a 3000 series card if the price is 2/3 of the MRSP price. So if you’re not after the latest and greatest hardware, just wait until Q1 of next year. I suspect the 4070 and 4060 will be released then and they will probably provide very good value & performance for the money you pay.

Also, MSFS is almost completely different game on PC. On PC, you get access to the entire flightsim.to add-on library, and that is a huge difference maker. Plus you get the Fenix A320, AIG, GSX, etc, and so many other add-ons that aren’t available for X-Box. You also get access to the VATSIM network, which is another huge plus for PC users. The value of MSFS goes up astronomically on PC, IMO, based on the extra add-ons and features that PC users get access to.

My MSFS journey started with a Series S, then Series X, followed by high end i9 12900, RTX3080ti…. in order to fly VR with a HP Reverb G2. Visuals do improve over Series X and I’m able to set most setting to Ultra, although I only fly VR now unless I’m using YouTube as a tutorial. What I can say is PC opens up many free addons such as power lines, cable cars etc., (take a look at flightsim.to). If your not interested in trading the immersion of VR with the reduction of visuals, a PC opens up the opportunity for eyetracking (see Simhangers channel on YouTube)

Yup, not to mention PC opens up VATSIM, AIG, GSX, Fenix A320, etc. So much more stuff you can do with a PC.

Thanks, i have said I’ll shelve the build until early November to see what happens, maybe the 4080 will be on the shelves then. As its such a large part of a build I think getting a high end GPU at the start makes sense ?

Edit: Oop, I just saw your response above.