To better support collaboration and sharing of experiences, can we have a private area of the forums set up for beta testers to be able to share experiences and issues to better support bug/feedback logging through the Feedback Hub?

how about to put your energy into testing and giving feedback about it the hub, then have again an endless discussion. when you dont like it, dont sign up for testing. 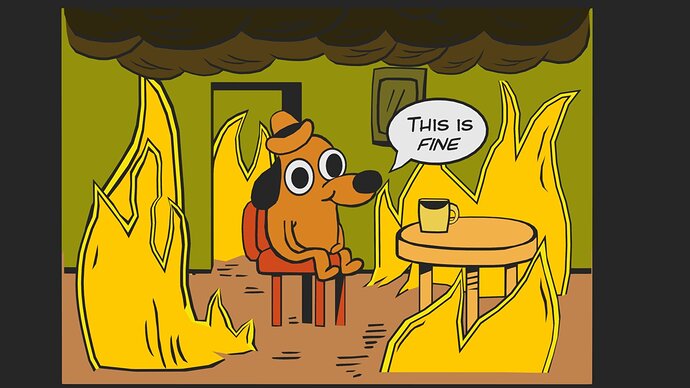 That’s fair. Have been doing that though, but wanted to share my experience on this as well.

Did you just break the NDA?

And I found out why… Hold on… The name is translated!

I’m using a French version of Windows, so “Flight Simulator” appears in the “Apps” list but under a French translation: “Simulateur de vol” this is literally the translation of “Flight simulator” (should not have been translated, because it’s the name of the product, and it appears as “Flight Simulator” everywhere else in Windows, well that’s probably an error by the Feedback Hub, or Localization team)

I am able to confirm that this is indeed the right category, because when I want to display all feedback items logged under this category, I can see existing feedback items: 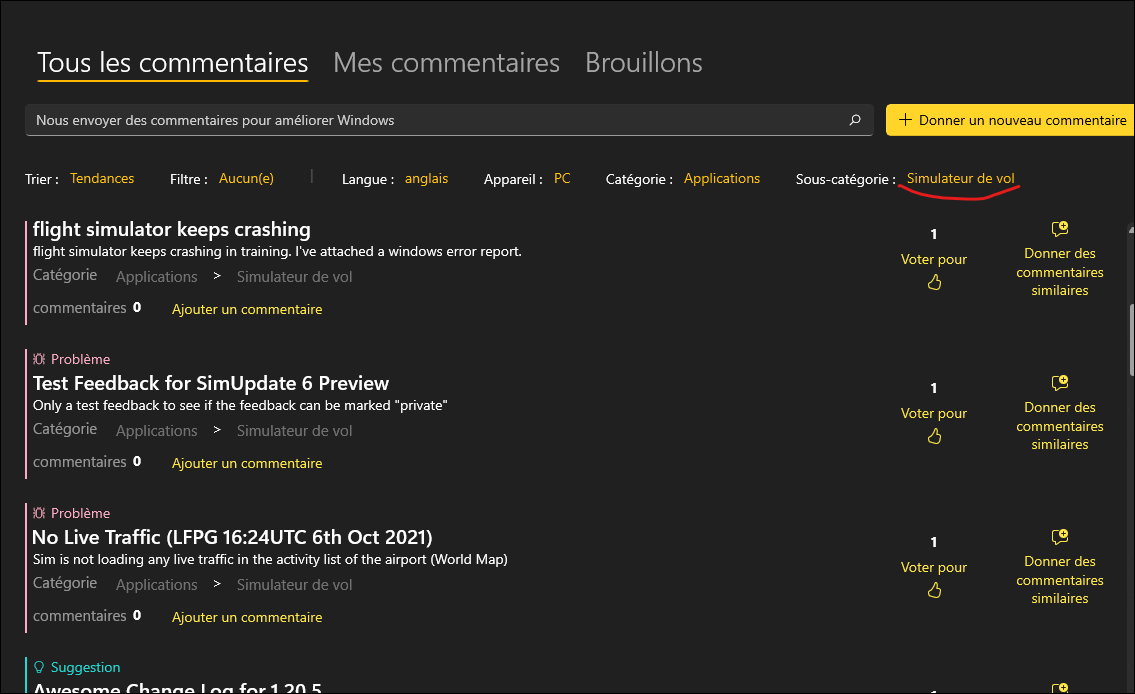 By the way, if needed, you can find the apps that Feedback Hub detected in this file, that’s how I was able to confirm that the feedback hub really detected MSFS on my computer, and that’s what made me keep looking further and eventually led me to find this translation story afterwards.

Relevant sample from this file on my computer:

and can see someone commented and confirmed that they had the bug and upvoted it.

It was me. =) But one biggest issue - NO REFRESH ability

Same, to refresh I click the Home button and then click Feedback again to get the updates.

Hi @Jummivana ! I don’t have any popup for enroll in the beta

. In the last I was automatically added

That was closed days ago…

How about you stop attempting to gatekeep the experience of other people who, let me remind you, are volunteering their time for no reward to try making this sim better.

And there is no way to enroll ?!?!? In the previous beta i enrolled one day later with no issue and also in this week I never saw the popup for enroll (I already was in last flight)

How about to stick to the rules for this beta? When you dont like it, then dont test and deal with it. No one force you to sign up for beta testing. try to understand it.

When MS makes decision that harm the beta process - and lets make no mistake not having place to discuss the beta ABSOLUTELY harms the process - then IMHO people have a duty to point that out.

Ands similarly lets point out that no-one is breaking the rules here - if anyone was I’m very sure the mods would be dealing with it - but similarly no-one was told in advance there would be no beta section in fact we didn’tfind out till after the beta was actually released.

OK, thanks for your help with this @Jummivana. I stand corrected on the feedback hub - different to the forums of course, and not fulfilling some of the collaboration things you helpfully added to my other thread, but actually, having played around with this for a bit now, it seems to enable us to do quite a lot in terms of finding and commenting on others experiences

you can also opt out for testing, when you dont like the rules and process . so deal with it.

Do you think we signed up for this because we don’t want to contribute? Many of us have put A LOT of hours into earlier betas with the intention to improve the product. Go and compare with the closed forums from the previous testing and you will see that most threads have many replies and good discussions. Then look at Feedback Hub and see that all of the topics have “Comments: 0”.

i dont care about history. so i filled out 3 bugs in xbox feedback loop. so what ? when you dont like it, opt out.

Let’s not argue about which methods have been better - there is a thread to upvote and discuss that further here. Please keep it civil: [SU6 Beta] Can we have a private forum area for beta testers to share experiences

That was the problem, thanks a lot. I can confirm that “Flight Simulator” is also being translated to my Windows language, and quite oddly, it seems to be the only application/game that is not using its original title in the Feedback Hub for some reason.

@Jummivana It might help to acknowledge this error in the official instructions, as that post will likely get lost in this big topic.