In simple terms: The accelerations that your smartphone would measure if it were mounted to the aircraft!

Asobo have to a certain degree acknowledged that by implementing a variable called SEMIBODY LOADFACTOR X …Y …Z in FS2020’s Simconnect interface. To the best of my knowledge this variable was neither present in P3D nor FSX nor any previous version.

I am writing this, to raise awareness that these variables are at the very core of any add-on that deals with the flight dynamics of the aircraft and need to be implemented for 3rd parties to access.

Especially in the light of there being one of them implemented correctly already and the others at least having been set up for (hopefully) future use I am wondering why those X and Z variables were not supported from the start. Here’s an excerpt from the SDK documentation. 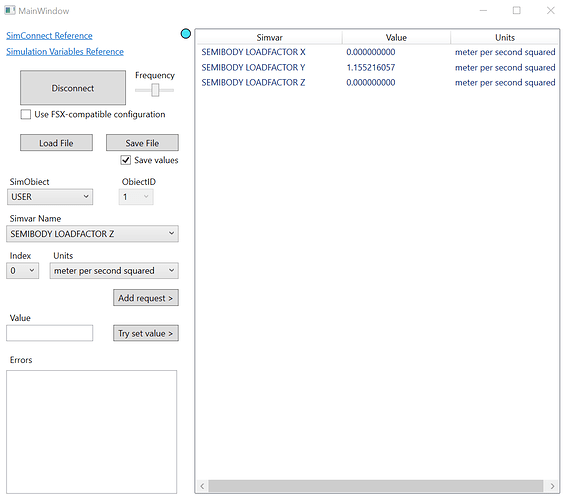 Can anyone from Asobo comment as to whether/when these variables will be supported?

Thanks a lot for bringing this topic up.
As an owner of a DIY motion simulator I strongly support your request.

As an active member of the DIY motion sim community I would deeply appreciate support data that drives sophisticated motion cueing software, while I appreciate motion simulation and associated haptics is somewhat niche, it is also the pinnacle of innovation and investment by flight sim enthusiasts, and a public showcase opportunity for MSFS2020, as any online posts by motion sim community garners a lot of public attention.

I agree… a great sim deserves an accurate motion to drive sim platforms. I am hopeful we can all achieve this soon