I appreciate the reply… I know it is a difficult task and thanks for the effort. hopefully you guys can work something out

That seems extremely difficult and unpredictable in terms of tuning.

On the flip side, it makes me all the more appreciative of the efforts you (and other) 3rd party devs put into making these airplanes feel right.

There is also an upside to that approach: it is layman-friendly and helped revive the freeware community, which I personally love (and started in). But for those that know the science, it would be good to have the option to use the tables.

Anyway, off to cruise in the Floatiak!

Anyway, off to cruise in the Floatiak!

There are three things left to do:

If everything is fine, first half of September.

Hopefully the sim itself is in order by September…

Newbie question, but does anyone know what the small rectangle instrument on the dashboard is called or what it’s used for? Below the compass but above the Garmin displays - it has lights and appears to have a cross sometimes.

I think that is the angle of attack (AOA) indicator and it helps when on short final and landing to see the cross indicator lights as that’s indicative of a good angle of attack, i.e., nose up/nose down orientation. I may be wrong on this but others will correct me and I saw a post or two about it a while back but couldn’t find it with a quick search (not a lengthy search though).

Try searching this thread. This has been asked before and information provided for this unit including the real manual.

Mind is 404 pages… found the Pilot manual with some googling

saying it is VERY detailed doesn’t give it justice…

@SiRRiPPERORiG iRRiPPERORiG thanks for the heads up above, yep MSFS still too game-ish, I bet for you guys is hard work to keep up, I think they should just nail the actual simulation and then do anything else that isn’t game breaking at least devs would be in a better position. I fly an aircraft with similar characteristics to your Zenith, you did an amazing job with it, unlike the Fox2 the flaperons are more realistic in behavior.

I absolutely love the Kodiak, especially since I made the transition to VR. The Kodiak is perfect for me because I like to use OnAir to generate short-haul missions, and that way I get to fly in and out of strips I would never have considered on my own. Now I hate to bring this up because so many things about the Kodiak are just fantastic, but I have noticed something odd when on finals. Typically I aim for about 80-85 knots on finals but sometimes I find myself getting a little high and so I’ll gradually come back on the power. At some point even though my speed is quite constant as I reach a certain power setting, man, the aircraft suddenly pitches down and drops like a rock. The converse is also true, as now of course I’m inputting on the power and pulling back a little and then suddenly up up we go. It just seems to me that at some point, perhaps at a certain power/speed combination the reaction of the aircraft is just too aggressive. Anyone else notice this? Could just my flying of course!

I just noticed this. The airspeed tens place is formatting below the hundreds place and outside the window.

It also appear the OAT is missing from the upper left field. 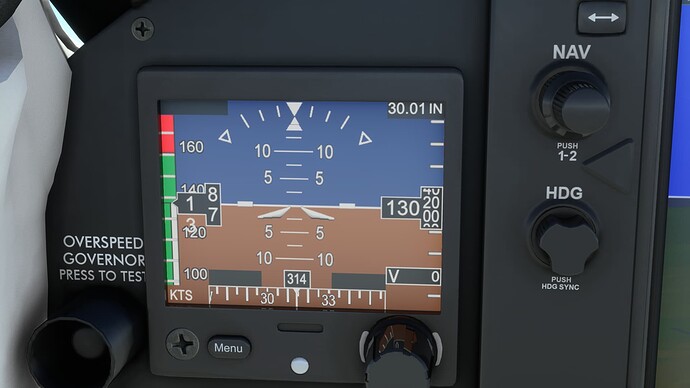 Yep. Just came here to report this but you beat me to it.

I would like to know when and if Simworks is going to model the engine inlet bypass.
Anyone?
Thanks

The function is there already.

Mark Brown has test-flown the (virtual) Kodiak along with other pilots from the factory.

many thanks, love the Kodiak

Also, we are already working with Aviation sans Frontiéres on some add-ons that will go 100% towards them and one is already out at ORBX.