Yeah, I was expecting an update for the Mooney yesterday but it didn’t come. Taking too long.

Same here. I have just flown mooney and WACO without any issues.
For the OP, you state the aircraft are unflyable, yet you fail to provide any explanation.

The problem is the engine dies when idle. It’s a know bug, thought everyone knew about it. I wonder how you can say you don’t have any issues, lol. Unless you are using the Mooney mod you should have noticed it. The mod fixed it but changes performance which makes it unrealistic.
Carenado already acknowledged it and said an update was coming, but it didn’t yet.
Don’t know if this issue exists on the other planes because I just bought the Mooney.

Sorry, but I think is a long way from unflyable or unrealistic. You`re always so harsh. I just set the throttle at 15%.

If it’s the latter, I’m flying the C170B nearly every day for multiple flights per day.

Gentlemen, I think we have been trolled.

For me their Aircraft are just fine when it comes to flying, the only thing that aint working for the Carenado Aircraft are the Tablets, the Done Key aint working on the tablets on the Xbox Series X on PC they work fine.

Now as a Carenado Reviewer I know they are working hard on updates but eahc time they fixed something a new sim update would come out breaking it again before they even had time to push out the update, so lets hope it goes smootly this time around and that the updates come quickly.

Maybe you’re not hit by a Caronado-bug, but the live weather bug instead? That bug affects all planes, including Asobo’s.

Do you have taxi/landing lights that actually project light into the environment?

I’m on the Series X and I can see the C170B taxi/landing lights come on and glow at the lamp itself, but they don’t actually produce light that lights up on the ground or in the environment around the aircraft. I like night flying, which makes taxiing/landing difficult. The rear nav light def casts light as you can see the pool on the ground behind the tail wheel.

The YMF5 has lights that seem to produce light in the environment, but only as very, very small pools directly beneath their lamps (as if they are aimed straight down) and, as such, don’t work as taxiing/landing lights in the dark.

Interestingly, I do not see these issues on the PC.

I, too, have been in contact with them. I’m curious if their other aircraft have a similar lighting issue. 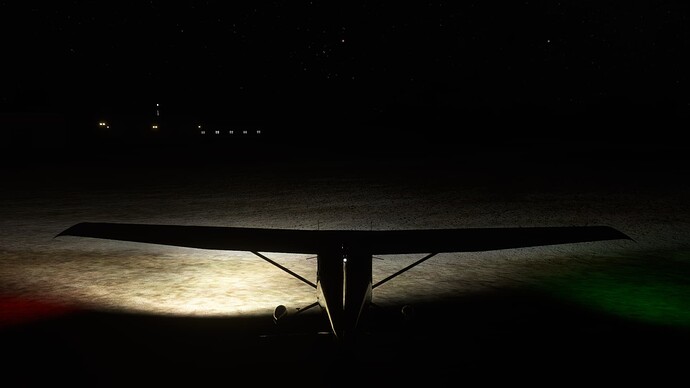 What hotfix? You mean the beta?

The weather don`t bothers me, but if complain makes me normal I bought a T-45C and the HUD doesn’t work (probably I have to change something on my graphics setup) I just stop playing with it for now. And sometimes the magenta line from GPS is not correct.

I’m having the similar problems with the Seminole and Seneca autopilot. After the airplane is stabilized on the HDG and ALT TRM on the plane starts to bank out of control. The flight director is too sensitive and the autopilot can’t seem to correct itself. Any one else have a similar experience. I suspect FSUIPC7 has something to do with it.