Really enjoying this app so far in VR.

I think it’s just a matter of clicking on it like a poi or loading it from another flight plan file.

I always like to have my Garmin loaded up, so I typically will sync to MSFS, Sky4Sim and LittleNavMap.

Lately I’ve been sticking with just the MFD when in an equiped airplane. One big reason is that VR menu bug. But I thing that is fixed in SU8.

Anyone else notice the time is one hour ahead since SU8? (UK/GMT). It’s an hour ahead of my PC time, was just fine before this update.

Mine is okay on UTC but it’s hit or miss on if it shows proper local time.

Yup, One hour Ahead in NYC. Just bought it…

Is there a way to have the pad remember it’s position in the VR cockpit when closing / re-opening?

I don’t think there is any way for VR window positions to be saved.

There is a 2D manager but that works through Windows managing monitor position. In VR, they are still contained in the main window.

UPDATE: v1.3.0 is now out. Anyone have the changelog for this, can’t find it.

How cool is the pilot logbook- 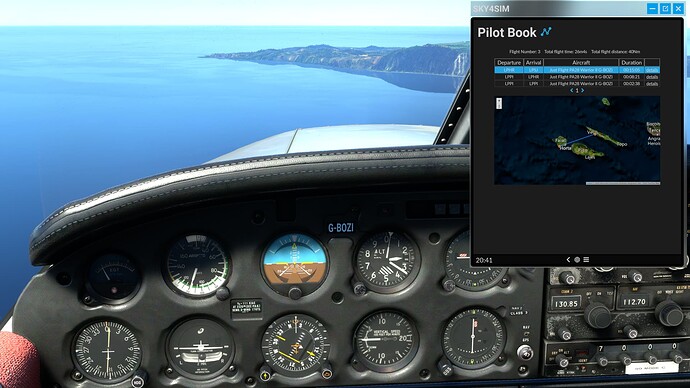 You can click on previous flights to show them on a zoomable map. Way cool. Thanks to dev for this update.

The bush trip option and the pilot logbook are very cool news.

There is a problem in the flight plan. it doesn’t read directories if you have some.

I don’t use the flightplan feature on sky4sim so can’t really comment on it. I also haven’t done a Bush trip in ages because of all the issues that there have been with them. They seem too bugged for my patience. I’ve also done 2 full bush trips that now show as 0% completed according to the sim.

Anyone know how to tame the mouse scroll wheel down in the map? At a minimum it zooms 4 levels. I have my system settings set to scroll 1 line at a time.

The bush trip option from Sky4sim allows you to fly any parts of any bushtrip with the plane you want and at the time you want.

As soon you complete a part of the bushtrip in the game, you have a checkbox checked in sky4sim whill allow you to know what you’ve done or not.

And you can see the length of any part of the bushtrip you want to fly.

It helps if you have the bug of navigation in the bush trip as you have the flightplan in sky4sim. With a buddy, we try that new option, and he has the navigation bug. In that case, as we played it in multiplayer, the one who has the bug has to follow the other one. With the import flightplan from sky4sim, he has a navigation plan which is a walkthrough for that bug.

Will need to give it a go. Will the sim still see the Bush trip as having legs completed? It’s got me intrigued now as I got fed up with Bush trips because of all the issues. I may have to give them a go again.

My mouse scroll with one scroll ‘click’ does same zoom in/out as the - and + icons on the map itself. Are you seeing more zoom that a single click on those icons?

Thanks, it could be another mouse setting then. I think smooth scrolling can cause odd things.

I have a Logitech MX3

Well I always have this running and with around 10 flights since the update nothing has gone in to my pilot log at all so idea what is going on there.

Can’t get this application to work…it doesn’t show up in the toolbar, can someone explain which part is supposed to go in the community folder ?

You can click on previous flights to show them on a zoomable map. Way cool. Thanks to dev for this update.

Yes and its nice how it saves landing speed and smoothness as well!

It would be great if it could save and show the actual flight path, instead of just a straight line between departure and arrival airports