It depends, like I’ve reported in the VR forums I’ve better perf in VR with the Index since WU3, not much more but definitely a little more, not worse. I’d very much like you let me know if my suggestion above is helping you though.

It’s not a graphics bottleneck. I keep buildings at Medium. I could run them on high most of the time, but in busy areas like LA, NYC, etc, that starts kicking the ■■■■ out of my performance. Medium is a good compromise.

The other settings have no effect from low to high.

The only one that has an effect is Terrain LOD. I keep it at 75. Any lower, and I see no increase. If I raise it up from there, I see a decrease in performance.

Are you running with photogrammetry off?. Buildings will only affect your performance if there is custom azure autogen outside the surrounding photogrammetry area like London.

All my online Bing settings are on. My settings have pretty much been the same since launch to be honest. Originally I was getting 40-45-ish fps. As subsequent updates come out, that performance is slowly being chipped away. This last update was the biggest performance hit I’ve had in a single update yet.

It is recomended to have installed the game and the content like comunity folder and oficial folder in another drive? i have installed both in the same drive, it is worth for the stutters?

Yesterday I was flying over Ireland and I spotted something different indeed in VR (didn’t try in 3D).

I’ve noticed anytime I was on the ground rolling on the taxiways and runway, and depending on the direction I was mostly looking at, up to around 500ft to 1000ft AGL, there was something taxing the perf. I could see this indirectly in the form of a little bit more (sometimes some much more) wobbles with motion smoothing enabled. Once above a certain height it was not longer exhibiting this but “normal” motion smoothing wobbles (meaning as expected but no more). When landing, all of a sudden again, maybe about below the same height AGL, wobbles where back down to the ground up to the parking spot.

The only way to lessen or nearly to eliminate these was to lower Terrain LOD down to less than 50%. I believe there is indeed something amiss with the rendering engine when below a certain height. It could be Pixel/Vertex Shader maths based on height having a bug causing extra loss of perf, it could be rendering engine sending some data only below a certain height and causing extra load, I don’t know, but the link to the Terrain LOD makes me think it relates to the same perf limitations I was noticing when I started “My VR” topics:

My limited understanding of the FS2020 rendering engine makes me think there is a problem in the CPU/GPU sync when streaming large amount of vertex buffer data, and this could be one contention point causing the perf issues. In effect, TLOD is not only affecting ground texture LOD ring distances, but it is also affecting buildings and trees LOD ring distances (they multiply each other, for example: building_lod * terrain_lod).

This means the higher the TLOD, the more geometry to stream to VRAM, not just the more textures. I can sense Trees are less taxing in general and I believe it is because there are less different models to render and therefore it makes an effective use of geometry instancing. However buildings are more varied and with photogrammetry, the mesh complexity inherently translates in even more geometry to stream (and I’ve posted somewhere lately in these forums a screenshot showing the unnecessary and unoptimized mesh complexity over London).

Having said this, I’ve also seen WU3 oversubscribing VRAM when flying over London and this leads me to think the PG mesh is either too complex for the amount of VRAM, but given performance issues are reported from many other places since WU3, I rather think there is a bug in the vertex buffer handling and the rendering engine might just be allocating new buffers while previous ones are not free yet, and/or there is a bug in the CPU/GPU fencing when updating the data in the existing buffers.

NB: It might have been there already in my previous flights but I didn’t pay much attention either. I might be entirely wrong as well in my analysis, otherwise this might give some pointers to a solution for the devs.

There’s no recommendation to do this. I did it because it physically separates my OS and main game files from the sim content / cache locations. Plus it prevents my main OS drive from getting filled up as quickly.
Theoretically, you can read data much faster from 2 separate NVMe drives than you can from a single drive. In all honesty though, I’m not sure how much of a difference it makes, if any at all. Once the main sim is loaded, Resource Manager really only shows the sim accessing the drive with the content.

I was mostly looking at, up to around 500ft to 1000ft AGL, there was something taxing the perf.

A few months back someone experienced exactly the same in Tokyo (RJTT). I could not repro. Was in an Icon. (I am not going to search ;p )

Edit: Tried to search, but guess you cant search on closed posts… Anyways, the FPS would drop by about 15 when 700ft was reached, then at 1500 or 2000ft it would go back to normal. The user even posted a few videos.

Now that I’ve written this and gave a couple minutes more thoughts, the first thing I can think of being displayed only below this height is grass. I won’t run FS2020 until much later today but I’m wondering what if setting grass to the lowest value or off.

Performance depends on thow the MB is using the NVMe drives. I have an INTEL Z490 ITX build.If I’m, using my 2 NVMe’s at the same time, the peformance drops by 50%. The design of the MB uses just one PCI lane.

The design of the MB uses just one PCI lane.

That is horrible. M.2 should be 4 PCI lanes. But I guess it is all to do with how many lane the CPU provides, after GPU, there is not much left with consumer grade CPU’s.

I know. However, the small ITX boards are kind of restricted. Didn’t know this. Only found out by doing performance tests.

Yeah, I wonder if many overlook the bandwidth limitations of SATA connectors and M.2 slots. I can get the full bandwidth of both of my M.2 slots (PCIe/NVMe in both) as long as I avoid using certain SATA connectors that share the bandwidth. Also, M.2 is the “form factor”, these slots can use SATA or PCIe (with/without NVMe support) based storage - PCIe being more expensive but faster. For my motherboard the bandwidth sharing is as shown below: 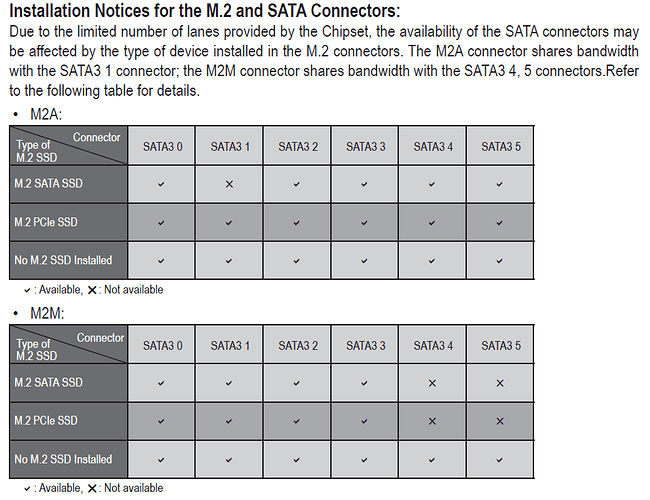 Its all about RAM!!! I had 32 gigs Gskill cas14@3200mhz, an rtx 3090 and a 9900k @ 5ghz, at Terrain LOD 6 Object LOD 2 used 70% of my memory on average but also had a windows page file going thats 26 gigs, thats the killer causing Limited by main thread, At max garphics LOD 2 even was not good. 64 gigs ram, LOD 9 for terrain and LOD 4 so far for Objects. Smooth with all graphics settings jacked up. resolution scale even. I have msfs on an nvme and a seperate nvme for community folder. Now im trying to sqeeze the bandwidth. have a 40mb line waiting for a 150mb upgrade Gsynch and In game vsynch 30fps this is awesome now

LOL just posted this reply to your other post!

@MrTonySM Your post is making realizing something indeed! Yesterday someone was enquiring about why is it Task Manager was reporting his GPU was “allocating” more RAM that what’s available onboard. And I’ve answered this is normal because the API (DX11 for example) is allocating RAM to store buffer data when you pass it to, then is keeping some buffer data in RAM even after streaming the data to VRAM, in case the buffer is discarded and need to be re-uploaded later to the video card. This is no…

All I know is I thought this game was broken untill I got the other 32 gigs yesterday. i almost fell over when it loaded up. even smooth in the loading cut scene. take offs and landings.

The other big killer is bad freaking Liveries. They cause MSFS to hang, so to speak.

Thank you sir!!! I think you picked out what I stumbled upon

You inspired me, I am getting 64gb of RAM tomorrow morning - will report back if it fixes my stutters