Some struggles with NAV AP and midair changes

Although I mostly tend to have control I still seem to struggle with AP if I do any midair changes at all. So wondering if someone could clear up it’s me or the Sim.

Example:
Yesterday was flying King Air Hong Kong to Hanoi. I originally had setup the plan to go to ILS 29L; however I could not find any ILS for that (though I guess I could’ve used 11R and done reverse), so I changed the plan midair by going into prosedures changing runway in approach to 11R Z and then pressing «load and activate».

I resubmit the plan to Ingame atc and they tell me to go completely off course. However I believe I’ve heard atc is buggy on this so I just ignore.

Getting closer to the airport I see on the map that my route seems to have correctly created a ‘go around’ loop starting around the final of 29L. However when I get to the point where the plane should turn right for the loop it suddenly turns hard left and go slightly off the direction of 29L. I’m thinking ‘oh well I’ll just fly around manually until I’m on the last leg and then enable ils.’

Getting to the last leg I change CDI to Loc1, turn on NAV and approach(my experience is that approach requires nav) and I’m below the glide slope. However the plane doesn’t adjust with the LOC and the glideslop doesn’t “stick”. The latter has sometimes also happened to me before without me understanding why. (I thought it was maybe Yaw dampener so I’ve started turning this off before approach, but apparently not)

Any clues to what the causes might be? Of course I was able to put down manually, but it’s quite frustrating feeling the lack of control of the AP. Do I need to reinitiate it somehow?

No, Approach does not require nav.
Nav controls your in flight path.
You can approach an ILS on Nav in a lot of aircraft, and the ILS will take over and Nav will turn off.
Having nav enabled, you “might” pick up the localizer, you certainly won’t get the glideslope.

Yaw damper is a function that prevents an aircraft from doing a “Dutch Roll”. (you may want to goggle that term to learn about it).
It shouldn’t be turned off in flight.

I’m not sure the real aircraft even keeps the autopilot engaged without the yaw damper. I did fly Kingair in real life but that was over 10 years ago, not 100% sure anymore.

Yeah, that is why I put the might there.

Your input in these forums are greatly appreciated.
I hope Asobo takes your advice on aerodynamics seriously.

Are you using the G3X from Working Title which replaces the stock G3X on the King Air (hint: you should if you fly this plane regularly). The big difference that matters in your specific case is that Working Title coded some workaround changes to prevent the infamous U-turn that the stock Garmin would execute if you happened to be between ENR waypoints before the final destination, and chose to load an Approach with Transition. Sounds like that’s exactly what happened to you.

Secondly, the issues you are facing aren’t the Autopilot, it’s switchology (pilot error). When you are on the Localizer (and before you pass the Final Approach Fix on the Approach), you should be in APR not NAV. Assuming you have selected an approach with both a Localizer and a Glideslope, all three things must have occurred: 1) Before the FAF, your are in 2) APR mode and 3) you are at or below the altitude fix of the FAF to catch the GS from below. Charts would be helpful to you to determine where in the Approach you are and the corresponding Altitude Fixes. For that, there are many paid and open source solutions, but I often recommend Little Nav Map, which will read the Navdatabase directly from the sim and protray it to you in a top-down sectional view in a separate window. Very, very useful. 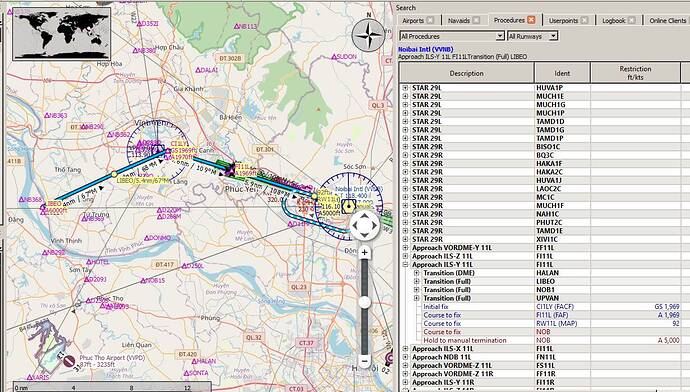 So basically the last issue with it not properly working with the approach loc/gs was due to me probably turning on nav and not just approach then. I’ll leave NAV out of it next time I manually fly into glideslope range and see how that goes. Will turn on YD and leave it on for the entire flight from now on as well, Thank you!

Nope, using the default built-in one. Will see if I can find the G3X from working title in the Marketplace on Xbox. I think I’ve only seen the G1000 one so far.

My last issue is for sure switchology, as you call it. That is clear to me now and hopefully with yours and Sevenflyer’s explanations I’ll be able to do this right in the future!

But my first issue is prior to me changing CDI or pressing the approach button at all. It’s basically that I made a change in the flight plan in flight which shows up correctly on the map on the G3X, but the GPS doesn’t seem to pick up on it and leads me a completely different direction.

Thanks a lot for taking the time to respond!

CDI will automatically switch from NAV (which in the future will be referred to as FMS) to VOR1/VOR2 (which are placeholder names for the NAV1/NAV2 radios in the COM stack). That switch will occur as you approach or pass over the FAF. No need to manually switch. Most likely it will happen before the FAF as the LOC is often picked up as far as 3 miles before the Outer Marker.

Working Title G3X and G3000 are available as Community Mods directly from Working Title’s Aero Page below. As they enter Early Access like the NXi, they will then become available on the Marketplace. But for now, download and install just like any other Community Mod.

Also consider joining their Discord Server for real-time answers on the G3X using the Garmin Channel.

Check out the Working Title Simulations community on Discord - hang out with 17,949 other members and enjoy free voice and text chat.

CDI will automatically switch from NAV (which in the future will be referred to as FMS) to VOR1/VOR2 (which are placeholder names for the NAV1/NAV2 radios in the COM stack). That switch will occur as you approach or pass over the FAF.

This has only happened to me once I think? Usually I have to change CDI manually when I get onto the final and see the G appear and moving downwards. But maybe I’ve just been impatient and haven’t reached the FAF yet… Or is toggling approach first needed for this to happen? Usually I change the CDI as stated above and then toggle Approach and then it works from there.
Edit: From reading your post once more I understand that it should be toggled prior indeed.

Sadly not able to install anything outside the marketplace on Xbox, so will just have to wait there

. Will join the discord when that happens.

the infamous U-turn that the stock Garmin would execute

This is definitely a weird issue, but can be “ridden” out as the AP will ultimately come back ‘round and resume the flight plan. Of course, how long this takes depends on just how far away the erroneous waypoint it wants to fly to is.

It’s a bit of a struggle with the stock GPS units when something goes not to plan. If you mess up an approach or select the wrong one and then want to change it, the ATC and/or the flight plan can get really weird and difficult to fix. For instance, with the stock GNS series Garmins, you can’t delete USR waypoints that get stuck in the flight plan when you make these on-the-fly changes. At least, this has been my experience.

Here’s the good news, though. Working Title will be implementing their awesome sauce on bringing these units up to the level they have done with the NXi. It’s just a matter of waiting for them to get to that stage. The future is bright.