i am really fed up because i actually spent more time to set up that bugged game instead of even playing properly.

Even with the highest settings i am getting blurred textures and my airplane looking like fs9. Chile. Anyways, one of the problems is in the screenshot.

What is the solution? And am i being payed for fixing this?

Cause i have the feeling i am a developer now instead of a gamer. 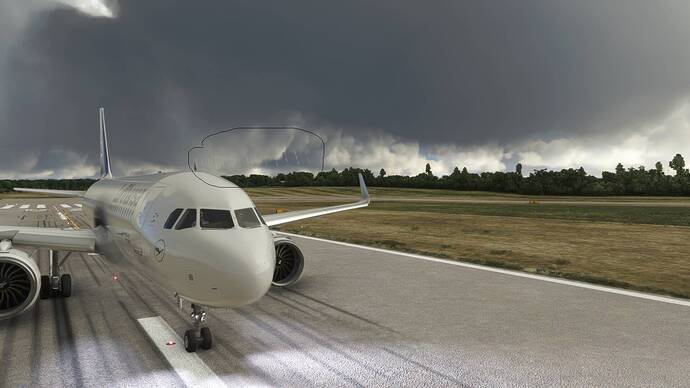 Give us some context. What are your rig’s specs and what airport are you at?

This appears at every airport with every object. Even gras is doint these reflections when moving.

Assuming your GPU can handle it, adjust the LODs in the CFG file. I’ve also noticed that the bug that requires one to reset their graphics settings pre-flight is still there. Toggle from what you have to low end then back to what you’d normally use pre-flight on the tarmac(or wherever you start your flights). I go from Ultra and then some to low-end then back to my normal settings.

Do you have any manuals to this? Maybe a YouTube Tutorial or a Thread?

Is that really a GPU thing? That problem really occurs just with FS2020. It runs smooth with some micro stutters. But that bug is really annoying.

Search the forum. There are tons of posts on how to do it.

“I am really fed up because i actually spent more time to set up that bugged game instead of even playing properly.”

Microsoft? Please hire me as a game tester. Cause thats what i am doing right now

Please don‘t get this as offensive or calling you out, it‘s not.

I can’t speak for XP but I assume it‘s similar. In P3D you spend a couple of days with a new computer to set up your sim to your liking. These sims are so highly complex that a simple set and forget mentality will not work. You have to tweak such a system extensively to your computer hardware (and software) which takes research, compromises and all above patience. Lockheed release updates much less often so there is indeed a lot of time to fly once your sim runs properly, but with Asobo we currently have significantly changing versions almost every month. The next SU will change it completely again as a lot has been messed up and requires fixing. Variables will change, others will be added. We are in a process of constant tweaking. What Asobo has done in one year has happened at Lockheed Martin in one decade, 20 years actually if you take FS2004 and FSX too.

The thing is that a flight simulator (and I swiftly ignore the xbox now, sry guys

) has to run on thiusands of hardware puzzles, which is normal for a PC game. However on top of this comes the very special to flight simulators situation, that we add hundreds of addons to our game and it still has to be able to do that.

While I type this I can‘t but think of Witcher 3, where I modded heavily, be it HD face mods, weapon design, reshade, UI, even gameplay changing mods. All that has to be run through a mercher and there was a LOT of manual work to be done on the player side to ensure compatibility and sometimes it would simply not work.

In a flightsim the developers are traditionally required to make sure that the armchair pilots can throw in whatever they want and it will work without much headache. Also the sheer complexity of a flight sim not only on the visual side requires a lot of computer power, definitely much much more than „a simple game“. That‘s why we shouldn‘t look at a flightsimulator as a game but rather as a platform, a base on which we build our personal sim experience and adjust it to our PC. I think this mindset hasn‘t found the way to Asobo yet, Microsoft however should know it. We are traditionally a crowd of modders, hobby developers and there is a huge and growing business behind flight simulation, think of PMDG etc, enterprises whose CEOs can hold several private aircraft like a DC-3 (!).

To reach a state where all of these partys can work together in a productive and efficient way there is still a huge amount of work (and changes) required at the Asobo end and this will naturally bring many hours of frustration and tweaking for us. This sim has been rushed just as FSX has been rushed to be dropped. Currently we need to be Mr. Miyagi catching a fly.