Posting on behalf of a friend right now, he’s currently trying to fly the 747 YMML to KLAX and the flight plan looked fine on the planning page however…

Some way through the pacific (Just about at Fiji…) his flight plan seems to divert along the equator for a distance we’re not able to determine, we checked the FMC and we can’t see any waypoints that’d be out of the way like this, we even tried removing a stack of waypoints ahead of the last good way point in the legs page but no matter what we do the flight plan looks like we’re going to go haywire at this point, we suspect it is a visual bug, but you can see it on the VFR map as well.

Any ideas on what is happening here?

EDIT Looks like there’s a waypoint in as a gps coordinate (07W70) which can’t be removed or replaced in the LEGS page, it seems to be hard coded in… this point in space seems to be after the last normal waypoint.

We even removed every waypoint in the flight plan after the last good waypoint and it still seems to want to navigate us to some phantom location behind us. Broken!

The last good waypoint is BIDAN, after that we cleared everything and even tried going direct to the intial point for the STAR into KLAX, the navigational weirdness remains. See picture! 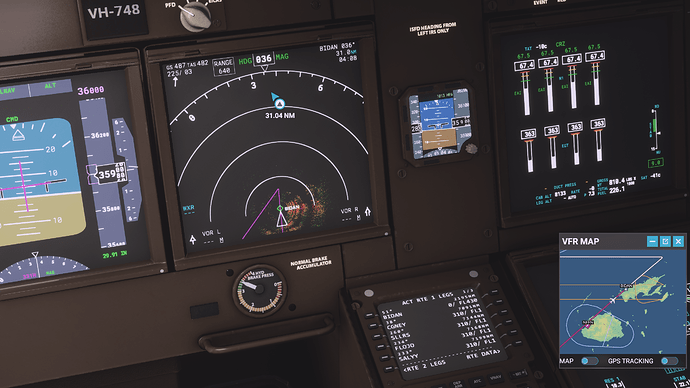 EDIT Again! the moment of truth passed and once reaching this phantom “bend” in the flight plan , the plane teleported on the map about 200nm AHEAD where the flight plan resumed as normal. dragging the VFR map across this phantom line caused the map to warp along, I wish I could explain this better I’d really need to video to show you what is happening.